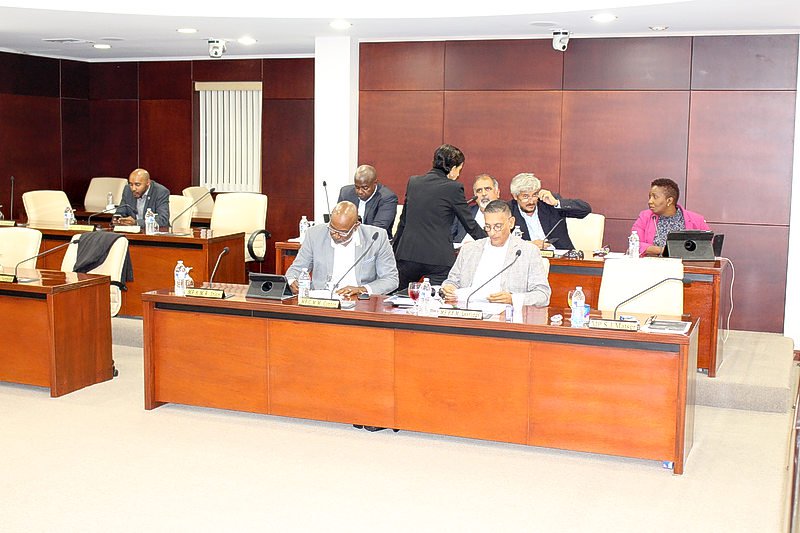 PHILIPSBURG–The Parliament of St. Maarten convened an urgent public plenary meeting on Thursday discussing the declaration pertaining to the willingness of eight Members of Parliament to join together and form a new Government for St. Maarten with the objective of breaking the impasse on Dutch aid on the basis of mutual trust and understanding.

The meeting was set for 2:00pm, but President of Parliament Sarah Wescott-Williams adjourned the meeting on the request of National Alliance (NA) leader Prime Minister William Marlin who said on Wednesday morning that he had sent a message to the leaders of all three parties inviting them to hold talks to arrive at a national Government for St. Maarten, given that everyone was on board for the interest of the St. Maarten people.
He said this would be a way to put the interest of St. Maarten above party politics. Marlin made the announcement during the Council of Ministers press briefing on Wednesday.
Eight Members of Parliament had formed a quorum for that meeting on Wednesday. Marlin had said during the press briefing that it was through a national Government that parties “will be putting our people first and putting the interest of St. Maarten first.” He said, “In the Netherlands they have their agenda and they have closed ranks politically and they have gotten everyone together to promote their agenda. In St. Maarten, we are divided.”
He said that when he stood up to the Dutch; it was not in his personal interest, but rather in the interest of the people of St. Maarten.
After the meeting with the party leaders, the Parliament meeting was reconvened by Williams at 5:00pm.
Member of Parliament (MP) Claret Connor started off the meeting by giving an outline of events that had taken place leading to yesterday’s meeting. He said the present Government is led by a personality.
“Parliament passed a motion instructing Government to consult with them on a weekly basis and nothing took place. The Government has changed their standpoint on accepting conditions from the Dutch Government when it comes to receiving aid funds, at the 11th hour. I would call it ten past twelve.
“This political impasse is not about the people for the prime minister. Because your position is in jeopardy, you want to accept conditions,” stated Connor. He said it is incomprehensible and unacceptable for the people of St Maarten to be constantly pinned in corners because of the constant display of incompetence and lack of concern by the Government.
“We are approaching two months since the passing of one of the most catastrophic disasters in modern history and our Government chooses to have a tit-for-tat, headline-grabbing and public discourse with one of the partners in our Kingdom over what, in my opinion, are non-issues.
“Mind you it was only a few months ago or just prior to Hurricane Irma that the Prime Minister of St Maarten, William Marlin, was in Parliament defending his position on the agreement and claiming victory regarding reaching an agreement with The Hague about the Integrity Chamber. He now claims that the Kingdom Government is using the same issue as a conditional beating stick in exchange for relief aid that our country and its people so desperately need,” said Connor.
“It was also this Prime Minister, based on a motion of Parliament almost one year ago, who was given a mandate to handle the border issue with our counterparts on the Northern side as well as with our Kingdom partners.
“To date Prime Minister Marlin has accomplished absolutely nothing in these urgent matters. Our Prime Minister has proven that these tasks, which require effective leadership and diplomatic abilities, are insurmountable for him and his cabinet to achieve,” Connor said.

Minister Plenipotentiary
“The Prime Minister needs to explain to the people of St Maarten what our Minister Plenipotentiary in The Hague has been doing on the diplomatic front. News coming out of the Netherlands followed by some of the attitudes displayed by many persons in the Netherlands (politicians included), is that St Maarten is riddled with criminals and mafia activities,” said Connor.
He told The Daily Herald on Wednesday night that he is asking Prime Minister Marlin what the Minister Plenipotentiary has done on the diplomatic front to quell these negative allegations. Specifically, what has her role in the past two months been during these recovery talks? How many ambassadors have we spoken to and was there any follow-up to these talks? What are we accomplishing outside of the picture ops? What exactly are we getting out of our resources and investments in The Hague? he asked.
“Prime Minister William Marlin may try to continue to fool those who are willing to accept his flip-flopping blindly. This parliamentarian, however, those supporting the new majority and the people of St Maarten have had it with this public display of incompetence and the time for change has come,” Connor concluded.
The meeting was postponed after Member of Parliament Frans Richardson was critical of the SXMstrong coalition. The urgent plenary public meeting continues this morning where a motion of no confidence is expected to be presented by the new coalition against the William Marlin cabinet.