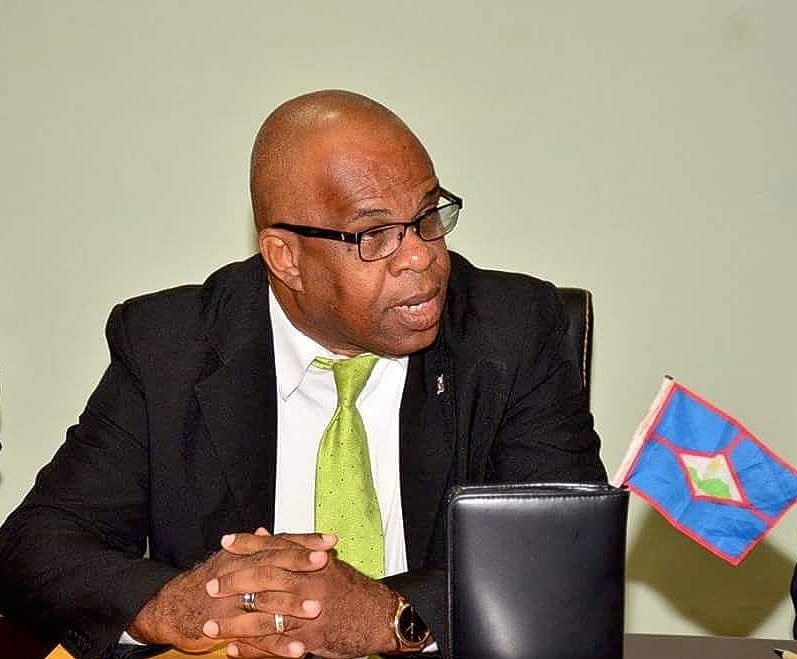 ~ For inciting violence against militaries ~

ST. EUSTATIUS–After three days of silence, Island Councilman for Progressive Labour Party (PLP) Clyde van Putten took to the airwaves on Tuesday to offer his apologies to the people of St. Eustatius regarding his statement made on October 9 during a congress of the organisation Korsou Fuerte i Outonomo (KFO) in Curaçao in which he threatened to “kill and burn” Dutch militaries if they come to his island.

“It was in no way my intention to incite or to make any threats with regard to killing any Dutch military personnel or any Dutch individuals for that matter,” Van Putten humbly stated.
“I am not too big, if I have erred and made a mistake, to come and apologize for this. I believe the statements that were made were uncalled for. I believe it was irreprehensible. I believe that it is a statement that I must distance myself from at this point in time, because it indeed is not something that we as a country and we as a people tolerate.
“Therefore, I come to you the people of St. Eustatius to say to you today that I deeply regret the statement made with regard to killing and burning of the military, because this was no way my intention and for that I humble apologize.”
He said Tuesday he was invited to speak at the gathering on the occasion of the seventh anniversary of Curaçao attaining full autonomy within the Kingdom. He made a presentation about Statia’s experience over the past seven years.
“During that presentation, the words ‘kill and burn’ came forward,” Van Putten said, adding that it was not his intention “to incite any form of violence or hatred as is being insinuated.”
He said that over the past several days, without hearing the entire presentation, people with “malicious and political intent” had taken parts of his video-taped speech and used the “kill and burn” statements “for their own political agenda.”
He said these persons had tried to put him in a negative light. “There has been wide discussion and condemnation from home and abroad and certainly this did not contribute in any way toward the agenda we [the Island Government – Ed.] have set in moving forward.”
One of the main points on the coalition’s agenda is the “fight” for a more autonomous status within the Dutch Kingdom, Van Putten said.
“I want to state here this morning that despite all that was said and done over these past several days, that commitment and that resolute and principle decision, taken in regard to the constitutional future, will continue unabated.
The statements made by the PLP-leader led to much criticism at home and abroad. The Dutch Government is in the process of filing an official complaint and the Democratic Party (DP) of Statia called for a debate in the Island Council, which will be held on Thursday.
Coalition partner Reuben Merkman said he hoped that Van Putten would find it in his heart to offer his apologies.
With regard to the official complaint Van Putten said he would “take full responsibility” for his actions. “Whenever that case is called [in Court – Ed.] I will appear and will address the issue at hand. Whatever the consequences of this statement, I am fully prepared to accept it as a citizen and also as a representative of the people of St. Eustatius.”
He reiterated that his statement was “unwarranted” and “uncalled for” and once again apologized “to all those individuals at home and abroad who have been deeply hurt and affected by the statement that I made.”
Assuring that he “deeply regrets” the statement, the Councilman stressed, however, that he “remains committed to the cause of fighting for more autonomy, to giving the people of St. Eustatius the freedom, the deliberation and respect that they deserve as a free people.”
Despite calls on social media for his resignation, Van Putten said he is not considering stepping down.
The Prosecutor’s Office, in the meantime, has launched a preliminary investigation, after which it will be decided whether the politician will be criminally charged, spokesman for the Prosecutor’s Office Norman Serphos said on Caribisch Netwerk website.