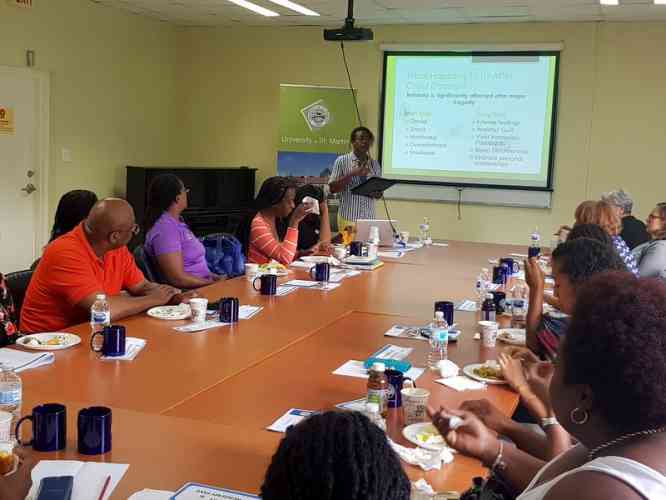 POND ISLAND–University of St. Martin (USM) hosted its 3rd annual roundtable discussion: “Breakfast with the Counsellors,” at the institution on Friday, November 16.

The presentation was led by General Liberal Arts Coordinator and USM Counsellor Leona Nestor-Hubert, who spoke on the topic: Irma and education: effects of crisis on academic performance. The open discussion that followed gave participants an opportunity to reflect on some of the challenges students dealt with after the passing of Irma and in some cases, are still overcoming. One of the counsellors mentioned that some students want to leave the island while others feel like their academic dreams are “busted” as they can no longer travel abroad to further their studies.

Other counsellors mentioned that their students are learning to adapt to their given situations. Some students are motivating their peers to keep pressing forward while others have even started a trend of “not using their phones for a day,” something many would find very difficult. Concerns were also heard of students who are now attending classes in the afternoons and getting home after the sun has set.

The discussion was also geared towards highlighting the role that USM can play in mitigating the aftermath of such crises. As USM now offers accredited degrees and courses, the team reminded counsellors that students are able to get their first degree at USM and transfer their credits to other universities or colleges to continue their studies. “USM has a record of producing alumni who go on to hold prominent positions both locally and internationally. Thus, USM can be seen as a stepping stone for most students that come through its doors,” said USM Education Division Head Sharon Freiburg.

An example is the Dean of Academics who started her academic journey with the General Education Diploma (GED) programme then the General Liberal Arts programme at USM and continued her studies in Canada to eventually graduate with her doctorate in Pathology and Laboratory Medicine from University of British Columbia, ranked among the top 40 best universities globally.

The team assured the counsellors that by providing students with the opportunity to jump-start their studies here on the island, they are helping to place students on route to accomplishing their academic goals/dreams. According to USM’s Marketing and Admissions Specialist Mitsha Shobhan Giterson, “staying on the island allows one to prepare physically, emotionally and financially before venturing abroad especially after such a crisis that may deter one from an original goal and dream.

It also allows students to gain work experience, invest in an affordable education (in contrast to other Universities in the region) and help support their families here on the island. We are here to provide the key to a brighter future which can make a huge difference in the success of the student.”

The event did not take place last year due to the after-effects of Hurricane Irma, but USM said it found it necessary to hold the event this year. “As we rebuild the university, we recognise that our role is not only to educate students but also to disseminate data, foster the exchange of ideas and promote intellectual discussions. These are exactly what Breakfast with the Counsellors seeks to promote,” USM Dean of Academics Dr. Rolinda Carter, said in a press release on Tuesday.