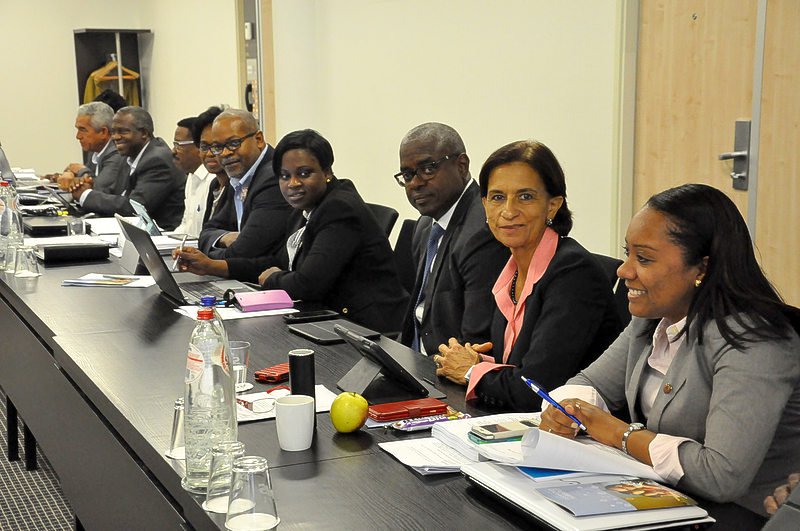 THE HAGUE–Aruba, Curaçao and St. Maarten will be presenting one common proposition for a Dispute Regulation (“geschillenregeling”) at this week’s Inter-Parliamentary Consultation for the Kingdom IPKO in The Hague.

The three Dutch Caribbean countries worked out the last technicalities during a tripartite on Monday, said Chairperson of the St. Maarten Parliament Sarah Wescot-Williams, who heads the St. Maarten delegation. The final document will be signed off so it can be presented at the IPKO which starts today, Tuesday.

The countries had already reached a principal agreement during an extra tripartite meeting in Aruba on April 29, in anticipation of the IPKO. But because the individual countries had added their comments to the draft proposal, there were some aspects that needed to be straightened out in order to arrive at one common document.

“We were a bit concerned at the start of the tripartite. So I pointed out to the other delegations that our main objective should be to have one common position on the Kingdom Dispute Regulation Law,” Wescot-Williams told The Daily Herald.

She said that the countries shared the same opinion that a Dispute Regulation should be established as soon as possible. During Monday’s tripartite, the countries worked out the few remaining technicalities. The President of the Supreme Court and the Dutch Attorney General joined the tripartite on Monday for a short while to exchange their view on the Dispute Regulation.

A solid agreement among the three countries is especially important now that Dutch Minister of Home Affairs and Kingdom Relations Ronald Plasterk has gone ahead with the process of establishing a Kingdom Law for Dispute Regulation without the support of the Dutch Caribbean countries.

Wescot-Williams was specifically referring to Plasterk’s proposal to have the Council of State act as the dispute resolution body, rendering advice which will not be binding in all cases. “Minister Plasterk has put aside the wishes of the Parliaments as expressed at the IPKO. The three Dutch Caribbean countries are clearly not in agreement with the Minister’s move,” she said.

The Parliaments agreed during the previous IPKO in St. Maarten in January this year that the Dispute Regulation would define three major aspects: it will be carried out by an independent body, the decision of this body will be binding and that it would cover a wide range. These principles have been incorporated in the draft Kingdom Dispute Regulation Law in which a special, newly established court would play a main role.

The support of the First and Second Chamber of the Dutch Parliament will be sought for the Dutch Caribbean countries’ common proposition. That support is cardinal, said Wescot-Williams. In fact, it will determine the merits of the IPKO. “Without the support of the Dutch Parliament, we need to ask ourselves what the advantage is of having an IPKO. Support for this proposition will prove the benefit of the IPKO,” she said.

Chairman of the Committee for Kingdom Relations of the Curaçao Parliament Elmer “Kadè” Wilsoe confirmed the importance of attaining the support of the Dutch Parliament. “We want to be clear on where things are. Plasterk has presented the same proposal three times. That shows a lack of respect for the Parliaments of the four countries,” he said.

Monday’s tripartite was also utilised to deal with other issues, such as the findings of the work groups in different areas including education, youth and youngsters, discrimination, integrity and public health. The St. Maarten delegation presented a paper of its government on these matters and shared the information with the other delegations.

The idea of discussing the placing of St. Maarten on the decolonisation list of the United Nations (UN) during the tripartite was quickly abandoned after Wescot-Williams told her colleagues of the Parliaments of Aruba and Curaçao that St. Maarten was not ready to be put on that list. “Doing so would be a regression,” she said.

Wescot-Williams said that the St. Maarten delegation was still looking into whether it would send delegates to attend the handling of a series of Kingdom Laws in the Second Chamber next week. The IPKO today starts with a formal opening session at the First Chamber, followed by a series of meetings.