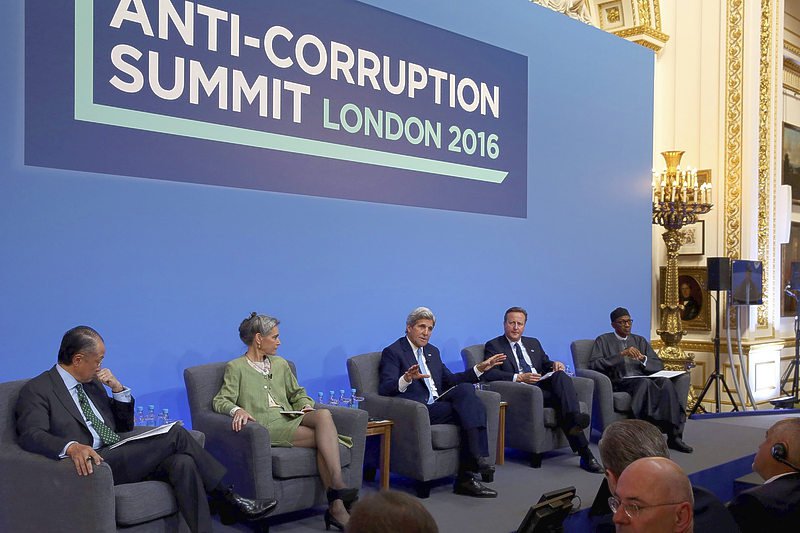 LONDON–Countries from Britain to Afghanistan pledged on Thursday to set up public registers of company ownership in a collective effort to make it harder to launder the proceeds of corruption around the globe.

Prime Minister David Cameron announced the steps at a global anti-corruption summit he was hosting; but critics said the registers might have no meaningful impact unless tax havens, many ultimately controlled by Britain, also ended secrecy. The build-up to the London event was marred by Cameron being caught on camera describing Nigeria and Afghanistan, which are both taking part, as “fantastically corrupt”; but he later said that the leaders of both countries were tackling the problem.
U.S. Secretary of State John Kerry, addressing a plenary session at the summit, said he had been shocked by the degree to which he found corruption “pandemic” around the world. “It is a contributor to terrorism in many different ways and the extremism that we see in the world today comes to no small degree from the utter exasperation that people have with the sense that the system is rigged,” Kerry said.
“We see this anger manifesting itself in different forms in elections around the world, including ours,” he said, alluding to the unexpected success of Republican Donald Trump and Democrat Bernie Sanders in the U.S. presidential primaries.
Britain, France, the Netherlands, Nigeria and Afghanistan pledged to launch public registers of true company ownership while Australia, New Zealand, Jordan, Indonesia, Ireland and Georgia announced initial steps towards similar arrangements. Kerry said the United States had already announced measures to improve transparency on business ownership.
The countries taking part in the summit issued a 34-point communique outlining pledges to tackle issues ranging from doping and match-fixing in sports to tax evasion and bribery. The summit organisers also published separate statements from 40 countries, each one setting out commitments for which, Cameron said, civil society, media and others should hold governments to account.
Under the new rules announced by Cameron, foreign companies that own a property in Britain or want to buy one or to bid for a central government contract will have to join the register. The aim is to expose those who hide behind obscure shell companies to own properties, a particularly acute problem in London which has been hit by repeated scandals involving luxury homes owned by corrupt foreign politicians and businesspeople.
“We await to see the detailed requirements, how it will be policed and the penalties for non-compliance in order to judge whether the proposed legislation will actually have any teeth,” said Chris Burdett, a partner at law firm Clyde&Co.
Critics said real progress on money-laundering and tax evasion would only come if tax havens were also compelled to open up about who owns offshore-registered companies. “Tax dodgers can still sleep easily tonight,” said Susanna Ruiz, tax expert at charity Oxfam.
The release of the “Panama Papers”, leaked documents from law firm Mossack Fonseca, put tax avoidance at the top of the global agenda by showing the extent to which tax havens were used by politicians and businesspeople from around the world. Anti-corruption protesters who gathered close to the summit venue, some dressed as bankers with bowler hats reclining on deck chairs as they fanned themselves with banknotes, said what was needed was an outright abolition of tax havens.
The British Virgin Islands, a British overseas territory that the Panama Papers suggested was home to more than half of the 200,000 companies set up by Mossack Fonseca, was not represented at the London summit.
Britain also seized the opportunity of the summit to bring forward plans to introduce a criminal offence for companies that fail to stop employees facilitating tax evasion, pledging to introduce legislation to that effect this year. John Milner, head of business crime and fraud at law firm IBB Solicitors, said this was a step in the right direction in tackling what he called Britain’s “unenviable and growing reputation as a soft touch for laundering dirty money.”
However, he expressed doubts as to whether the already stretched white collar crime investigating body would be able to enforce the new rule.