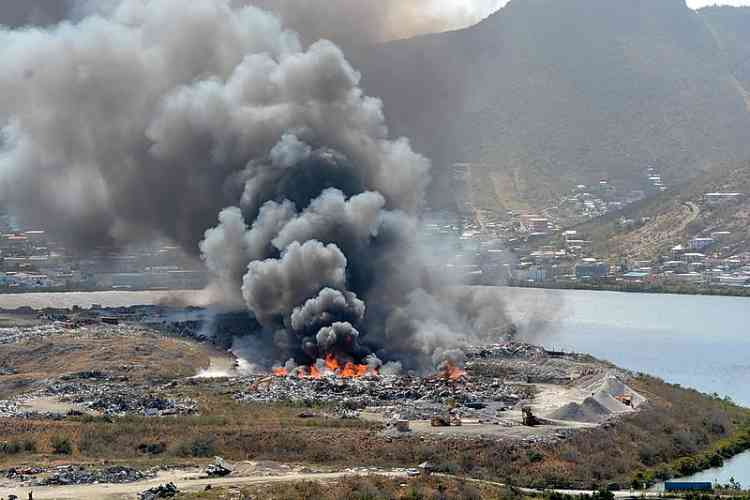 According to government, the Court of First Instance has underestimated the complexity of tackling the issues at the landfill dumpsite on Pond Island. (File photo)

POND ISLAND–Country St. Maarten has filed for appeal against the Court’s order to finalise the Fire Suppression Plan at the landfill dumpsite on Pond Island by May 1, 2020, at the latest. In case of non-compliance government will have to pay daily penalties of NAf. 10,000, with a maximum of NAf. 10 million, the Judge had stated on July 26.

In the injunction, which was later joined by the Prosecutor’s Office, plaintiffs requested that the Court order government and the former garbage dump operator to take effective measures to prevent the emission of smoke, gases and stench at the landfill and to conduct measurements of the toxic fumes and make these public.

In the 30-page petition to the Joint Court of September 6, attorney Caroline van Hees of Gibson and Associates made it known that Country St. Maarten is in total disagreement with the Court’s ruling.

The lawyer states that the case at hand is “too complex” to be handled in summary proceedings and claims that the case would “undoubtedly” be rejected in a court case on the merits.

Litigants had claimed that the “mountain” of waste at the landfill constantly emits gases, smoke and dust and is causing constant health problems to those living downwind. According to the litigants, the government approach to the problem left very much to be desired, because in recent years no serious plans have been developed to tackle the waste problem.

However, pending the injunction government did get started and results were achieved and the number of dump fires has been significantly reduced. Therefore, Country St. Maarten is of the opinion that Cannegieter, Koster and BZSE are no longer able to prove “illegitimate” nuisance as there are no longer any big and regular surface fires with large plumes of smoke. In addition, government took “all reasonable measures” it could take to prevent nuisance, Van Hees is stating in the petition to the Court.

Government feels that the case should be rejected as matters have improved considerably at the dump. In 2018 there were no fewer than 32 large and medium-sized fires at the dumpsite. Thanks to measures taken by government in 2019 that number has been reduced to only one fire in May 2019, which was put under control within a couple of hours.

“By focussing on the fixed idea that Government must be put under pressure [to take measures at the dump to limit nuisance – Ed.], the Court of First Instance has lost sight of all the legal frameworks of the claim,” it is stated in the petition, in which government also objects to the fact that the judge decided on his own initiative to impose “excessive” penalty payments.

Government is of the opinion that the Joint Court should annul the verdict as it could have “huge” consequences for government when it would be forced to pay the maximum penalty payments “just because the Fire Suppression Plan has not yet been completed.”

According to government, the Court has underestimated the complexity of tackling the issues at the dump. Words such as “manageable” and “ticking time bombs” are indications that the Court has used the incorrect framework in judging this case.

For example, the Court of First Instance should have taken into account that extensive and very expensive measures have been taken and that the nature, duration and seriousness of the nuisance has become virtually zero.

Government also objects to the imposed deadline of May 2020, as it upholds that the entire Emergency Debris Management Project could be delayed for reasons beyond government’s control.