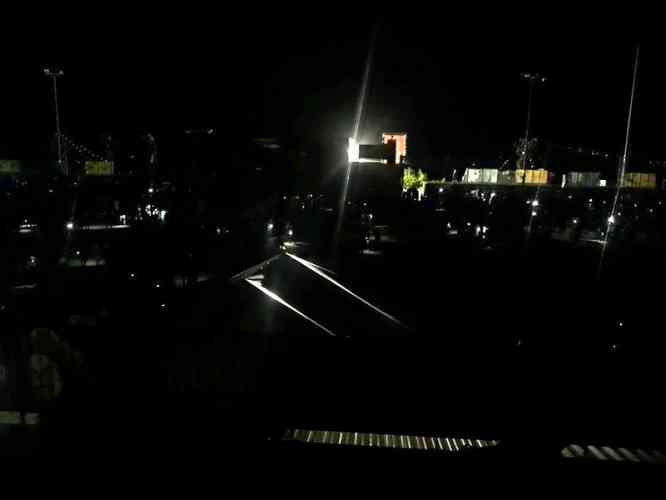 Carnival Village on Monday night during the blackout.

PHILIPSBURG–A full-scale Dutch St. Maarten blackout darkened homes, businesses and Carnival Village on Monday evening. The annual Youth Extravaganza organised by Teen Times had hundreds of youngsters in the Village in disbelief as they wanted to see more of their peers on stage.

The outage took place at 10:56pm and NV GEBE said power had been restored after midnight. GEBE technicians are assessing the situation and said they would give customers an update today.

Youth groups that did not perform hoped St. Maarten Carnival Development Foundation (SCDF) and Teen Times would organise their performances on a different day during this Carnival season. One parent told The Daily Herald it was sad that SCDF did not have generators in place to power the village.

Police announced on an intercom close to midnight that the show had been cancelled and children should call their parents to pick them up. The youngsters were escorted outside the Village and the disappointed large group waited for their parents to arrive.

Teen Times coordinator Mike Granger announced shortly before 2:00am that SCDF will afford Teen Times space on its Family Fun Day on April 29 to give the youth who did not get to perform the opportunity to do so. “We thank those young people and their parents who came out in full force to once again support a Teen Times event,” he said. “We will finish the job on April 29.”