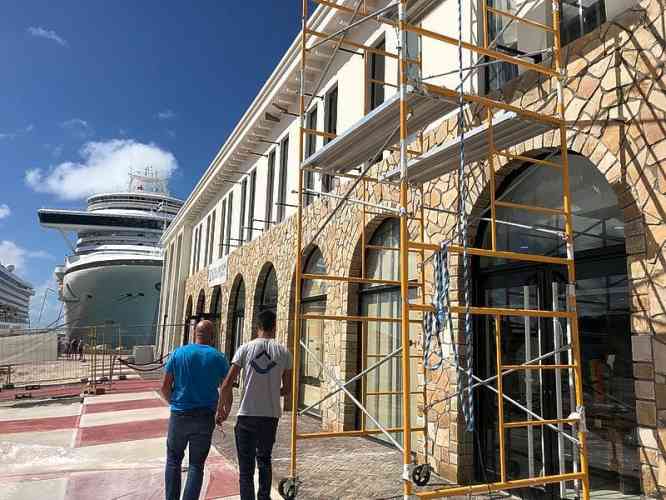 POINTE BLANCHE–Zebec Development N.V. has obtained permission from the Court of First Instance for a preliminary witness examination and the appointment of an expert, on Friday. The developer believes St. Maarten Harbour Group of Companies and others misled Zebec to enter into a settlement over the development of the Harbour Village project at the port in September 2015.

Zebec filed a request to allow the hearing of witnesses and for the appointment of an expert on July 17. It depends on the outcome of the examinations whether Zebec will start another procedure against St. Maarten Harbour Cruise Facilities (SMHCF) N.V., St. Maarten Quarter Development Company N.V. (SMQDC), Royal Caribbean Cruises Ltd. (RCCL) and possibly also other parties involved in the development of the Harbour Village project.

In August 2014, Zebec filed a legal claim for more than US $100 million against St. Maarten Harbour Group of Companies and its Chief Executive Officer (CEO) Mark Mingo for alleged breach of contract concerning the development of the Harbour Village project in the cruise terminal.

The Harbour Village was intended to be a collaborative effort to develop the 13,000-square-metre parcel of land adjacent to the cruise piers into “an unrivalled mix of shopping and entertainment” that would include, among other things, restaurants, bars and a lazy-pool.

Zebec and SMHCF closed an agreement about the development of the parcel of land in 2010. After the Zebec deal fell through, the property was developed by Ocean Drive Properties (ODP) N.V.

On August 25, 2015, Zebec and ODP closed a “commitment agreement” under which Zebec renounced its claim to the right of long lease and transferred all it designs for the project to ODP for an amount of US $5 million.

According to Zebec, SMQDC imposed restrictions on the development of the parcel of land to Zebec via RCCL. For example, Zebec was not allowed to realize more than 10,000 square feet of retail space and, moreover, the commercial development had to remain subordinate to the non-profitable facilities for recreation and entertainment. These restrictions had far-reaching consequences for the potential profitability of the project.

Zebec is of the opinion that the project never came off the ground because of the “lingering” and “sabotaging” position taken by SMHCF.

Zebec said it had settled for a relatively low amount due to the fact that it had agreed with SMQDC’s demands. Therefore, its calculation of losses could not be based on its original, very profitable plans, but on the modified plans that only provided for limited retail space and expensive provisions for entertainment and leisure.

Considering the content of the settlement and commitment agreement it was “obvious” that ODP would continue development from the point where Zebec had stopped, the developer stated.

The parcel that was developed by ODP, however, does not resemble Zebec’s plans. It consists exclusively of retail space in two buildings with a retail area of more than 10,000 square feet, according to Zebec and it has no facilities for relaxation and entertainment.

According to Zebec, SMQDC “apparently” abandoned its claims regarding the retail space and the nature of the project in favour of ODP before the settlement agreement between SMHCF and Zebec was signed.

Zebec, represented in these proceedings by attorneys Jeroen Veen and Jacob Cornegoor, say they have received “indications from a confidential source” that persons involved with SMQDC and/or SMHCF have an interest in ODP.

In addition, these circumstances may justify the suspicion that SMQDC acted unlawfully by making objections to the Zebec project based on improper grounds. That is why Zebec wishes to hear witnesses to clarify whether it was misled at the time of the settlement.

Zebec requested the appointment of an expert to answer questions about the total floor area of the structures developed by ODP and which part of the surface is in use or can be used as retail space.

Represented by attorneys Charles Rutte and Chris de Bres for SMHCF and Rogier van den Heuvel on behalf of SMQDC, defendants pleaded with the Court to turn down the requests as the Court would not be competent as the settlement agreement only provided for arbitration in Curaçao.

According to SMHCF, Zebec makes it look as if SMHCF, with or without RCCL, has sabotaged the project. It is their opinion that Zebec arrived at the conclusion that the project was not profitable enough and then worked towards termination with the “apparent” objective to file “a huge claim under false pretences.”

SMHCF denied that OPD was granted a more profitable project as it can only use a maximum 10,000 square feet for shops, as long as RCCL does not give permission for an extension. It refuted statements that Country St. Maarten, RCCL or itself are stakeholders in ODP. It also claimed that the agreement could only be nullified if it was closed under the influence of deceit.

SMQDC joined SMHCF’s pleadings and added that it upholds the requirement that the plot may have a maximum of 10,000 square feet of retail space. Zebec’s initial plan had four times the permitted retail space and the second plan had three times as much retail space as allowed and was, therefore, unacceptable, SMQDC stated.

The Court in St. Maarten allowed the preliminary examination of witnesses, as four of the five witnesses are residing here and also granted the request for a preliminary expert’s report.

Zebec argued that it has closed the settlement agreement under the influence of deceit, or at least that it has been misled. “It is conceivable that the actual course of events which Zebec wishes to bring to light by means of the witness hearing is of such a nature that Zebec could successfully file a case for annulment of the settlement agreement,” the Judge stated in his decision.

The Court did not immediately appoint an expert. The Court recommended parties to come with a joint proposal for the appointment of one or more experts.

In August 2014, Zebec filed a legal claim for more than $100 million against St. Maarten Harbour Group of Companies and its Chief Executive Officer (CEO) Mark Mingo for alleged breach of contract concerning the development of the Harbour Village project in the cruise terminal.