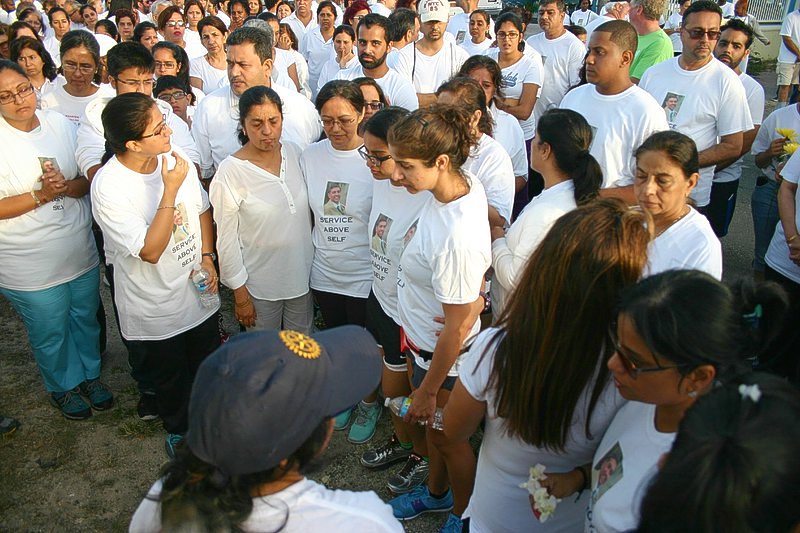 PHILIPSBURG–The man held responsible for the traffic accident on Airport Boulevard that cost the life of entrepreneur and former Rotary President Ramesh Manek on April 16, 2015, was sentenced on appeal Thursday to 24 months, eight of which were suspended, on three years’ probation. A 36-month ban on operating a vehicle was attached to the verdict.

The Court of First Instance had sentenced Kevyn Maurice Cohen (34) on February 10, 2016, to six months, three of which were suspended, on two years’ probation, as well as a nine-month ban on operating a vehicle and 120 hours of community service.
In the appeal case, the Solicitor General had demanded that the Court sentence Cohen to 36 months, 18 of which were to be suspended, on three years’ probation, and a three-year driving ban, for reckless driving.
The Prosecution also called on the Court to order the confiscation of the black Hummer H3 the suspect had been driving in the incident. This request was dismissed because the vehicle did not belong to the defendant, but to his father, who was not involved in the incident in any way. Therefore, the vehicle will be returned to its rightful owner.
The suspect was initially charged with manslaughter, but the Prosecutor only found proven the lesser count of wrongful death while driving incautiously while under the influence.
The Joint Court also did not find manslaughter proven, as the defendant did not have the intention to kill Manek, who was jogging on Airport Boulevard near Thrifty car rental at 6:53am on April 16, 2015, when he was struck by the black Hummer driven by Cohen.
Other road users stated that the Hummer’s driver had been speeding and had been overtaking two other vehicles when he hit the victim, who was jogging on the side of the road.
The Prosecutor showed video-surveillance footage as proof that Cohen indeed had overtaken two cars in the Hummer on the narrow stretch of road, while driving from the causeway bridge toward the airport. During this manoeuvre, the defendant’s car veered onto the left side of the road and hit the road’s left shoulder where Manek was jogging.
The suspect turned himself in to authorities that same day at 7:30pm. He was arrested immediately and taken into custody. He was released after spending 25 days in pre-trial detention, but had to adhere to several requirements, such as reporting to the Parole Board.
Contrary to the Prosecutor, the Appeals Court did not find sufficient evidence for reckless driving, but it was found proven that the defendant had been “very incautious.”
Contrary to the lesser Court, the Appellate Court did find it proven that the defendant had been under the influence of alcohol. Blood- and urine samples and investigations into the blood alcohol concentration (BAC) indicated a BAC level of 1,2 grams per litre, which was considered “irresponsible,” as the legal limit in the Netherlands is 0.5 grams per litre.
The defendant claimed he had been driving at a speed of approximately 60 kilometres per hour at the time of the incident. The defence had filed an expert report sustaining this claim, but the Court of Appeals found it proven that Cohen had been driving his vehicle at a speed of 92 kilometres per hour shortly after the accident and before hitting the brakes.
Nevertheless, the Court did not find reckless driving proven, but only that the driver had been driving “very incautiously.”
In sentencing it was taken into account that the suspect, who is a first offender, must carry a mental burden for the rest of his life, as his behaviour had taken a life.
The Appeals Court was under the impression that the barkeeper by profession “deeply regretted” the accident and had bettered his life. By contrast, however, he had denied his abuse of alcoholic beverages and that he had been speeding. “Insight into and repentance about his behaviour has, therefore, not become apparent,” the Court stated.