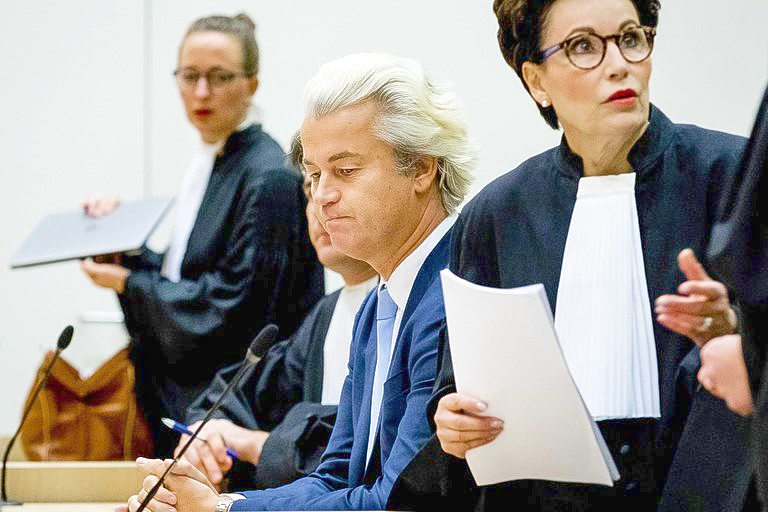 AMSTERDAM–Strong reactions have erupted after right-wing politician Geert Wilders was found guilty of inciting racial discrimination against Dutch Moroccans in a court on Friday. Wilders was condemned for his actions leading a Party for Freedom PVV rally calling for “fewer” Moroccans in March 2014 -and now has a criminal record- but he received no punishment from the three judges.

The leader of the PVV, currently leading in some polls prior to general elections in March 2017, did not attend most of the trial or verdict. But he frequently tweeted about hearings in what he called the “fake court,” conduct the judge said was “unworthy” of a politician.

Within an hour of the verdict, Wilders posted a YouTube video, saying: “The Netherlands has become a sick country. The judge who convicted me restricted the freedom of speech for millions of Dutch people.”

In a reaction, Prime Minister Mark Rutte told his weekly Friday press conference that “The Netherlands is not sick… [but – Ed.] a constitutional democracy,” according to Dutch national broadcaster NOS. He added that his conservative VVD party would not work with the PVV in a new government, unless Wilders withdraw his “fewer Moroccans” statement.

The criminal court case was based on almost 6,500 official complaints after Wilders asked a televised party rally in The Hague on March 19, 2014, if there should be “more or fewer Moroccans in the Netherlands.”

The court heard that a pre-arranged chant of “fewer, fewer” had been seeded through the crowd. “It doesn’t matter that Wilders gave another message afterwards [saying he was referring only to criminal Moroccans and benefits claimants – Ed.],” said the judge. “The message that evening from the podium, via the media, was loud and proud and did its work…The group was collectively dismissed as inferior to other Dutch people,” the court stated. The Prosecutor’s Office had called on the Court to condemn Wilders to payment of a 5,000-euro fine.

Some experts told the Volkskrant newspaper that giving a sentence without a punishment could be counterproductive. “If you think he needed to be prosecuted, and find the offences proven, you should also impose a penalty…This shows that the whole Wilders case is a parody of the criminal justice system,” Law professor Afshin Ellian said.

Law professor at Leiden University Paul Cliteur, who was called to the court as an expert witness, said: “It would have been better if the Dutch state had sent a clear signal via a Dutch court that we foster a broad notion of the freedom of expression in the Netherlands. Wilders now has a criminal record, and has all the hassle of countries that do not allow him entry.”

At the court itself, representatives of the people, whose complaints fuelled the case, were happy with the verdict, which did not award any damages, and said both sides must pay their own cost.

Wilders’ criminal record is not thought to prevent him from being a politician, but might limit his travel abroad.

One of the people, who registered a complaint, is Abdou Menebhi. “For the first time, Wilders has been condemned for racism and discrimination. Half a million people feel the threat of Wilders every day. This gives us trust in the legal process. I hope people who vote for Wilders will listen,” he said.

Lawyer for some of the complainants Michiel Pestman, said: ‘It’s a unique decision. This is the first time that a court has said that minorities need special protection, and even a politician should be very careful about what he says. There is a debate in the Netherlands about whether this has given Wilders free publicity, but he has to pay his lawyers.”

Meanwhile, attorney for the Council of Moroccan Mosques in the Netherlands Lucien Nix added that his clients would be discussing filing a civil lawsuit.

“The Netherlands can take a deep breath of relief,” he added. “Moroccan Dutch people have felt robbed of their dignity and a heightened sense of discrimination. We have waited for this for a long time.”

Wilders was officially charged with defaming a group and incitement of racial discrimination, but was found not guilty of a charge of inciting racial hatred.