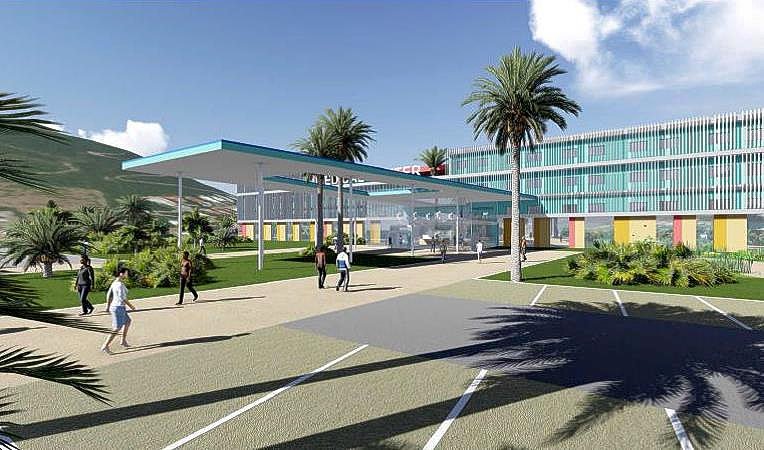 PHILIPSBURG–The Court of First Instance delivered a heavy verdict on Friday against Social & Health Insurances SZV in a lawsuit filed by Vamed, one of the companies that placed a bid for the construction and expansion of St. Maarten Medical Center (SMMC). In its ruling the Court forbids SZV to have INSO build the new hospital. Failure to comply will result in penalty payments starting at US $1 million to a maximum of $25 million.

This case concerns the public tender for construction of the new hospital that was organised by SZV on behalf of Country St. Maarten. SZV awarded the contract to the Italian company INSO to build the hospital.

Vamed, as one of the other two bidders in the public tender, opposed this decision and filed a court case against SZV. The Court in its verdict found Vamed’s arguments legally valid.

In the summary proceedings the Judge found that INSO’s bid is “abnormally low” and that SZV therefore was under the binding obligation to inform Vamed about its objections in this regard before awarding the contract to any of the bidders.

The Court also ruled that SZV, in judging the bids, had deviated substantially from the Tender Instructions it had provided to the bidders. The verdict also states that SZV was not entitled to transfer its rights to SMMC whilst it was still dealing with Vamed’s complaints against its decision not to award the contract for the new hospital to Vamed.

Vamed used the objection possibility provided to the company in the Tender Instructions after it was told that it did not get the contract. Vamed filed an objection with the court on September 18 citing its reasons why the contract process was not done fairly. SZV apparently transferred its rights to SMMC when it knew of the objections raised by Vamed.

In the appeals procedure, SZV stated that INSO and SMMC now have an agreement and cannot entertain any further discussions with Vamed.

INSO’s square-metre price is far below international benchmarks, according to Vamed. INSO offered $4,011 per square metre and the benchmarks are from $5,000 to $6,000 per square metre. Commissioned by Vamed, the US Bureau Rider Levett Bucknall focused a calculation on the situation created in St. Maarten: $6,994 per square metre.

SMMC also did a calculation in 2009 and had the cost at $4,871 per square metre, as shown in its annual report. In the objection, Vamed stated that SZV refuses to disclose its price estimate and told the company that both INSO and Vamed remained within the same price range, thus representing a variation of more than 25 per cent.

Vamed believes that the maintenance cost also is abnormally low (Vamed $102,955,560, BAM/Philips $97,704,390 and INSO $45,600,843 per year). Vamed is concerned that INSO offered an extremely low price so that it would win the bid, to achieve in the context of contract negotiations and more work ultimately a higher contract price.

Precisely for this reason, SZV included in the Tender Instructions that a candidate might be excluded if there was an “abnormal low bid.” This practice is contrary to the precautionary principle and the principle of transparency, Vamed stated to the court.

The court mentions in its verdict that SZV as contracting authority to applicants in a legal relationship should apply reasonableness and fairness and the general principles of good governance. Although the clause gives the Tender Instructions discretion vested in SZV, it is conceivable to the circumstances of the case, including the expertise of the parties and the social importance of the contract, that not using this clause would violate the general principles of good governance, the court reasoned.

The court deemed it important in this respect that SZV, neither during Vamed’s appeal nor the court case, had given a clear explanation for the large deviation from INSO’s square-metre price compared to those of the two other companies.

“From SZV as contracting party on behalf of Government, taking into account the importance to St. Maarten of a new modern equipped hospital and because the construction is carried out with public money, such an explanation should have been expected,” the court wrote in its verdict.

Because SZV has failed to explain why it was nevertheless content with INSO, the court considers that there is serious suspicion of an abnormally low tender. Under these circumstances it cannot be excluded in this case that INSO will fail to live up to its contractual obligations, the court notes.

“This means indeed a change after the fact of the bidding criteria, which is not allowed based on the principle of meticulousness that SZV is supposed to follow in regard to the bidding companies,” the court said.

It similarly took note of Vamed’s arguments that the bidding criteria were changed in INSO’s favour as it regards medical equipment. Bidding parties were supposed to supply a fixed price proposal for specific medical equipment, but SZV told Vamed during the latter’s appeal procedure that “INSO will show a range of quotations with different brands and models and discuss and negotiate best market conditions.”

Vamed told the court that if it had known this beforehand it also could have supplied a menu card with various options.