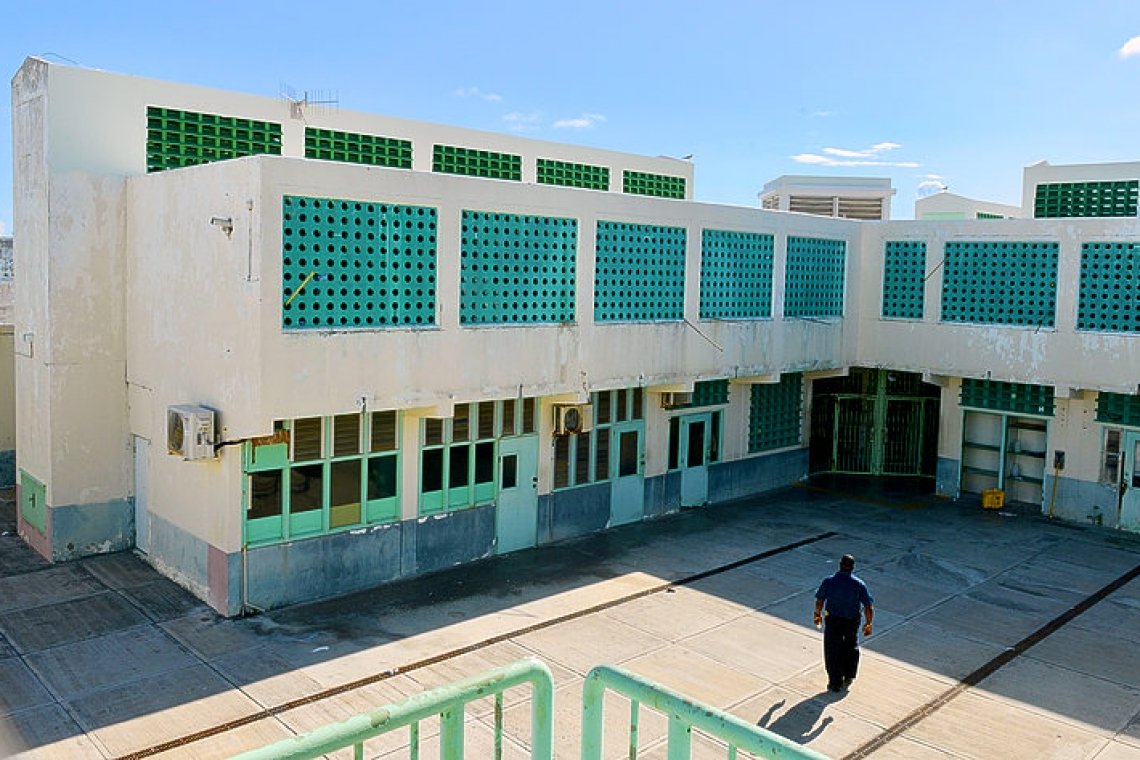 PHILIPSBURG–Before an audience – comprising the director of Pointe Blanche Prison, the Chief Prosecutor, Justice Ministry, lawyers, and courthouse officials – three attorneys presented an injunction on behalf of 37 persons who are currently detained in Pointe Blanche prison.

In Friday’s injunction, the inmates – including eight of them who witnessed the court proceedings via video conferencing – called on the court to have them transferred to safe detention facilities in the Netherlands or in Bonaire within seven days after a verdict. The court will give its decision June 19.

Some of the detainees involved in the injunction are being held in pre-trial detention, while others have been irrevocably convicted of crimes. Initially, the injunction was scheduled to be heard in March but was delayed by more than two months due to the outbreak of the coronavirus pandemic.

In the injunction, attorneys Geert Hatzmann, Shaira Bommel and Sjamira Roseburg called upon the Court of First Instance to attach daily penalties of US $1,000 per inmate in case country St. Maarten and the Justice Minister fail to comply with the verdict, with a maximum of US $10 million.

The 37 inmates argued that the prison has been plagued for years by a wave of very serious, violent crimes involving the use of knives and firearms. As a result, detainees have been threatened and attacked. One inmate lost his life in one of these violent incidents, whereas another was disabled for the rest of his life.

On February 17, 2020, the three lawyers sent a letter to the Justice Minister in which they demanded the transfer of 37 detainees to safer prisons in Bonaire or the Netherlands within five days. As the minister had failed to respond to their letter in any way, this left the inmates and their lawyers with no other choice than to address the court in seeking transfer to a safe penitentiary institution elsewhere in the Kingdom.

Hatzmann said on Friday it was “crystal clear” that the injunction was not intended to free the detainees, but to get them to a safe location and put maximum pressure on St. Maarten and the Justice Ministry “to finally put an end to the life-threatening and degrading detention situation.”

The European Committee for the Prevention of Torture or Degrading Treatment or Punishment CPT and the St. Maarten Law Enforcement Council have both published highly critical, and according to the lawyers, even “destructive” reports abouts prison safety.

In various reports both organisations urged the government of St. Maarten and the Justice Ministry to bring the liveability and safety at the house of detention to an acceptable level, but according to the litigating detainees, the government has categorically disregarded the numerous advices of the CPT and the law enforcement council.

Represented by attorney-at-law Aernout Kraaijeveld, country St. Maarten and the Justice Ministry pleaded with the judge to declare the inmates inadmissible in their case against government, and to turn down the request for payment of monetary penalties in case of non-compliance.

Government’s lawyer said it was “not to understand” why the Dutch government was not included in the injunction, because the detainees would still remain empty-handed in case they would win the injunction, but the Netherlands would decline to cooperate with a transfer of detainees to Dutch territory.

However, according to the inmates’ lawyers, St. Maarten has the obligation to run a good and safe prison because it has a duty of care towards its prisoners. Therefore, it is up to St. Maarten to build and equip a modern, secure prison and, in the meantime, house the existing prison population in safe houses of detention elsewhere in the Kingdom, as there is no other available location in the island.

St. Maarten must enforce cooperation with the Netherlands, said Hatzmann. “It is a Kingdom affair. The injunction has been delayed for quite some time due to the COVID-19 pandemic and government had several months to sit at the table with the Netherlands and Bonaire. It is not without reason that there is a Mutual Regulation (“Onderlinge Regeling”) [for the detention capacity in the Dutch Kingdom – Ed.].

“In addition, it appears that the Netherlands is willing to sit around the table, but you have to take that step. It is up to the Minister of Justice to request the Netherlands – on the basis of the Mutual Regulation – to temporarily take in St. Maarten prisoners. The detainees cannot do this themselves.”

At this moment, there are 17 St. Maarten detainees in prisons in the Netherlands as their safety could no longer be guaranteed here after the Hurricanes Irma and Maria in 2017.

According to the St. Maarten government, human rights are not being violated in Pointe Blanche prison, which is outdated, over-populated and which was severely damaged by the 2017 hurricanes.

Kraaijeveld agreed that the situation in the prison was not ideal, but not more dangerous than in other prisons. “Compared with the prison in Guadeloupe, Pointe Blanche is a hotel,” he added.

The lawyer also pointed out that the inmates themselves, including some of the litigants, are to be blamed for the violent incidents and vandalism that take place in the prison.

Kraaijeveld stated that Pointe Blanche prison is “constantly” being renovated, that an improvement plan has been drafted, and that “considerable” sums have been allocated for the prison.

Also, several steps have been made to improve the situation in prison with more staff, daytime activities, a rehabilitation programme and electronic surveillance.

July 3, 2020
0
Richard Panneflek. PHILIPSBURG--The Minister of Public Health, Social Development and Labour VSA Richard Panneflek has announced that as of Wednesday, July 1 the total number of COVID-19 cases on St. Maarten is now 78.    According to a press release on...
Read more
Local News