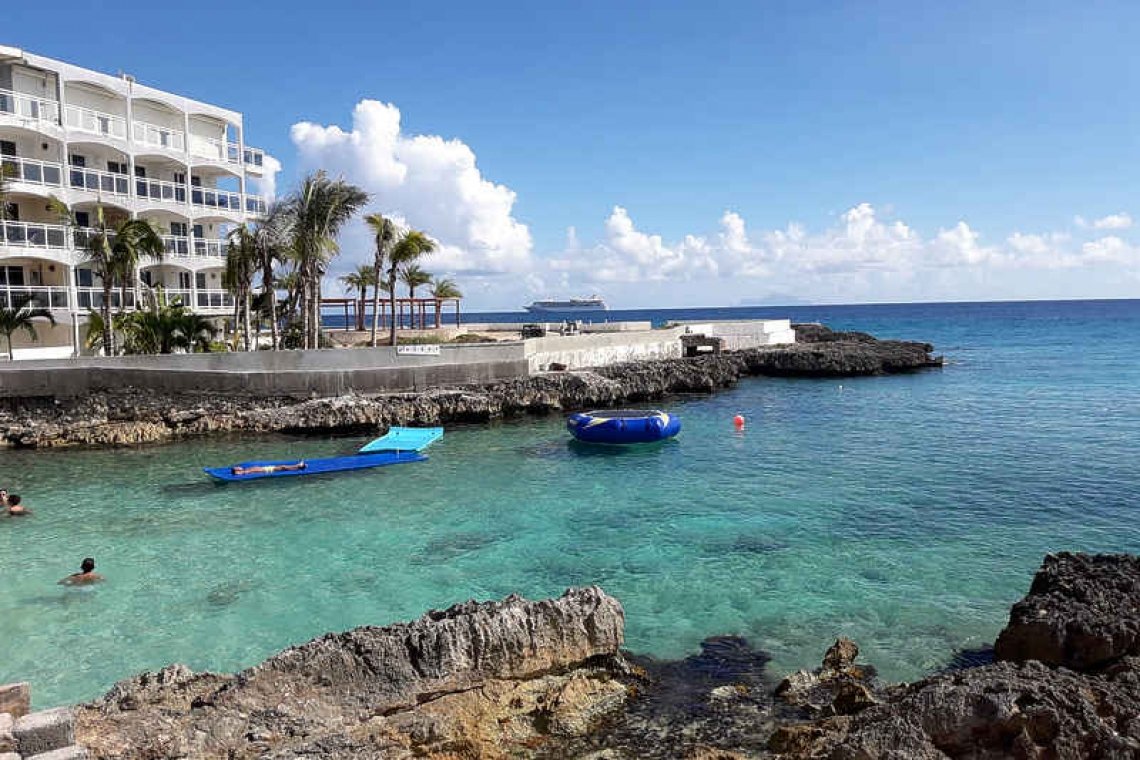 Alegria Boutique Hotel in Beacon Hill is planning to construct a breakwater and a sea aquarium at Burgeaux Bay. (John Halley photo)

BEACON HILL–Country St. Maarten must issue an area of approximately 13,525 square metres of water rights in long lease to Alegria Real Estate NV, no later than 48 hours after receipt of the verdict, the judge in the Court of First Instance decided Friday in an injunction filed by the boutique hotel in Beacon Hill.

In case of non-compliance, country St. Maarten or the Ministry of Public Housing, Spatial Planning, Environment and Infrastructure VROMI will have to pay daily penalties of NAf. 10,000, up to a maximum of NAf. 1 million. Government will also have to pay the cost of these procedures, estimated at NAf. 2,690.50.

Alegria Boutique Hotel filed an injunction on August 12, 2020, with regard to this issue which dates back more than two years. On May 31, 2018, the then-VROMI minister Miklos Gitterson informed Alegria that he had received a request for the issuance of long-lease rights for an area of approximately 13,525 square metres of water for the development of the hotel in providing “additional service” to tourists and “resident clients.”  In the letter, the minister stated that the Department of Domain Affairs was in the process of drafting an advice and the resort was informed that the minister “in principle” had no objection to the issuance of long lease, adding that “the only construction to be allowed in the area in question is a breakwater and a sea aquarium.”

In an email message of March 6, 2020, then-VROMI Minister Chris Wever informed the ministry’s secretary-general Louis D. Brown that he had no issues with the breakwater and the pier “once they [Alegria – Ed.] can ensure no corals are damaged.”

Alegria believed that government was stalling and filed for an injunction which led to a settlement agreement in early May, in which it was agreed that the hotel would receive an area of 13,525 square metres at Burgeaux Bay. After an exchange of several email messages, Alegria withdrew the injunction, but current VROMI Minister Egbert J. Doran was of the opinion that government lawyer Aernout Kraaijeveld, who led the negotiations between government and the hotel, was not authorised to commit government to the closed agreement.

Alegria, represented in these proceedings by attorneys Eric de Vries, Charles Rutte and Carry-Lynn Martinus, stated without being contradicted that it had made “expensive” investments and that it has been negotiating with various VROMI ministers for two years about the issue of long-lease water lots.

“Alegria could have justified confidence that the country had granted a power of attorney to Mr. Kraaijeveld to accept the offer as stated in the email of 4 May 2020 from the representative of Alegria.” Therefore, government is bound by the settlement agreement, the judge stated in the verdict.

In the provisional opinion of the Court of First Instance, sufficient attention to the protection of the environment was paid in the draft decision to issue long-lease water rights.

However, the long-lease does not affect the fact that for the structures to be constructed in the water area, permits will have to be granted in the context of which environmental protection must be taken into account, the judge stated in the verdict.

In connection with the payment of penalties, the court stated that a penalty payment is an incentive to comply with a conviction in a timely manner. He said it is a “well-known fact” that the imposition of a coercive sum is necessary to ensure that government complies with court judgments. “The imposition of a penalty is, therefore, neither unjustified nor irresponsible,” the magistrate stated.