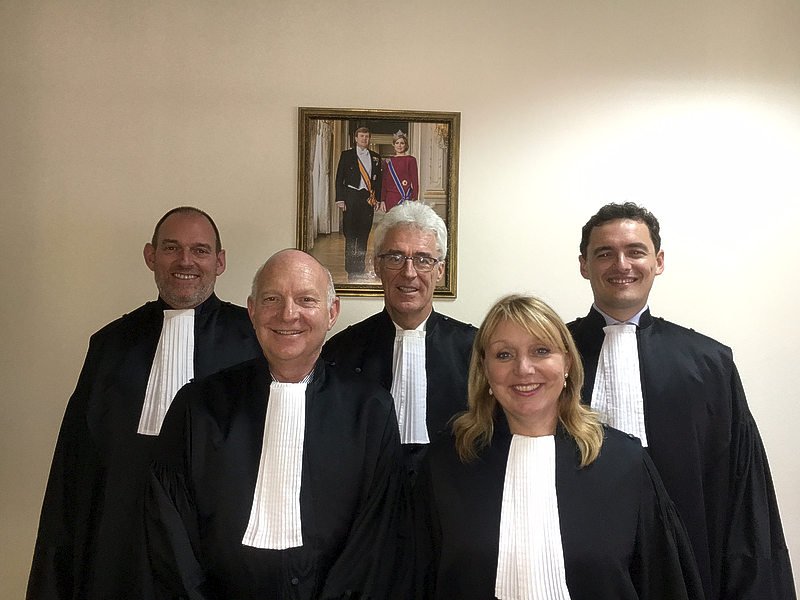 PHILIPSBURG–Three new judges were officially installed during an extraordinary sitting of the Joint Court of Justice at the Courthouse on Friday. An audience consisting of Acting Governor Reynold Groeneveldt, Minister of Finance and Acting Minister of Justice Richard Gibson, officials of the Court, the Prosecutor’s Office, the Police and lawyers welcomed the reinforcement of the Court, which is being confronted with an increased influx in criminal cases.

As more efforts are made in police investigations and the prosecution of suspects, with an extra focus on organised and undermining crimes, the Court also required a reinforcement.

Investigating Judge John Schols (52) is an expert in cyber-crime and will be involved with large-scale investigations in organized and undermining crimes, such as corruption and money-laundering cases.

He started his career as a judge in 2007 and was an Investigating Judge in Rotterdam prior to travelling to St. Maarten in May. He is considered a real “Flying Dutchman,” who loves to travel the world over.

Dirk Gruijters (41) is the Benjamin among the three new judges. He became a lawyer, after brief stints in the business world and with Interpol. He started his career as a judge at the Noord-Nederland Court, where he handled criminal cases. Since September 1, he is St. Maarten’s resident judge in criminal cases.

Since 2008 he was a magistrate at the Court in The Hague, where he handled criminal cases, including border-crossing crimes.

As is customary during the installation of new judges, several officials addressed issues of a more general judicial nature in their speeches. Joint Court President Evert Jan van der Poel, who led the ceremony, spoke about “Equal and accessible Justice under Law.”

In his capacity of Acting Solicitor General, Chief Prosecutor Ton Maan lauded the arrival of three criminal judges, as up until recently only one investigating judge and one criminal judge were confronted with a daily influx of cases presented by four to five prosecutors.

“Seven days, five firearms, one knife, three violent deaths and one fatality in traffic,” Maan summarised in pointing out that crime had become harder. “Extreme violence is no longer an exception. The possession and use of firearms is alarming, heavy and undermining crimes are increasing; the threats are big,” the Chief Prosecutor said.

He said that maintenance of the law in St. Maarten has not developed sufficiently to give an adequate response to these threats. “Even more, it is falling short in many areas. I point at finances, the means and formation made available to the police, the Prosecutor’s Office, the Joint Court of Justice, the prison, and don’t forget the legal profession…All these main players in law enforcement are being insufficiently equipped to do the hard work they’re supposed to do.”

Nevertheless, new steps are made in law enforcement, the Chief Prosecutor said, such as the implementation of an Asset Recovery Team, which was approved by the Ministers of Justice and Finance.

A team consisting of police officials, Coast Guard, the Tax Department, Royal Dutch Marechaussee and the Receiver’s Office will be focussing on an integral approach of seizing the financial gains of criminal under the motto “Crime does not pay.”

Another focal point as stated in the Prosecutor’s Office’s “Perspective on crime fighting 2016-2021 is common crimes, which are to be dealt with in the Justice as Soon as Possible (JASAP) project, in cooperation with the police. Maan also mentioned high-impact crimes, and local and border-crossing undermining crimes.

Dean of the St. Maarten Bar Association Aernout Kraaijeveld applauded the arrival of three new judges and the initiatives “to go after the big fishes,” but also warned for the consequences of investing 22 million euros in law enforcement.

“As a result there will be an extra influx of suspects at the police station and the court, but also at the house of detention, which absolutely does not meet the requirements.”

Prison guards have gone on strike and pro bono lawyers have also laid down their work, Kraaijeveld said, in stating that no extra money has been made available for legal assistance. He called for attention to the problems faced by law offices which are primarily handling pro-bono cases.