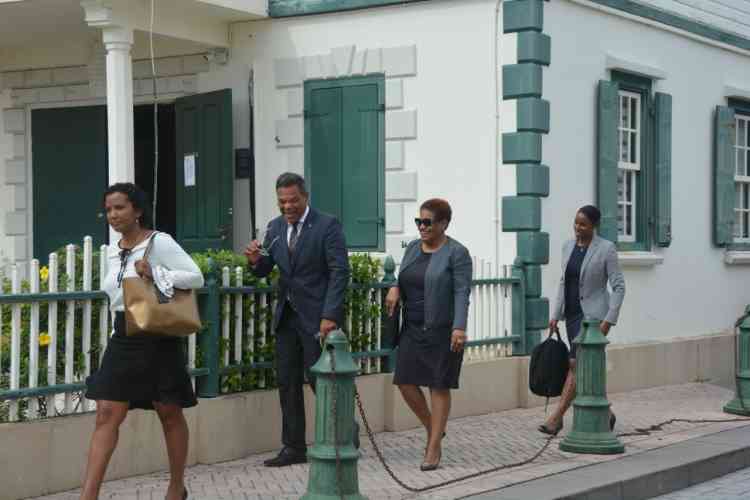 All three suspects read written statements to the judge. Main suspect Regina Labega (59), who is facing a NAf. 500,000 fine and a five-year ban from the civil service, said she hoped her good name and reputation would be restored when the Court gives its decision on November 28.

She said the past eight years have been “nothing short of a nightmare” and an “ordeal” for her and her family. The current policy advisor to Minister of Tourism, Economic Affairs, Transport and Telecommunications (TEATT) Stuart Johnson said she has been in government employment since 1999 and had been head of the Tourist Bureau since 1999.

She said she had strived to make St. Maarten the tourism destination it deserves to be. She said she had worked in close cooperation with government and had “never done anything without the approval of my superiors. I had a layer of superiors above me and never had my integrity doubted,” she stated.

According to the Prosecutor’s Office, the integrity of St. Maarten’s civil service is at stake in this case, as government money from the Chase Bank New York account to cover the cost of STB’s New York office to promote St. Maarten tourism in the North American market was used for other purposes and without permission by the then-Executive Council.

For the promotion of St. Maarten in North America the total amount of US $2,448,800 was deposited in the Chase bank account between 2008 and 2010. Labega and her co-defendants Fabian Badejo (68) and E.A.I.F. (38) are suspected of founding ECD with the intention to obtain an illegal source of income from the account.

In the Prosecutor’s Office’s opinion, the three formed a criminal organisation aimed at embezzlement, money-laundering, forgery and tax crimes. Labega’s partner Badejo and her friend F. were co-directors of ECD. Labega was the alleged owner of the company, which went dormant in August 2010.

“I came to St. Maarten 40 years ago and made it my home. I never committed a crime against my home. I contributed to the social and cultural life on the island,” Badejo, who is a pensioner now, told the Court. The former journalist added that his integrity was never questioned during his career at three local newspapers.

“It does not pay to start your own business,” he said. He said the case against him, in which the Prosecutor called for a NAf. 140,000 fine, was based on “falsehood and innuendos” in which “the truth ends in a hole. I’m not a criminal or a thief, I never defrauded anything, and I am no member in a criminal organisation,” he stated.

F., who is also facing a NAf. 140,000 fine, said she was a hardworking mother of a three-month-old son who obtained a Master’s degree in Marketing and subsequently became a marketing manager at the New York office. She said she could not be held accountable for tax crimes, as she had hired a firm to do the work for her.

The defendant’s lawyers pleaded for their clients’ acquittals. Attorney-at-law Shaira Bommel said the Prosecutor’s demands against Labega, F. and ECD were “ridiculous and scandalous” and did not consider the fact that the alleged crimes were committed eight to 10 years ago.

She also pointed to the mild conviction of STB Department Head Edward Dest, who was given a symbolic sentence of one day in prison in 2015.

The Prosecutor said that in retrospect the cases against these three suspects shed a totally different light on the very “light” sentence in the Dest case.

Bommel claimed that the money in the Chase bank account was not solely destined for the US market, but the Prosecutor provided statements by former Commissioner of Tourism Frans Richardson and Finance Commissioner Hiro Shigemoto, former Lt. Governor Franklyn Richards, controller Alex Richardson and Dest who said money in the New York bank account was only destined for the US market and not for expenses incurred in St. Maarten.

Bommel said the entire Executive Council had been aware of this, not just Labega. The Prosecutor said it was true that money was spent on business trips and travel expenses “high and low in the governmental organisation, but this does not mean that Labega will escape her responsibility.”

The defence refuted statements that the job letter for Labega was false, as she had obtained a job as accounts manager Eastern Caribbean Division R Pelham Inc. in Anguilla in February 25, 2008.

According to the Prosecution, Pelham and ECD were both established to hide Labega’s “side-jobs” from Government, as civil servants in St. Maarten are not entitled to have other paid jobs.

Labega allegedly hired ECD services for the promotion of tourism in St. Maarten. “ECD sent invoices to Chase with no questions asked,” the Prosecutor stated.

He branded the collaboration between the three suspects a “conspiracy” to trick St. Maarten out of money. “Receipts are missing” and the invoices were branded “bad” and “inflated.”

The defence lawyers refuted these statements and pointed out that ECD’s statutes clearly stated that the company was solely involved with the promotion of St. Maarten tourism and not aimed at committing crimes.

The Prosecutor also was not very impressed with the statement that Labega would have correctly paid taxes on behalf of her consultancy firm in the United States and that the accountants of “high repute” hired by suspects were making efforts to “clear their street.”

The Prosecutor called for a NAf. 100,000 fine against ECD, but according to the defence, companies cannot be handed fines for alleged crimes.

Bommel and her colleague Safira Ibrahim also claimed that Badejo and F. could not be found guilty of co-perpetration of embezzlement as civil servants. “That’s a nice try,” said Bommel in pointing out that the two were not civil servants when these crimes allegedly were committed. Both lawyers were also surprised that no audit reports were presented to the Court as evidence.