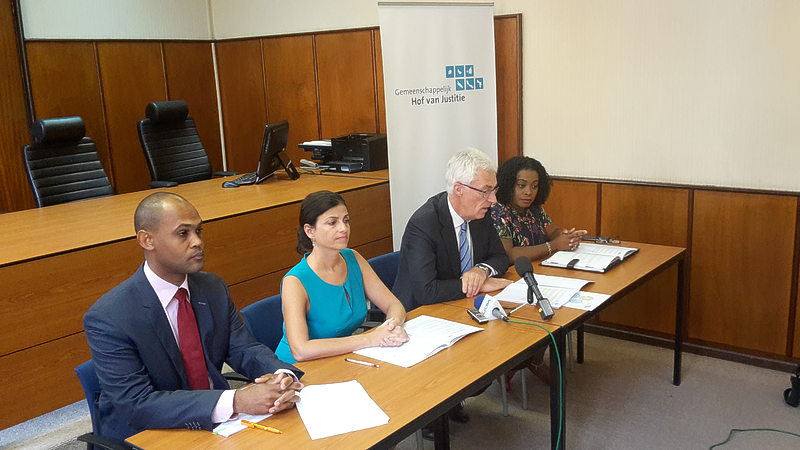 PHILIPSBURG–The Joint Court of Justice of Aruba, Curaçao, St. Maarten and of Bonaire, St. Eustatius and Saba presented its Annual Report 2015 to the media on Wednesday. The influx of cases last year has increased to 36,188 in 2015 from 34,953 in 2014, but finances remain a reason for concern, the Court stated in its report.

The increase is largely due to more criminal cases, in particular in the category of misdemeanours. The influx of these cases went up at nearly all Court locations, from 16, 433 in 2014 to18,667 last year.
“We can conclude there are fluctuations in the numbers of influx of cases in the different categories and between the locations. There are no special causes and changes are also difficult to predict. Exchange of information with the judicial partners is required, so that the capacity of the Court can be better planned,” the report said.
The Joint Court’s annual report was presented in Curaçao by President of the Court Evert Jan van der Poel, Vice-President of the Court in Curaçao and Bonaire Eunice Saleh and Interim Director of Operations Nadine Calister-Presentacion.
Larger and more laborious cases, including, in particular, criminal cases, required more time and capacity from the Court last year. These caused some backlog and an increased workload in some jurisdictions.
The Court closed off 2015 with a positive financial result, mainly due to lower cost for staff at all locations. These costs were lower because not all vacancies could be filled and due to lower pension costs, as a result of changes in the pension regulation by the General Pension Fund Curaçao APC.
Nevertheless, the financial basis of the Court remains a cause of concern as the countries do not meet their financial obligations to the Court on time, it was stated. “The Court is working cost-consciously and is working on improving efficiency and service,” according to the report.
The report’s theme of “Acceleration” is graphically reflected by transmission wheels to give expression to “processes of development that intervene on and with each other and which together shape the renewal of the Court.”
The Joint Court has locations in four countries, all with their own dynamics and complexity. “Diversity in unity is perhaps the best way to describe it,” Van der Poel writes in the introduction of the report.
The Court is tasked with guaranteeing unity in jurisdiction in all countries of the Dutch Caribbean as well as possible, despite increasing differences in legislation and regulations, in which legal certainty, predictability and high quality of legal decisions are deemed very important.
This is reflected in projects and developments in the Court’s various jurisdictions, especially in administrative and tax jurisdiction.
Since last year, the Court is developing the so-called GEAR programme, which will be used to register cases in an integral and uniform manner. Since the Joint Court’s establishment as an independent entity in 2010 it has been the intention to turn four different registration systems into one integrated, automated system for the registration of petitions, notices of objection, appeals and criminal cases and the monitoring of the progress of cases. Introduction of the new system is considered a good basis for further modernization and digitalization of jurisdiction.
The cooperation between the Joint Court and the Council of State in The Hague will be continued to safeguard that administrative jurisdiction in so-called LAR-cases will be rendered at the highest level. Furthermore, the Court will keep looking for qualitatively good local legal support, it was stated.
New tax appeal jurisdiction was introduced last year on Aruba and on Bonaire, St. Eustatius and Saba. Curaçao and St. Maarten are to follow this year. This new type of jurisdiction comes with new procedures and centralization. Part of the work was centralized in Curaçao and has now been transferred to Aruba.
The offices in the other countries will continue to provide front-office services and tax cases will be heard in the courts of all countries.
A permanent tax judge started working at the Court of First Instance on August 1, 2015. From that moment, more sessions were held and the handling of tax cases increased considerably, the Court said. “The quality of tax jurisdiction is guaranteed through cooperation with judges specialized in tax jurisdiction from Dutch courts,” the report said.
The Court still considers the assistance of judges from The Netherlands desirable, “but there needs to be a good balance with the number of local judges.” Therefore, the Court is recruiting and training local jurists, also for legal support.