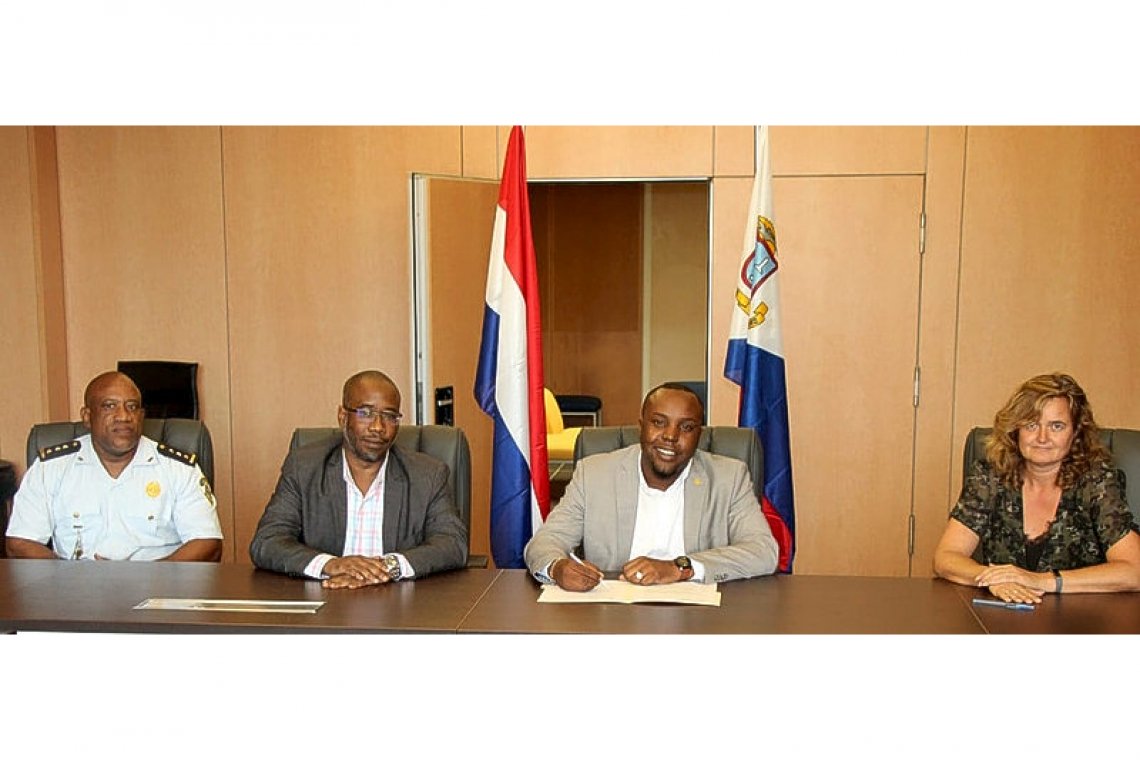 PHILIPSBURG–The covenant between the Justice Ministry, the Prosecutor’s Office, the St. Maarten Police Force KPSM and Foundation Judicial Institute St. Maarten SJIB to facilitate electronic surveillance in the justice system was finally signed by all parties on Tuesday.

Justice Minister Egbert Doran said at the Council of Ministers press briefing last week that SJIB was delaying the implementation of the project because it had not signed an earlier agreement, instead requesting a larger budget allotment and the commitment of government to comply with some “conditions.”

SJIB backed out of signing this agreement on December 20, 2019. According to Doran, SJIB told him at the time that its board wanted to discuss the matter before signing.

Doran said last week that he had a call with SJIB on Tuesday, February 18, which was followed by the foundation sending him a budget proposal on Wednesday morning, February 19.

“To my surprise … I received a full budget of a substantial amount. This also includes hiring of staff to carry out these tasks. … When they talk about hiring staff, I don’t know where this idea came from, but again you show the resistance of not wanting to go ahead,” he said.

According to Doran, SJIB gave several “conditions” for its role in the electronic surveillance project. These were outlined in a letter accompanying the budget, he said.

These issues have apparently been settled, as evidenced by SJIB signing the agreement yesterday.

“We sat down and discussed several points and at the end we came to a consensus,” said Doran when asked by The Daily Herald on Tuesday evening about how SJIB’s request for additional funding and its accompanying conditions had been resolved. He declined to go into the specifics of the compromise.

The electronic surveillance project is a “form of digital incarceration” where “ankle bracelets will be used in order to monitor the movements of detainees who are temporarily released,” said the Justice Ministry in a press release on Tuesday.

The aim of this project is to relieve space issues at the Pointe Blanche prison, which is currently at maximum capacity.

Electronic monitoring will be used on selected inmates to suspend their pre-trial detention. It is also to be used as an option to allow for conditional sentences ordered by a judge or conditional release from prison.

“The Prosecutor’s Office is the entity that will allow or request the use of electronic monitoring in the case of suspension of pre-trial detention or for monitoring in a conditional sentence, in accordance with their legal authority and whenever deemed necessary and applicable.

“The police (KPSM) will be responsible for the 24/7 monitoring of participants and will also be involved in any restorative action that may need to take place on request of the … SJIB, in charge of rehabilitation services in St. Maarten.

“SJIB is responsible for the guidance and overall supervision of participants in the electronic monitoring programme,” said the Justice Ministry.

Doran said he sees this project as “a great accomplishment for the Justice Ministry” and “looks forward to all stakeholders working together in order to guarantee the success of the programme.”