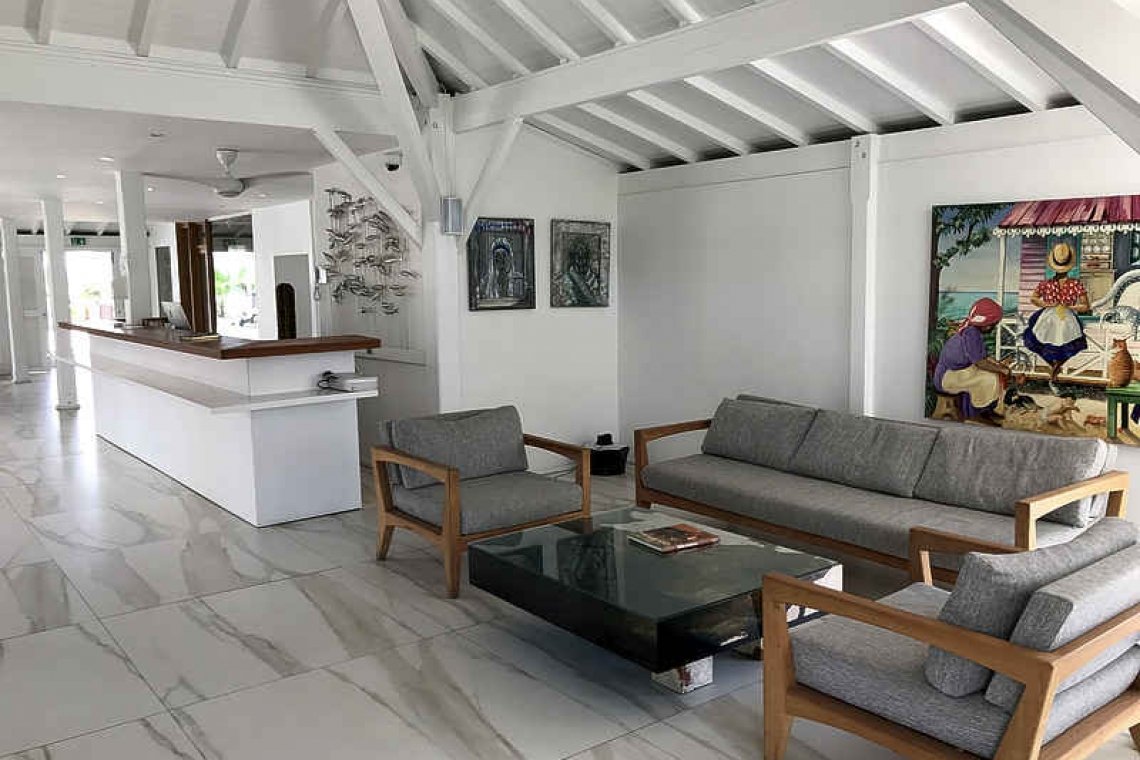 MARIGOT–One might think French-side hotels have acquired some immunity after weathering one crisis after another since Hurricane Irma, but COVID-19 is a different, unprecedented, beast.

While hotels are adapting to the new reality the industry is in survival mode, deprived of the normal influx of tourists, and now exacerbated by the ban on US tourists entering the French side and the controversial border controls. That leaves the French and European market, the regional tourist market, and the Collectivité-funded “Staycation” scheme that is helping keep hotels afloat during the slow summer months. The latter programme expires at the end of August.  Hotels are receiving financial assistance from government once they meet certain conditions and schemes like “chômage partiel” where the State pays 80 per cent of the employee salary and the employer 20 per cent, is a valuable help, although since June employers have to justify why they need this aid to be extended.

How the rest of the low season pans out depends crucially on decisions made by the Préfecture. The ban on US tourists entering the French side was implemented as of August 1 and the subsequent border controls to control spread of the virus are in place until September 1, pending another review.But with active COVID-19 cases continuing to climb on both sides of the island, the possibility that cross-border travel will remain restricted is not good news for a hotel like the 24-room L’Esplanade in Grand Case. L’Esplanade and Grand Case Beach Club are properties that depend heavily on the US market. L’Esplanade has been closed since mid-March. Grand Case Beach Club is one of several hotels participating in the Staycation programme.“With the international airport closed to the Americans we decided more or less not to re-open this summer,” said L’Esplanade’s general manager Alexandra Chirlias.

“Our annual closure is from the middle of August to late September. This one and our sister property Le Petit Hotel would normally be opening again in October, but because of the border situation we may just open the 10-room Le Petit Hotel only. Of course, we want to open in October but it depends if the border will re-open. It’s a tricky situation.”Pre-COVID, L’Esplanade’s occupancy in February was 95 per cent with 99.9 per cent American and Canadian clientele, many of whom are repeat guests.Another concern for hoteliers is the possibility of greatly restricted travel between St. Martin, Guadeloupe and Martinique since the Préfète disclosed Guadeloupe and Martinique were threatening to close their borders to the island if the increasing number of COVID-19 cases on both sides of the island is not reduced considerably. But there has been no news on this point.

For the small L’Hévea Hotel on the Boulevard in Grand Case this is a big concern.“Our main market is Guadeloupe and Martinique, so if they close it will kill us, and other hotels,” said hotel owner Anne who, with her husband, has been running the hotel for eight years. “We only have nine rooms so it is normally quite easy to fill. But July was bad with 20 per cent occupancy. Then August was much better, back up to 80 per cent occupancy. Overall, we are only making 20 per cent of the revenue we should be earning.”

In Orient Bay, the four-star Plantation Hotel had 35 per cent occupancy in July and up to 50 per cent at weekends thanks to local Staycation guests. According to Plantation’s general manager, August is running about the same, but the hotel has seen a drop in revenue of 50 per cent.The hotel’s clientele has been predominantly tourists from Martinique, Guadeloupe, St. Barths and mainland France. The hotel has reduced some of its services, but guests are informed.The 53-room Plantation also works well with business travellers from Guadeloupe and Martinique, often receiving referrals from the Hope Estate industrial zone. The hotel says it does not have long term visibility.Requests for reservations for the season (January and February) are not materialising now as they normally do, suggesting there will be a flurry of last-minute reservations as guests wait to see how the island situation is evolving. Plantation will close for its annual closure from September 1 until October 15.

La Playa and Esmeralda Resorts are closed until October, with La Playa building a new restaurant. But four-star Palm Court Hotel is the only hotel open now in the Orient Bay village area. It had been closed since March 21 and re-opened on July 30.“With the other hotels closed we had some demand from Guadeloupe and Martinique and some repeat guests who wanted to organise a wedding and needed rooms for their guests,” said Palm Court’s general manager Anne Jacques. “In the week that we opened we had 16 of our 21 rooms occupied and in August our occupancy has been around 35 to 50 per cent.“For September our forecast is about 25 per cent occupancy. Most of our guests are from Martinique and Guadeloupe and some from France. And we have also done quite well with Staycation guests.The restaurants in the village are open, catering mostly to locals. Our guests get free chairs and umbrellas at Bikini Beach and Wai Plage.”Palm Court will have its annual closure in October.

Hommage Hotel (formerly Mercure Hotel) in Baie Nettle has been operating at 13 to 14 per cent occupancy and some employees have been laid off. Its clientele is mixed; French, European and Antillean (Martinique and Guadeloupe).Rooms Division Manager Farid said the border situation has put off some guests from Guadeloupe and Martinique who like to shop on the Dutch side. He said the Staycation programme has been a help, but he described the concept as more “camping” rather than a hotel-stay.

Asked about the upcoming season, he replied: “We have a bit of hope for December, but it will be impossible to have a season like before. It depends on what happens in France with COVID cases and if there are travel restrictions. I think we will be operating at 30 per cent. But it all depends how this coronavirus situation evolves.”

Elsewhere, Belmond La Samanna announced it will re-open on November 2, having been closed since March 19 without interruption.“Our plan is to reopen on November 2, but it looks seriously compromised by global events and travel restrictions and may lead us to re-open early December instead,” confided General Manager Eléonore Astier-Petin.The other big player, Secrets Anse Marcel, plans to open on October 16. No immediate comments could be obtained from Secrets, Grand Case Beach Club, and Centr’hotel, Marigot.