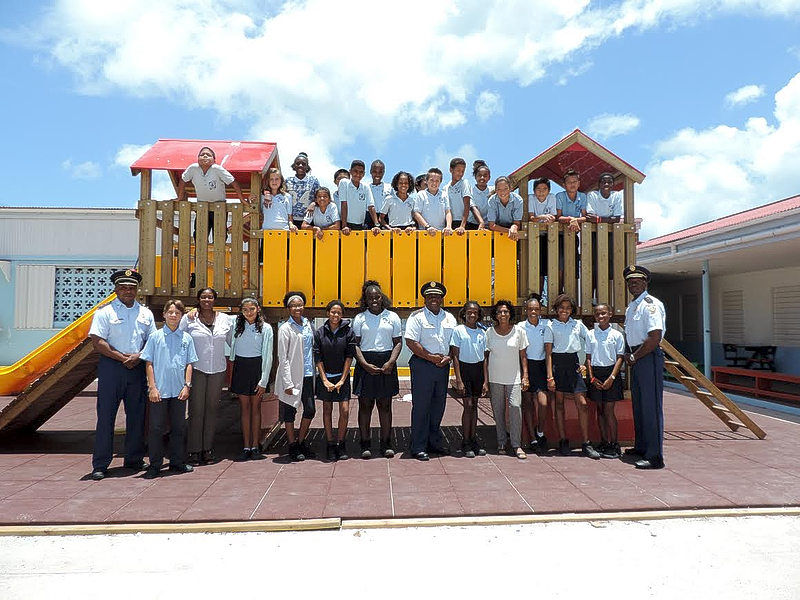 COLE BAY–In an effort to bridge the gap between police and students, under the lead of the Community Police Officers, a programme was implemented to minimise misconceptions while cultivating friendships between law enforcement and students.

Cops & Kids programme offers the CPOs a platform to invest in the students of their respective districts. Key is showing their students a balance between the disciplinary end of the law and the lighter side of law enforcement. “To serve and protect” is a critical component of the mantra of the Police Force that is extended to all citizens. The presence of the police in the school as a part of the school community indirectly lends to modifying undesirable behaviour and opens up valuable lines of communication.
They emphasise to students that their concerns are taken seriously and that their well-being, like that of every other community member, is of utmost importance. Out of this vision, the Cops & Kids programme was created according to a press release from the public relations office of the police.
Cops & Kids, a multi-phased programme, was hosted by the CPOs, D. Chandler, S. Crispulo, S. Carty and E. Josepha in collaboration with Priscilla S. Bell of the Inspectorate of Education for the Grade 6 students of their schools. They include Seventh Day Adventist School, The Leonald Connor School and the Sister Regina Primary School. Because of the down time for Grade 6 students after their FBE Exit Exams, the CPOs used Cops & Kids to supplement the post-exam programmes provided by the schools by executing the following activities:
“One on one:” students submitted questions to the CPOs regarding the tasks of the Police Department which were addressed in a presentation at the different schools. Two former students of the school were also present to give the students insight on their experiences with the transition from elementary school to secondary school.
“Open House:” students were afforded the opportunity to visit different departments within the Police Department, specifically:
*Detective Department – students received an overview of the process of filing a complaint through to the court case. They participated in solving a mock crime.
*Juvenile and Vice Department – students received an explanation on the process of the department and how sensitive cases involving children are handled which includes what happens to children who commit crimes and when crimes are committed against children
*Forensic Department – students received an explanation what they do from arriving at the crime scene and the processing of evidence (fingerprints, DNA, photographing); they also staged a crime scene and students had the opportunity to gather evidence.
*Central Dispatch – students received an explanation on what they do, identified how the unit is comprised (police and ambulance dispatch), explained how calls are received and dispatched to patrol units.
*The Uniformed Division – students received an explanation by the Team Leader about his daily tasks and responsibilities (fines, taking calls, making up reports, and rendering assistance to those in need) and those of the patrol.
*The dog handler – students received an explanation from one of the dog handlers on what the tasks and responsibilities are and what the dog and his handler’s physical and legal parameters are. They were informed that the dogs are full-fledged police officers.
“Sports Day:” two of the three schools showed their school spirit as they faced off for “bragging rights” on whose school was the most athletic.
“The Great Debate:” held at Caribbean Cinemas. In teams of five, the schools debated “for” and “against” on the selected topics. These included social media, discrimination in schools, the use of cell phones in schools and disciplinary measures against children.
The release stated, “When we consider the types of citizens we are grooming and growing, we know that it is going to take the entire village to lend a hand. We can be deterred by the cost now or we can devastate by the cost later, one thing is certain, there will be a cost. As law enforcement in the school, our role is different; we understand that children cannot be forced into right conduct; we don’t speak down to them and we discourage them from discounting or belittling themselves and others.
“We treat them with the same courtesy and respect that we extend to every citizen and resident. We are guardians at the gates of the schools charged with the protection and preservation of our country’s most valuable resources. If we want to circumvent the types of behaviour challenges that are present and evident in the secondary schools, we must initiate long before secondary school. Cops & Kids will be in effect for the start of the 2016-2017 schoolyear,” the statement concluded.