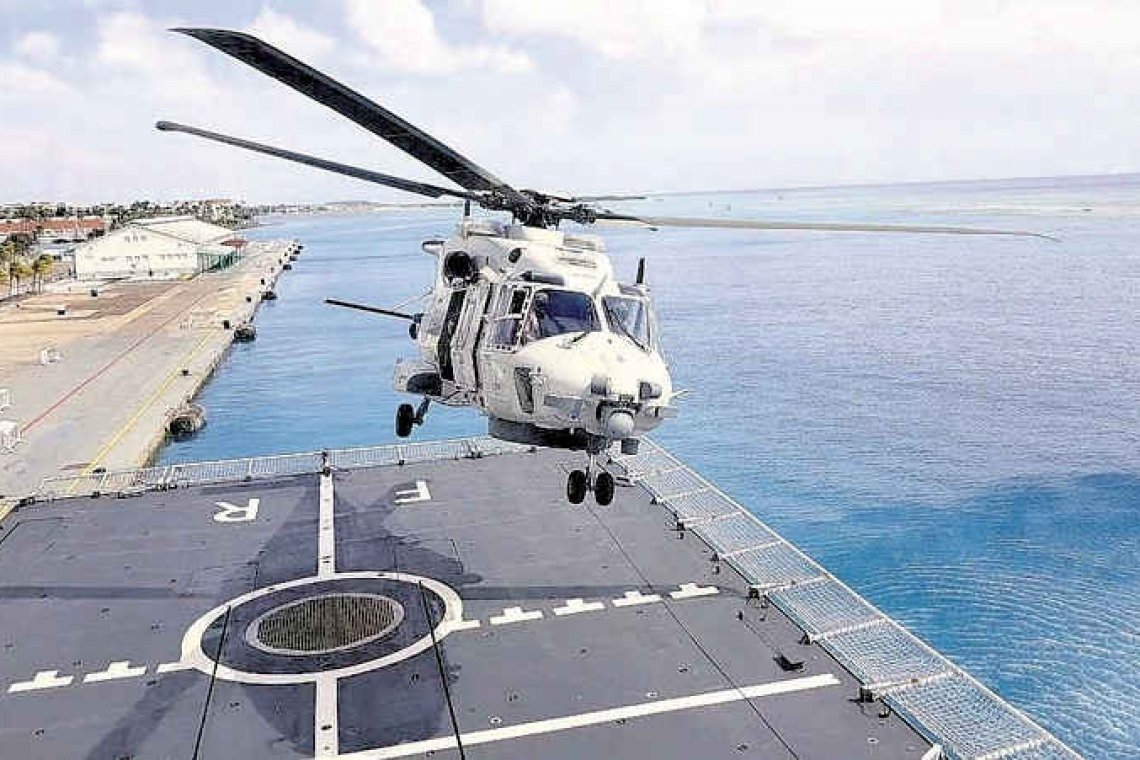 An NH-90 helicopter taking off from a Royal Netherlands Navy ship. (File photo by Defence)

ORANJESTAD/THE HAGUE–The Dutch Defence helicopter that crashed near Aruba on Sunday afternoon was on its way back to Curaçao from a border patrol flight above the sea.A Defence spokesperson confirmed this on Monday. Two of the four-member crew died in the crash of the NH-90 helicopter, pilot Christine Martens (34) and tactics coordinator Erwin Warnies (33).

Both were lieutenants second class of the oldest category.The maritime borders of Aruba are closed due to the coronavirus pandemic, with the exception of regular maritime traffic such as freight vessels, local fishing boats and the occasional cruise ship for repatriation and provisioning purposes. The Dutch Navy assists the Aruba Coast Guard organisation Warda Nos Costa with border patrol, also to stop undocumented Venezuelan immigrants from reaching Aruba.The pilot was steering the maritime fighter helicopter from a patrol flight back to its station ship, HMNLS Groningen positioned near Curaçao, when it crashed in sight of the patrol ship and about 12.5 kilometres from Aruba’s coast.

Martens and Warnier, seated next to the pilot, did not survive the crash. Two other crew members, a sensor operator who works with the radar and sonar system, and a professional diver who assists with rescue missions at sea, only sustained light injuries and were saved. HMNLS Groningen crew members who got the helicopter crew back to the ship tried to reanimate Martens and Warnies, but to no avail.

The cause of the crash is unknown. A diving team has managed to retrieve the black box, the flight recorder, which might shed some light on the crash. This was no easy task with the hard wind, high waves and strong current. The largest training company of civilian helicopter pilots, Heli Holland, stated on Monday that there are two main causes of crashes: technical failure or human error.There were reports that the helicopter may have sunk, but Defence did not confirm this. It was stated in a press release that a Dutch Caribbean Coast Guard helicopter and a Defence diving team were helping to secure the NH-90, and that the flight recorder was the priority.The NH-90 helicopter, part of the HMNLS Groningen military equipment, was equipped with two heavy M2 machine guns and two Mark 46 torpedoes. It had a strong radar on board to detect objects both in the air and underwater.

In the Caribbean the NH-90 helicopter is mostly used for patrol flights; to detect vessels that are smuggling drugs, human beings and weapons; and to transport persons and goods. Defence has 19 other helicopters of this type. They will not fly for the time being, at least until the investigation has been concluded.

Dutch Armed Forces commander Lieutenant-Admiral Rob Bauer confirmed the fatal crash during a press conference in The Hague at 5:00am Monday Dutch time, 11:00pm Sunday Caribbean time.Bauer explained that he was only able to apprise the media of the crash at that time because the victims’ families had needed to be informed first. “The families received this terrible news not so long ago, and that is why we can only inform you now.”A so-called black hole was established on HMNLS Groningen immediately after the crash to prevent the crew from freely communicating with the outside world. “We needed to prevent that parents, partners or colleagues in the Netherlands were surprised by this horrible news by others,” said Bauer.Dutch Prime Minister Mark Rutte mentioned the crash at the opening of a press briefing in Brussels where the European Council has been meeting. “I want to start off with the sad news about the crash of the helicopter near Aruba where two Defence crew members died. I think everyone is shocked at Defence. Naturally we sympathise with the families, with the ones the deceased leave behind. It is really terrible news.”Dutch Defence Minister Ank Bijleveld-Schouten informed the Dutch Parliament about the crash on Monday. “The tragic news of the passing of the two military members has deeply affected us all. Our thoughts are with the next of kin, their loved ones, colleagues and others.”

Bijleveld-Schouten explained that the helicopter and its crew were part of the 860th Squadron of the Defence Helicopter Commando. “They are stationed on board of the navy ship in the Caribbean, HMNLS Groningen. Further investigation will have to show the cause of this fatal accident. As a precaution, all Dutch NH-90 helicopters will remain grounded.”Aruba Prime Minister called Sunday, July 19, a “dark day.” On behalf of the Aruba government, she extended her heartfelt condolences to the families of the deceased and wished them as well as the Royal Netherlands Navy much strength. “May they rest in peace.”It is anticipated that the Defence Safety Inspection will carry out the investigation. Defence has opened a condolence register for the two deceased crew members on its websitewww.defensie.nl. Also, the flags are flying at half-mast.