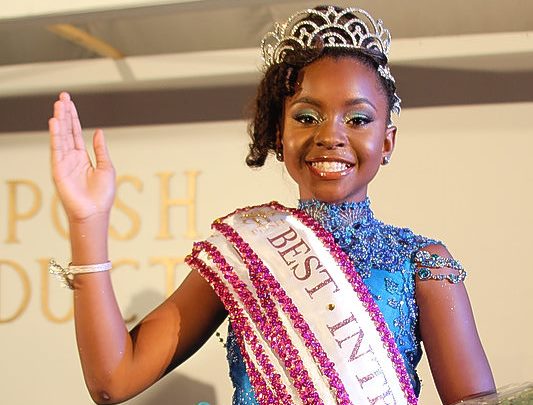 COLE BAY–Zidania Charles-Gumbes became the Junior Carnival Queen on Sunday evening during the Junior Queen pageant under the white tent in Princess Port de Plaisance Resort. Charles-Gumbes won almost all sashes in the competition and was considered the most popular contestant from the start of the pageant.

Jerinelle Louisa came in first runner-up, while second runner-up went to Leesje Amancio and third runner-up to Dashannique Pascal. Prime Minister William Marlin and Member of Parliament Tamara Leonard supported the event by showing up and encouraging the young ladies.

The show started at 3:00pm and organiser Posh Productions opened it with the Poshets dancers who did a classy dance number. St. Maarten’s Dance Theatre performed their hit musical “The Wiz” and incorporated the four contestants in their opening number.

The ladies were all well versed and presented introductions giving insight of what they have to offer and what aspirations they have. All four contestants scored high in their introduction round, but Louisa came out on top.

Posh Productions added another sash in the mix this year: Miss Academic, which reflects the delegate’s academic achievement during the school year, was awarded to Louisa.

The ladies of the Teen, Senior and Mature pageants will continue to prepare for their pageant nights in the Carnival Village next month.

Former contestant Myris Hall-York has dropped out of the competition due to medical reasons.