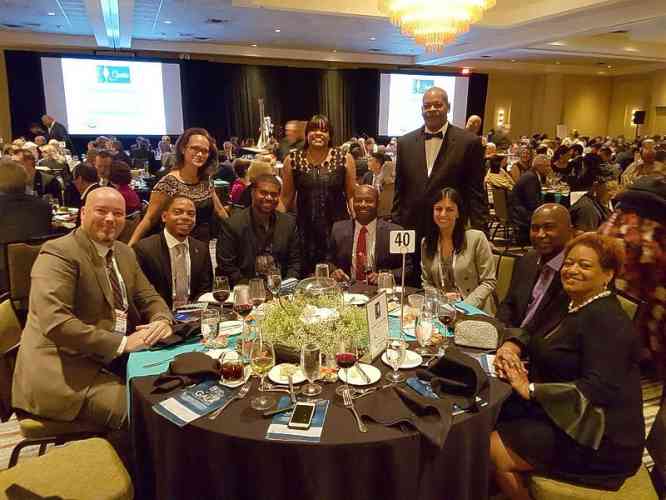 PORT– Based on discussions at the recently concluded Seatrade Cruise Global Conference in Fort Lauderdale, Florida, Port St. Maarten management discussed the industry outlook along with the forecast for St. Maarten specifically.

“Demand for cruising in general increased by 20-plus per cent over the last five years whereas the Caribbean as a region remained relatively stagnant in terms of market share. Key partners within the Eastern Caribbean region will be meeting in the near future to strategise on luring more passengers to the islands damaged by the last hurricanes, once again demonstrating the Caribbean is open in line with the Florida-Caribbean Cruise Association (FCCA) multimillion-dollar industry campaign.

“Both marque ports in the Eastern hemisphere – namely St. Maarten and Puerto Rico – topped the highest expenditure ranks with the last BREA (Business Research Economic Advisors) study for US $191.26 per passenger and highest crew expenditure of $149.66,” Port St. Maarten management said on Tuesday.

Port St. Maarten management spoke with the representative of the BREA study during the leading annual global business-to-business event for the cruise industry last week and discussed the updated BREA report which will be released later this year. BREA anticipates a more compressed number across the region because of the 2017 hurricanes that damaged a number of cruise destinations in the Northeastern Caribbean.

Port management pointed out that as a destination, “We must preserve our image of being a friendly and welcoming island having passengers shop at ease with the leisure to go into shops of their choice unhindered. The approach of aggressive sales tactics by individuals on the island will hamper the reviews online, which in turn may lead to lower demand for the destination and the stores.

“We are a rebounding island and Port St. Maarten has assured the cruise industry that the destination is building back better with more emphasis on the ‘Top Cruise Trends for the Coming Years.’ One of the top three trends identified by FCCA is ‘All Budgets Will Cruise.’ The 2018 Cruise Travel Report found that while cruising does skew a bit more to the affluent consumer than other types of vacations, almost all levels of income enjoy cruise vacations.

“The second trend is ‘Transformational Cruise Travel.’ This has been described as the next evolution of experimental travel that sees travellers taking a step further and seeking ‘transformational experiences,’ from cultural immersion and voluntourism to extreme adventures.

“The third top trend is ‘Sustainability at Sea.’ In the coming year there will be an even greater focus on sustainable tourism, with travellers participating in practices from recycling to voluntourism both on board and on land.

“As a destination we have to take the aforementioned into consideration and look at developing and offering niches in those travel trends in order to be able to continue to meet the demands of the cruise traveller,” Port St. Maarten management concluded on Tuesday.

Seatrade Cruise Global also brought together buyers and suppliers for the four-day conference and three-day exhibition. The conference in 2017 saw more than 11,000 registered attendees, more than 700 exhibiting companies from 113 countries and more than 300 international journalists.