Home Headlines & Top Stories Cruise ship arrivals to drop by at least 25 per cent next... 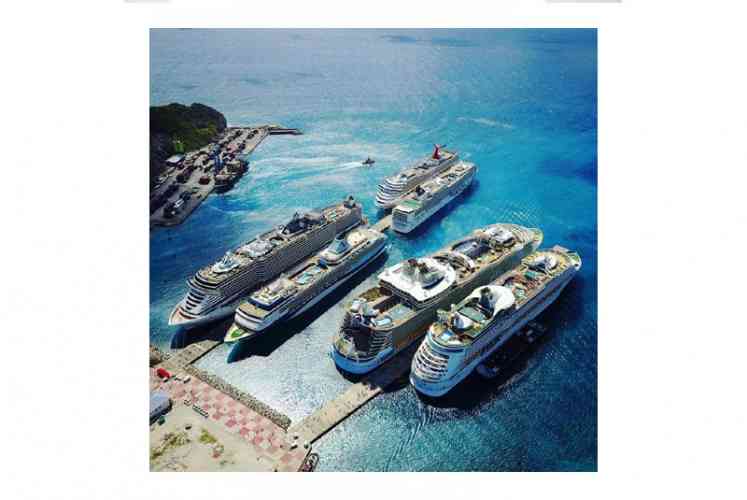 PHILIPSBURG–The number of cruise ships calling at St. Maarten is forecast to drop between 25 and 30 per cent in 2020, said Florida-Caribbean Cruise Association (FCCA) President Michele Paige in an interview with The Daily Herald on Thursday.

Paige said 456 of FCCA’s member lines had made stops at St. Maarten in 2018. This remained stable in 2019, with 453 ships scheduled to call before year’s end. However, this is expected to decrease by at least 25 per cent next year.

This decrease is not based entirely on poor performance by St. Maarten as a destination, Paige said, adding that ship arrivals in 2018 and 2019 were inflated, driven by the effects of Hurricanes Irma and Hurricane Maria in the region.

Cruise facilities in San Juan, Puerto Rico, and in Dominica, as well as Cyril B. Romney Pier Park in Tortola, British Virgin Islands, were not fully operational until recently. Now that they have come entirely online, cruise ships have been slowly moving back to other ports.

According to well-informed sources in the St. Maarten cruise industry, 12 calls by Norwegian Cruise Line (NCL) vessel Norwegian Epic have been rerouted to Tortola. Based on information on cruise ship arrivals from Port St. Maarten’s official website, 22 NCL ships docked at St. Maarten during the high season between November 2018 and April 2019. Only five NCL vessels are scheduled to make calls between November 2019 and April 2020.

NCL is not the only cruise line shying away from St. Maarten. Both Royal Caribbean and Carnival Cruise Lines have reduced their service by an average of 15 ships during the same period. NCL, Royal Caribbean and Carnival are the three dominant players in the global cruise industry, accounting for more than 70 per cent of the cruise market in 2018, according to website Business Insider.

While reiterating that St. Maarten is “a highlight” of the Caribbean cruise market, Paige noted that the unclear concession of St. Maarten’s port remains an impediment for FCCA member lines.

According to Paige, sources outside government made it known to FCCA in early June that the port was being opened for concession, with third-party companies making bids to operate Port St. Maarten.

“Whatever is being done, it should be transparent. If the cruise lines are doing business with someone, they would want to know in advance who they are dealing with,” said Paige, adding that FCCA has yet to see a request for proposal (RFP) from the St. Maarten government, which claims it has been in draft for four months.

She also said she had made it clear to government representatives during the FCCA Platinum Associate Membership Advisory Council (PAMAC) conference held at Sonesta Maho Beach Resort, Casino and Spa in June that FCCA and its member lines oppose third-party companies operating Port St. Maarten. For them, the port should remain in the possession of the St. Maarten government or be run by a consortium of cruise lines, said Paige.

According to her, Port St. Maarten and government said after the PAMAC conference that they are working on a transparent process that will not be limited to one party. They also said they are now forming a project team to issue structured communication to various stakeholders, including FCCA and cruise lines.

However, FCCA said on Thursday evening that government had informed it that this process could take up to six months.