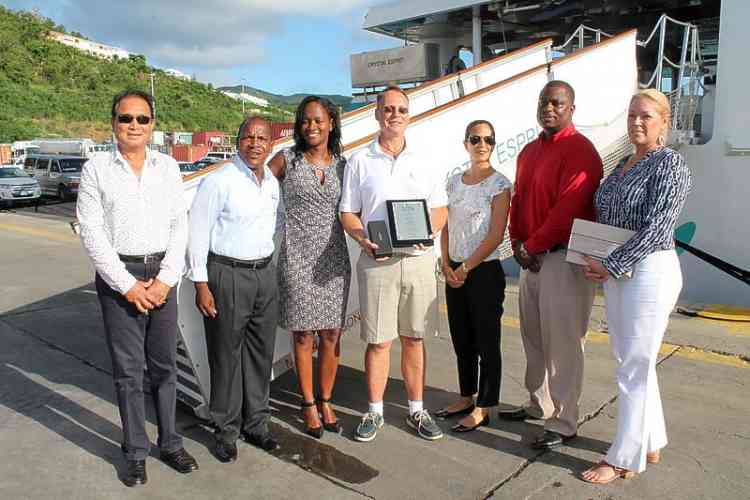 MARIGOT–The luxury six-star cruise ship Crystal Esprit was welcomed to the Galis Bay commercial port on Sunday by elected officials from the Collectivité, Port of St. Martin and St. Martin Tourism Office ahead of a scheduled cruise that began Monday.

The ship, the first cruise liner to dock on the French side since the recent hurricanes, will be home porting in St. Martin. On hand to welcome the ship’s crew and passengers were First Vice-President of the Collectivité Valérie Damaseau, Port Director Albéric Ellis, St. Martin Port Authority Chairman Ambroise Lake, St. Martin Tourism Office Director Kate Richardson, President Daniel Gibbs’ Cabinet Director Hervé Dorvil and other partners.
Ellis in his opening remarks at the reception noted the Port Authority and St. Martin Tourism Office have been working for a few months with Crystal Cruises to secure St. Martin as the vessel’s home port.
“We are delighted to have you here,” he said. “We are happy you have chosen to maintain the call here and maintain St. Martin as a home port, and for believing in us. We will do whatever is necessary to make sure the business grows in the next few months so that we can have you home porting for the next few years.”
The traditional inaugural plaque was presented to Captain Jan Rautavarra by Damaseau and Lake. The Captain turned out to be a musician and impressed the gathering with his skill on an instrument called a Chapman Stick.
Crystal Esprit carries 62 passengers but on this cruise only 25 as there had been many cancellations due to circumstances following the hurricanes and changes in flights. Next week’s cruise, however, already has 40 guests. Half of the passengers were from the USA, and others from the Netherlands, Israel, Mexico, and other countries.
Eighty (80) crew members look after 62 passengers when the ship is full, noted Guest Relations Director from Lithuania.
“The crew is always mentioned by our guests and Crystal Esprit has been nominated as having the best crew in the world,” she disclosed. “Most of the crew is from the Philippines, a few from the UK, from Italy, France, Sri Lanka, India, and some from Finland.”
The first stopover on the itinerary is Mosquito Island in the British Virgin Islands, followed by stops in Saba, St. Barths, Antigua, St. Kitts and Nevis, and back to Marigot. In December and January, a longer cruise itinerary takes in Montserrat, Guadeloupe and Ile des Saints.
Crystal Cruises, Expeditions and Yachting has three vessels in its fleet; Crystal Serenity, Crystal Symphony, and the smallest Crystal Esprit, plus three river ships.
Well-heeled guests on Crystal Esprit can enjoy a highly rated Michelin-starred restaurant on board plus a range of water sport toys such as jet skis and kayaks, and Crystal Esprit’s unique submarine, something that no other cruise ship has according to the captain.