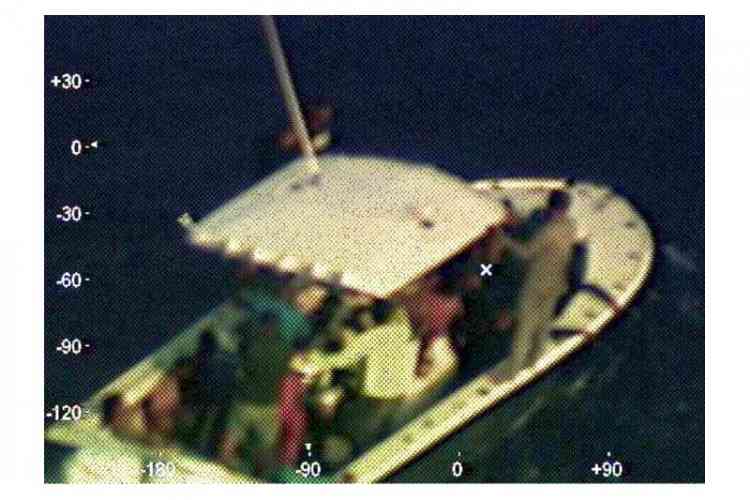 In this photo provided by the Coast Guard, a Coast Guard Air Station Miami HC-144 Ocean Sentry aircrew takes a photo of a disabled vessel that the aircrew located 130 nautical miles (210 kilometres) off Mexico’s Yucatan Peninsula on Sunday, April 14, 2019.

MIAMI(Newsweek)–The U.S. Coast Guard said it worked with a cruise ship to rescue 23 people adrift for days in the Gulf of Mexico. The agency confirmed in a release the rescue occurred 130 nautical miles off the Yucatan Peninsula.

The Coast Guard said a Cuban national made contact at 1:15 a.m. early on Sunday and claimed his brother and 22 other individuals were adrift onboard a disabled sports fisher boat. The caller told officials that 22 Cubans had been traveling from Cuba to Mexico on a wooden boat that lost power and had left them adrift for three days, the release said.

A Cuban-Mexican national then spotted the boat and took all 22 people on his sports fisher vessel. The vessel later malfunctioned, leaving everyone stranded at sea for an additional three days.

Two areas of interest were first searched by an Air Station Clearwater HC-130 Hercules air-crew but the plane returned to base after seeing no signs of distress and because it needed to refuel. The broken vessel was eventually located by the Coast Guard at approximately 8:40 a.m.

The Carnival Fantasy arrived on scene shortly after. Two rescued individuals had “minor medical issues” and were treated by the cruise ship’s medical staff. The ship was traveling from Mexico into a port at Mobile, Alabama, when it changed course.

According to Alabama-based WKRG (News5), the cruise ship’s captain made an announcement to passengers about the change in course at about 7:00 a.m. yesterday. Images of the broken-down boat were shared by passengers Marty and Shirley Fillingim.

“We were expecting a larger ship, that’s where your mind first goes, but to see that small of a boat in open water like that, with that many people on it was just something we were not expecting,” Marty Fillingim told WKRG. Pictures also emerged on Twitter.

Carnival did not immediately respond to a request for comment. The 23 rescued individuals will be transferred to Customs and Border Protection and Coast Guard Investigative Services in Mobile tomorrow morning, the U.S. Coast Guard release said. The vessel docks today.