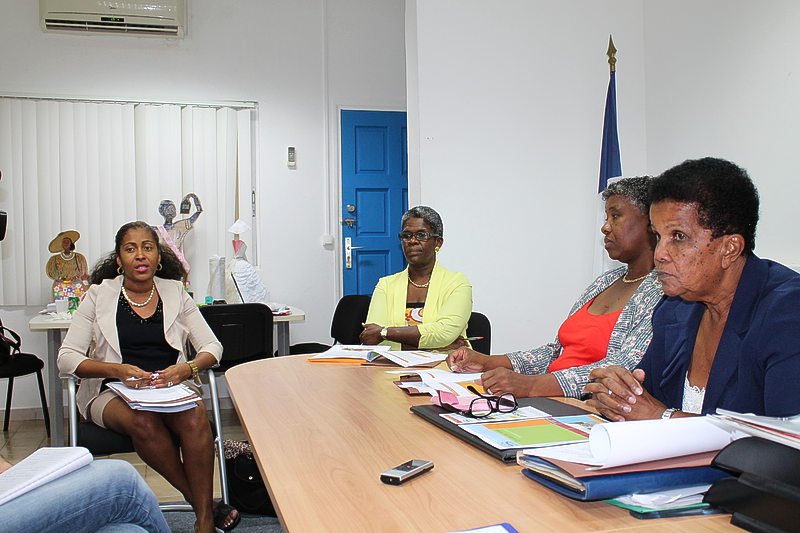 MARIGOT–Caisse Territorial des Oeuvres Scolaires (CTOS), the institution that manages after-school activities and produces thousands of school meals from its Central Kitchen, has disclosed it is saddled with a three million euro deficit, but gave assurance it is still able to meet all of its obligations for this school year.

The news was disclosed by CTOS President Maud Ascent-Gibs at a press conference Friday, also attended by Vice-President Yolande Sylvestre, CTOS Assistant Director Claudia January, and Chef du Service for after school activities, Sandra Angely.
Gibs suggested the deficit which came to light from an audit done in June is partly due to “mismanagement” by the previous administration.
“One of the causes attributed to this deficit stems from the protocol agreement signed in 2010 when it was agreed a certain amount of money, indemnities, was to be paid to employees, but from 2010 to 2016 nothing was paid to them,” Gibs explained. “That is until about two million had to be paid out for them in 2016. Also, we didn’t get the funds for the after-school activities which left us still running on the same budget.
“The private schools also owe us a lot of money because that was never monitored, and that has to be controlled. As soon as we took over a lot of old bills came in that had to be paid, including social security bills.”
Other causes attributed to the deficit include food wastage, lack of portion control, inefficient purchasing, and no controls of merchandise coming in or going out.
Despite the deficit, Gibs said the Central Kitchen can still produce around 5,000 meals per day for the 19 school refectories. The kitchen has the potential to produce 8,000 meals per day if necessary. There are 17 permanent (agents titulaire) kitchen cooks and 23 administrative staff.
“When the children are registered and the parents pay for the meal tickets that money helps to pay for the food,” she added.
A supplementary budget will be compiled on October 20, to see how that will improve the situation. Currently the budget is in the hands of the regional accounting chamber.
With regard to the shorter four-day school week and different hours, there is now more emphasis on providing after-school activities and having enough staff to run them. The ratio is one animator per 18 children. Chef du Service for after school activities, Sandra Angely, disclosed 700 children have registered for the activities.
Helping matters is the increase in the annual fee parents pay for after-school activities, from 10 euros per year to 50 euros per year.
Gibs said CTOS worked with insertion associations before with persons who were either on “Contrats Aidé” or “Contrats d’Avenir” but found those people were being paid on their contracts but also charging CTOS, effectively getting paid twice.
“We don’t have much option but to ask the associations to help, but in a different way than before. It is still going to come at a cost,” she concluded.