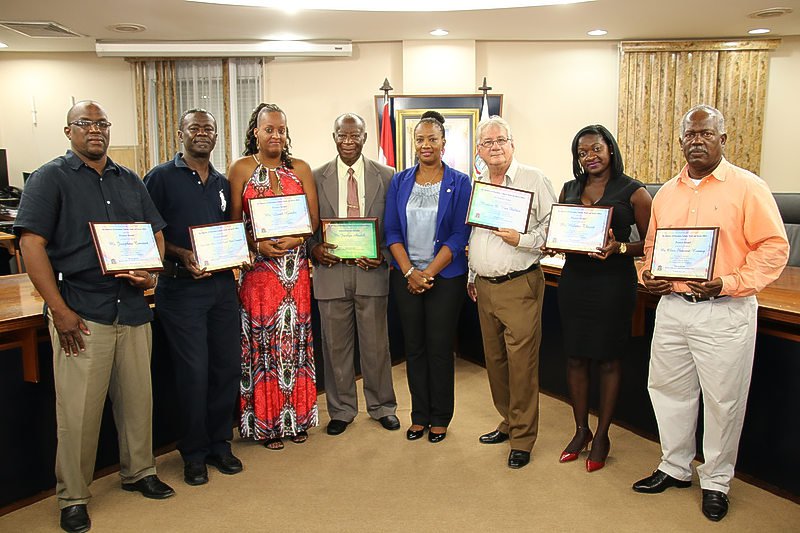 PHILIPSBURG–The persons responsible for starting the Carnival Village some 46 years ago were honoured by Government during a ceremony on Friday.

Minister of Culture Silveria Jacobs gave inspiring words to family members about eight persons who opened the first booths in the Carnival Village. The man who spearheaded a fact-finding mission to St. Thomas was Jocelyn Arndell to find out how the booths were erected on that island during its Carnival season.

The late Lt. Governor Reinier O. van Delden of the Windward Islands, attentive to the sentiments of the population of St. Maarten, saw and recognised the hunger in the people wanting to express themselves and display their culture to the world. Van Delden, wanting to build on that momentum, came up with a plan of action to capture the positive energy, harness it in a forward-looking direction and thereby support the spirit of self-confidence that was being displayed.

Part of the plan of action was to get someone on board who could carry out the vision. He commissioned Jocelyn Arndell, who travelled to St. Thomas along with Chief of Public Works Alexis Arnell and Chief of Finance Johan Dijkhoffz who were on a mission to source potable water and bring it back to the island to supply the hotels that were part of the fast-developing tourism industry.

A light sparked in Jocelyn’s head and he started to think on how something similar to what he witnessed in St. Thomas could work in St. Maarten. That was the genesis of our Carnival Village. Jocelyn brought the idea back to St. Maarten in April 1970 and refined it to suit St. Maarten’s context. Seven months later, on November 11, 1970, the Carnival Village was born prematurely.

Minister of Culture Silveria Jacobs gave a detailed account of how Carnival Village had started and how it has progressed to what the island has now.

“The Carnival Village started out with eight booth spaces at NAf. 15 each. Additionally, the electricity company was approached to provide free electricity for the Festival Village. In those days, the entrance fee for international shows ranged from NAf. 3 to NAf. 5, the stage was made from two flatbed trailers joined together with the Courthouse as the backdrop painted by Bill Art,” said Jacobs.

“To give birth to a baby is a miracle, to be born prematurely is even more exciting, but it is another thing to sustain and ensure the baby is nourished and developed adequately taking all of the sensitivities into account. When eight persons voluntarily stepped up to be godparent to the baby, it was no longer a secret that the child was a child of destiny.

“Religiously, year after year, the child was nurtured and the community watched the baby grow from a toddler to a teenager to a full-fledged Carnival/Festival Village which we know and enjoy today.”

In addition to the eight pioneers, the late Lt. Governor van Delden was honoured posthumously as well for having the vision of foreseeing a venue to embrace the culture of St. Maarten. Jocelyn Arndell was honoured for carrying out the mission successfully by bringing back to St. Maarten the concept of a Carnival Village that he saw on his mission to St. Thomas, said Jacobs.

“The Lifetime awards that were presented intimately linked to human development and to poverty alleviation: There is no sense in human development if it is not sustainable, if it harms the planet, if it does not include all. This is the focus of people-centred development strategies.

“Sustainability draws heavily from culture, our strongest social cement, promoting inclusion and allowing societies to draw energy from the past to build a more sustainable future. Culture is a source of resilience and a bridge for reconciliation in the wake of conflict. It is also a wellspring of creativity and innovation, an essential source of revenues and jobs.

“Sustainability means building the capacities of our people through science, research and the sharing of knowledge, enabling innovation, better anticipation of risks and preparation for the hazards of an uncertain world; It means respecting, strengthening robust and resilient people for a better brighter and sweeter St. Maarten,” concluded the minister in her speech.

A short reception followed where the family members reflected about Carnival’s past.