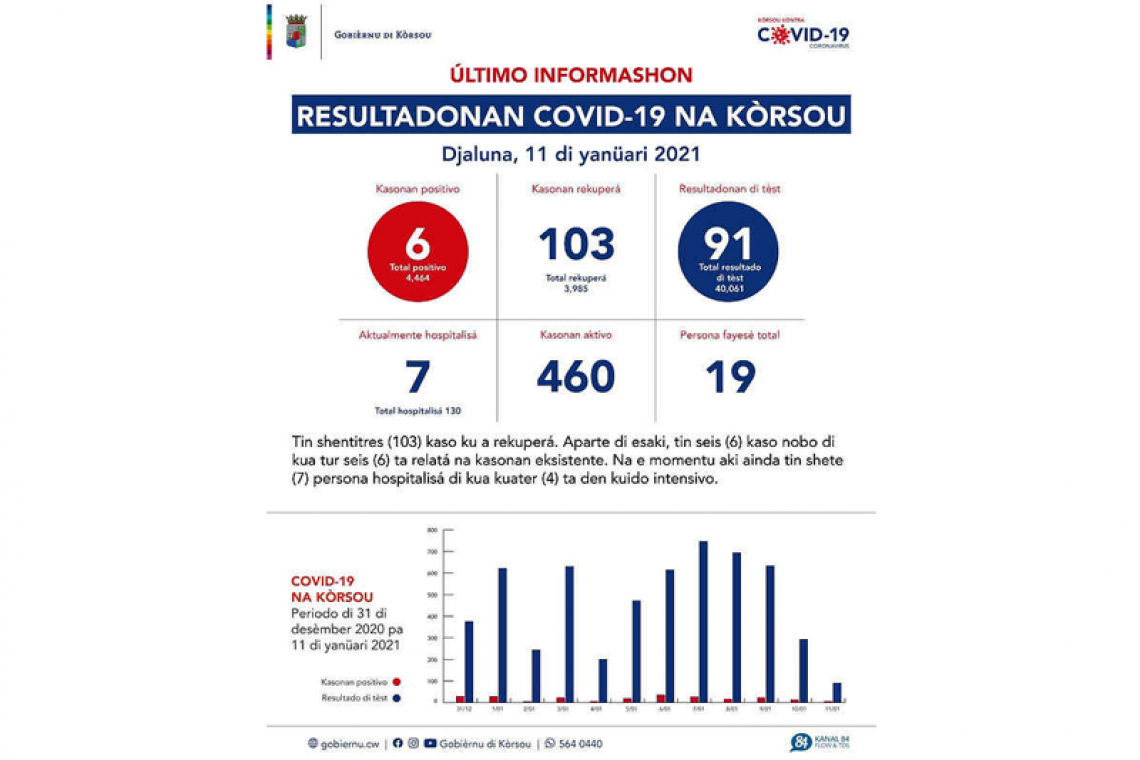 WILLEMSTAD–Curaçao’s COVID-19 restrictions will be eased starting this Wednesday, announced government during a press conference on Monday. The curfew changes from 10:00pm to 11:00pm, and the ban on serving alcohol (“lei seku”) is being lifted, except for casinos.

Restaurants can now stay open until 10:00pm, instead of 8:00pm. On terraces and outdoors, they may receive up to 50 per cent of normal capacity.

Super- and minimarkets may operate according to their permit up to 8:00pm, and are also limited to 50 per cent of normal capacity.

Prime Minister Rhuggenaath thanked the population for observing the rules and emphasised that the island is one of the few places worldwide where measures can now be relaxed. They will again be evaluated in three weeks, on February 1.

Epidemiologist Izzy Gerstenbluth emphasised that people still need to be careful by adhering to hygiene and social distancing practices to ensure that the number of new cases remains low. He said the infection rate must remain below 1.

Curaçao Restaurant Association (CRA) earlier said it assumed there would be a relaxation. In a press release, they had emphasised the importance of patrons being able to inside again “and with the right protocols this is quite possible, as is evident from the fact that casinos and other venues can also receive people.”

Furthermore, CRA advocated bringing the curfew back to 11:00pm “as this will allow our members to receive more guests without having too many at the same time.”

Once again allowing the consumption of alcohol was also called for. “Having a drink while sitting at a table will not lead to more infections, but contribute to the dining experience.” An alcoholic beverage with meals is not only pleasant, according to CRA, but the lack of such is considered by many as reason not to eat out, which results in a lot of turnover loss.

The association believed the hospitality sector was suffering too much with the restrictions in place, which also created unfair competition. In addition to the opening of the “trùk'i pan” during restaurant hours, more and more persons were also finding their way to the resorts where alcohol may still be served.

“It's no secret that during the holidays hotels were packed and big parties were held in various places. That while the restaurants were still limited to 8:00pm, and without the possibility of serving alcohol.”

CRA was outraged that after the opening of casinos, where indoor spaces may be used, there had been no response to its proposal to make restaurants accessible with the correct protocols. “We therefore assume that this is part of the upcoming easing of measures. Otherwise, except for the nightclubs, all indoor venues are open, except for the restaurants. This is an unworkable situation for a sector that has already been hit so hard in the past year, as we have read in the report of the Central Bank.”

According to the release, the outlook for 2021 is good, and the catering industry can recover if the situation returns to normal in the short term. CRA is currently researching the figures of 2020 to get a good picture, however, it is already clear that last year was difficult.

CRA made an urgent appeal to government to consider the sector which represents a lot of employment, and has been hit hard by all the measures taken in recent months. “Without help or relaxing the precautions, more jobs are in danger of being lost and more restaurants will have to close their doors.”