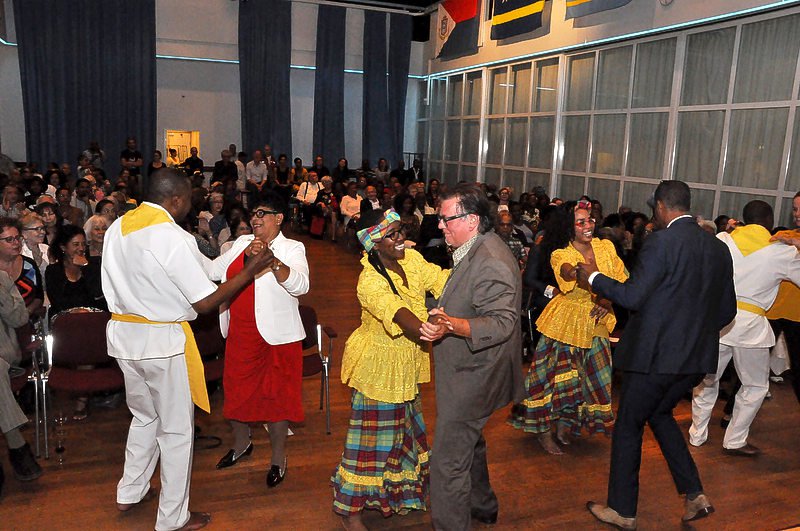 AMSTERDAM–Leader and hero of the August 1795 slave revolt in Curaçao Tula was commemorated and honoured during a special gathering at the Amsterdam City Hall on Wednesday.

The very well attended evening with dance, speeches, a monologue and debate was organised by the National Institute for the History of Dutch Slavery and its Legacy NiNsee together with the Antillean Network Association VAN, in cooperation with the City of Amsterdam.

Tula was the leader of one of the largest slave revolts in the Dutch Caribbean. On August 17, 1795, several dozen slaves, lead by Tula, put down their work on the Knip Plantation in the western part of Curaçao.

A sizable group of military was dispatched on the order of the colonial authorities in Willemstad. The group of slaves attacked several other plantations in Banda Bou. The action soon turned into a violent struggle that claimed several lives. Tula asked for the slaves in Curaçao to be freed just as the slaves in Haiti were when the French abolished slavery and since the Netherlands was occupied by the French, the abolition of slavery should apply to Curaçao as well.

Tula and the other leader, Bastiaan Karpata, were arrested on September 19 and on October 3 they were executed at Rif, their heads placed on a pale and bodies thrown into the sea. A third instrumental person in the revolt, Pedro Wacao, was also executed and 29 other slaves were hanged. To this day, the 1795 slave revolt is commemorated as the start of a long and hard process of the emancipation of the Curaçao people.

This emancipation process, the importance of eradicating racism and fighting for equality were recurring phrases during the event in Amsterdam on Wednesday evening in the speeches by NiNsee Chairman Antoin Deul, Dutch Caribbean organisation Foundation Ocan Glenn Helberg and spoken words artist/poet Gershwin Bonevacia, as well as the panel debate.

Deul and Helberg drew a comparison to slavery, oppression and the initiative law proposal of Member of the Second Chamber of the Dutch Parliament André Bosman of the liberal democratic VVD party which seeks to restrict the admittance of new immigrants from Aruba, Curaçao and St. Maarten to the Netherlands. This law is slated to be handled in Parliament next month.

“A civilised country doesn’t have admittance regulations for citizens of countries that are in the same Kingdom. A civilised country offers formal apologies for 400 years of slavery and goes over to reparation payment,” said Deul.

“Is it treason if I implore on the Dutch politicians not to treat people from the Dutch Caribbean as second class citizens?” asked Helberg, referring to the title of his keynote address: Tula, a traitor or changer? He asked everyone to look in the mirror and decide for themselves who they were: a traitor or a changer, someone who progressed at the expense of others or someone who looked for new paths that would benefit the future generations.

Deul wanted to know why there was still no real recognition for the Dutch slave trade, why to this day there was still racism and why a white life was still worth more than a black life. He said it was up to the people with slaves as their ancestors to force equality and true freedom of the people, a matter which Deul said NiNsee would again bring to the attention of the Dutch Government.

Tula fought for freedom and equality. What drove him to do so, asked speakers Deul and Helberg. “Nowadays we would call Tula a human rights activist. He had a clear goal, he had ideals and felt responsibility. He wanted freedom and equality for his people. He was a man of change. But, like anyone who fights for change, he was met with resistance and seen as a traitor by the establishment and executed as a traitor,” said Helberg, who called Tula one of the great men of this world.

Deul painted a picture of a wise man who knew several languages, who along with an army of some 2,000 slaves and freed slaves fought a hard and smart battle for five days against a cruel colonial regime. “He wasn’t prepared to stand down because he was convinced that freedom and equality was a right of everyone.”

Poet Gershwin Bonevacia spoke of Tula as his source of inspiration to carry on the struggle of true freedom and equality for the descendants of slaves. “Centuries later, our brothers are still in living in captivity.” Stylist and artist Laurindo Andrea shared a monologue with Tula, an imaginary meeting with the revolt leader in which they spoke of the struggle of the people, back in 1795 and nowadays. He thanked Tula for his inspiration and said that he would continue the struggle.

Wednesday’s event was not the only one that was organised in honour of Tula and the great slave rebellion. Last Sunday, August 14, Tula was commemorated in a musical way during the 19th edition of the Amsterdam Canal Festival. There were performances of ZO Gospel Choir and singers Shirma Rouse from St. Eustatius and Giovanca from Curaçao.

On August 27, the Dutch Caribbean organisation Foundation ProFor, in cooperation with NiNsee, will dedicate attention to heroes Tula, Bastiaan Karpata, Pedro Wacao and others who gave their lives for the liberation of slaves.

Through the so-called Tula Table, ProFor wants to promote the sharing of information on the slave revolt heroes and slavery in general. Joan de Windt will organise a workshop about slavery. A panel discussion will be held after the showing of the movie Buchi Fiel, which tells the story of a Curaçao slave. Financial support for the event was granted by the City of Amsterdam.