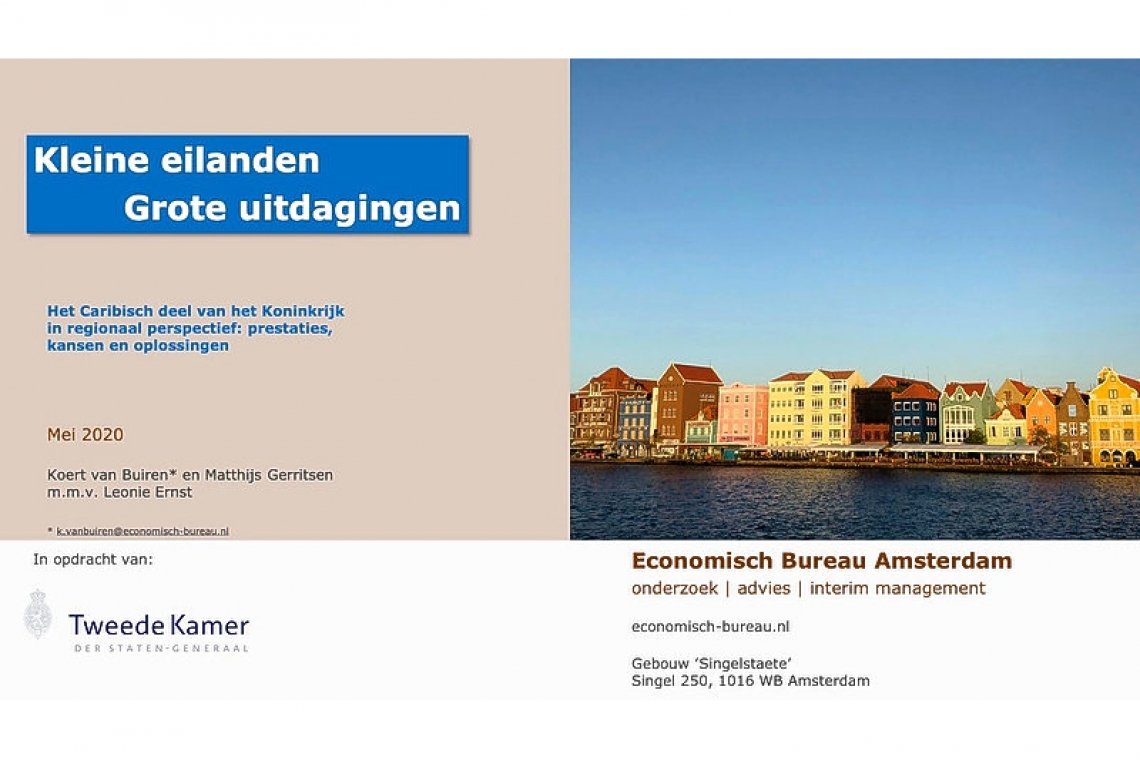 THE HAGUE–The COVID-19 pandemic shows the vulnerability and the lack of necessary maintenance of the economies and government finances of Aruba, Curaçao and St. Maarten. Structural reform and long-term stringent budget policy are needed for sustainable government finances.

The report “Small islands, big challenges” of the Amsterdam Economic Bureau, written by Koert van Buiren and Matthijs Gerritsen, was in the making long before the coronavirus crisis hit, but its findings are very current, and the addendum which describes the consequences of the pandemic for the three Dutch Caribbean countries is on point.

According to the report, the corona crisis will cause an unprecedented economic downturn of 14-18 per cent, followed by a partial restoring in 2021. The debt quota of Curaçao and St. Maarten, which already showed worrisome development before the pandemic, will increase to untenable levels of about 90 per cent. Aruba’s debt quota will rise to a record level of about 120 per cent.

The corona crisis not only exposes the vulnerability to external economic shocks of largely tourism-dependent Aruba, Curaçao and St. Maarten, but it also shows the consequences of decades-long lack of necessary maintenance of the economy and government finances.

The lack of structural reforms has dealt a severe blow to the already-weakened economic structures of Aruba, Curaçao and St. Maarten. An integral economic and financial reform programme is necessary for the countries to resume growth after the current crisis.

It is plausible that the post-corona growth path will be under the pre-corona level due to the higher debt burden, higher unemployment and diminished interest in the islands as tourist destinations as a result of the international economic effects of the corona crisis.

Structural reforms will be necessary to make the post-corona economies of the countries more sustainable and resilient. In the report the execution of a broad reform programme is proposed, aimed at the labour market, the investment climate, the capital market, the public sector, health care and social welfare, to make the countries more sustainable and resilient.

Despite the calls by various entities, including the International Monetary Fund (IMF), Aruba, Curaçao and St. Maarten so far have foregone carrying out reforms in the mentioned areas.

“The consequences are: a growing group of outsiders and a decreasing group of insiders on the labour market and in social life; a sizable informal economy; an unequal division of prosperity; high cost of the public sector, health care and social welfare; lower labour productivity and participation; a weak international competition capacity; deficient working of the capital market; and insufficient room for entrepreneurship and competition. A sizable economic potential has remained unused.”

According to the Amsterdam Economic Bureau, structural reforms will have to be carried out with high priority to strengthen the three countries’ post-corona economies. Delaying this process is out of the question.

The countries cannot do this alone. The corona crisis increases the importance of access to international know-how, technical support and funding. “Economic reforms are complex and wilful. Realising an integral reform programme within a short period of time cannot be done without actual assistance from outside.”

On the positive side, the point of departure of Aruba, Curaçao and St. Maarten remains relatively favourable. The countries have relatively strong institutions, open economies and high prosperity levels, higher than those of the region. “These are important determinants of an attractive investment climate which can be utilised with the necessary reforms.”

“In this manner, the Kingdom can attain more economic power and offer the security that the government tasks which are essential for socio-economic development can be carried out adequately in all countries of the Kingdom.”

The Permanent Committee for Kingdom Relations of the Second Chamber of the Dutch Parliament received the “Small islands, big challenges” report digitally last Friday. The Committee had asked the Amsterdam Economic Bureau to draft the report.

The Committee wanted a working document that focused on exploring the opportunities and solutions for the Dutch Caribbean islands. The report is a follow-up to the “Core figures for the Kingdom” document the Committee had drafted in 2019.

The “Small islands, big challenges” report speaks of a “silent crisis” that evolved not only in the Dutch Caribbean, but also in the wider Caribbean. The Caribbean region barely had any growth in prosperity in the past decade.

Causes for this lack of prosperity growth include high government debt; structural trade deficiencies; natural disasters; small, open and vulnerable economies; a low competition capacity; and the so-called middle-income trap. The coronavirus pandemic has added much misery to that already vulnerable mix.