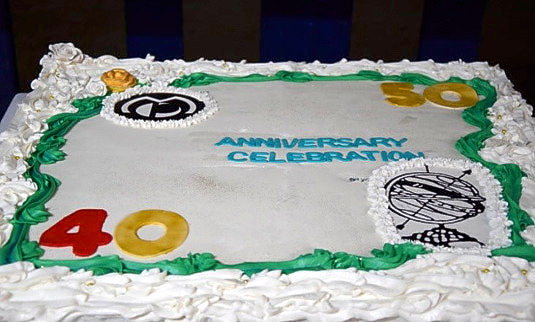 The Jubilee cake at the formal reception held in October 2016.

A scene at the fundraising gala in March 2017.

The staff masquerade gala in June 2017.

The educational symposium in August 2017.

PHILIPSBURG–The curtains have closed on the anniversary celebrations for Sundial School and Milton Peters College (MPC) that recently celebrated their 50th and 40th anniversary respectively.

The celebrations kicked off in October 2016 with a formal reception for key community and governmental partners and continued in February 2017, with an MPC school reunion where approximately 500 past students turned out to a meet and greet with past teachers. “Though it was tricky to see all your past classmates, those in attendance agreed that it was great fun,” it was stated in a press release.

A fundraising gala was also organised in March in an effort to raise money for the Information Technology (IT) projects at both schools. “It was a successful evening and the funds received will be specifically used for Information Communication Technology (ICT) development (purchasing of smart boards etc.) at Sundial School.”

The schools held a talent show in May, featuring performances by former and current students and staffers.

“In celebrating the anniversaries of these schools, management knows that St. Maarten is in fact celebrating the hard work and dedication of their teachers. For this reason an amazing staff Christmas party was organised in December 2016 and a grand masquerade gala was organised for the entire staff of both schools in June 2017,” the release said. “The night, started out a bit rocky with lots of rain and rumours of flooding in some neighbourhoods. However, those who braved the weather mostly agreed that the evening turned out to be quite memorable.”

In August, Sundial School held its student reunion where past Sundial students and teachers gathered at the school for a fun filled night. As not everyone who wanted to be there was able to attend, the organisers are contemplating another meet and greet at a later date.

The celebration ended on August 10, with “an inspirational and thought provoking” symposium organised by the schools for the entire staff of both schools as well as the staff of the other secondary schools in the country. More than 350 persons were in attendance. A keynote address was delivered by University of St. Martin (USM) President Dr. Francio Guadeloupe who expounded on the historical perspective of education and its development in St. Maarten. Alan November, the second guest speaker for the day, challenged the audience to view the student as the owner of the learning that takes place within the classroom. “It was the perfect start to what we hope will be a successful school year.”

The School Board for Secondary Education SVOBE thanked its sponsors that made its entire celebration possible.