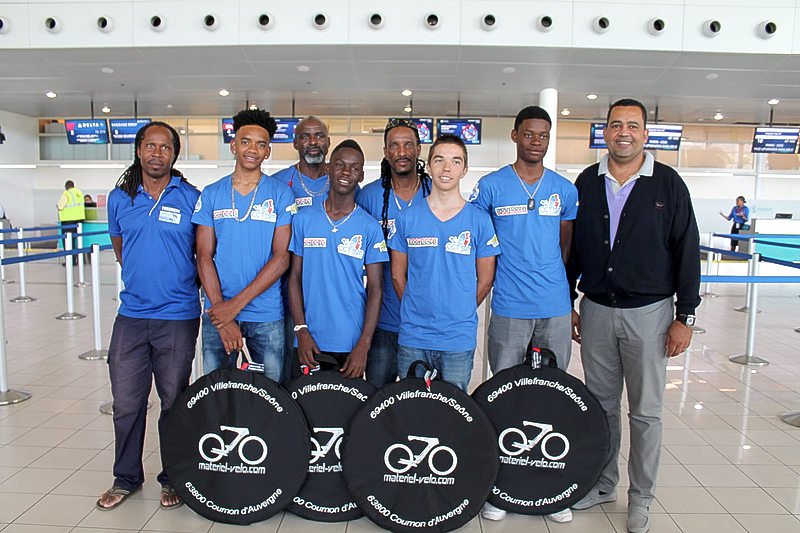 MARIGOT—After their success at the Caribbean Championships in St. Lucia, the French side’s leading youth cycling selection are travelling again, this time to Les Championnats de France L’Avenir (Championships for the Future) to be held in Civaux, near Poitiers, France, from August 18 to 21.

The team comprises the two Juniors Alban Clerc (16) and Kimani Weinum (17) and two Cadets, Kianny Noël (15) and Adelio Brooks accompanied by their coaches Romeo Lake and Patricio “Blade” Carty. It’s the first time the team is participating at a major event in France.
In St. Lucia the team came away with a silver medal for Alban Clerc and bronze for Kianny Noël. Brooks did not compete in St. Lucia.
Initially there was doubt over whether the team could leave on Wednesday as the Air France plane was overbooked however with some upgrading of passengers the team was able to board and take off.
President of the St. Martin Territorial Cycling Committee, Remi Daniel, explained the Championships in France are for all youth categories, male and female, and as the name implies is designed to prepare the future for up and coming youth cyclists.
“It’s going to be a big, first time experience for them,” said Remi of the St. Martin team. “They will be riding against other delegations in the Caribbean and from France. It’s the objective of all cycling committees to have youngsters going to that championship to assess their level against other teams.
“Not only that just participating can open doors for riders who might get observed by talent scouts. To attend a school in France and ride for a team, that’s stepping up to another level. So that’s our goal to give them this exposure and I’m sure they will make St. Martin proud.”
It was understood Juniors will be doing a 25 K time trial and a 135K road race. Cadets will do a 75K race, five laps of a 15K circuit.
Present to see the team off and wish them luck was Territorial Councillor for Sports Alain Gros-Desormeaux, who noted the Collectivité sponsored the air tickets for the team.
“It’s always pleasing for the Collectivité to see any sports team going off island to represent St. Martin,” said Gros-Desormeaux. “We make a point of following the cycling teams and have always been very pleased with their results.
“I would like to thank all the coaches and managers who invest their time to train the youth and especially in cycling we are seeing more and more of the youth on the road, and the training is paying dividends. I’m very happy that the Collectivité’s emphasis on youth and sports is paying off.”