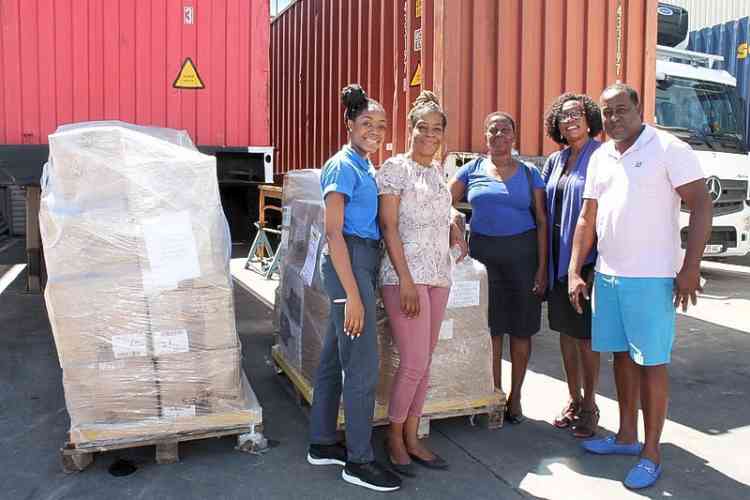 MARIGOT–A generous gesture by the competitive cyclist Jason Rousseau, who is based in France for racing and study, will see children from various associations on both sides of the island receive clothes, books, school supplies, and Christmas gifts.

A brief ceremony was held on Wednesday at freight forwarder Sea Air Services (SAS), a partner in the initiative, in Hope Estate, Grand Case, where three large palettes of materials were received.

“Jason wanted to do something for the children after Hurricane Irma, so he got together with his friends and contacts in France to see what could be done, and this is the result of that collection,” explained Jason’s father Gilbert Rousseau. “I in turn have contacted associations to see which children have the most need. There is my association in French Quarter, a Dutch-side association and the French-side Soroptimists Club who will be distributing to the ones in need.”

“Jason just wanted to give back to the island that has helped him excel in cycling. He started collecting with the help of those associations in France in November 2017. There were difficulties with shipping to St. Martin after the hurricane and that’s why this consignment only arrived a week ago.”

One of the recipients will be Alpha Omega Foundation on the Dutch side. Its Director Sharon Henson, Jason’s aunt, was present with her daughter, Keisha Rousseau.

“We have 25 children who we feed and educate every day, so they will be very excited to be receiving some of these materials,” said Henson.

Also, present were two members of the French-side Soroptimists Club, Annette Philips who is new President Elect for Soroptimists International for the period 2018-2020 and Past President Louise Carter.

“Jason wanted these materials donated to associations and schools, especially children that suffered through Irma, so we are receiving on his behalf,” said Philips. “We would like to thank him for this great initiative.”