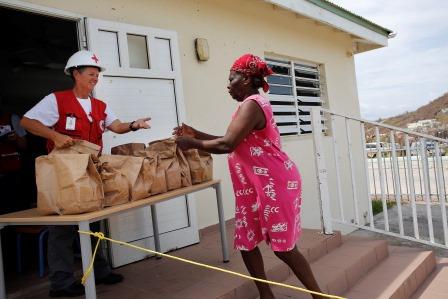 THE HAGUE–The Netherlands Red Cross, aided by a group of professionals from the Dutch festival industry, on Monday started the preparation and distribution of school meals for pupils of seventeen St. Maarten primary schools.

In total, 4,800 pupils will receive breakfast and lunch at their school in the coming three months. The school-meals programme has been secured in an agreement with the St. Maarten Government and is the result of a unique cooperation with Open-House, an effort that connects the knowhow and expertise of the Dutch festival sector.
The programme enables the schoolchildren to have at least two hearty, healthy meals a day in the hard times after Hurricane Irma. Obviously, this will help the children, but also their struggling parents. The breakfast and lunch packages are prepared in the Sundial School kitchen and transported to the primary schools in four small trucks, the Red Cross stated in a press release.
Sundial School needed to be repaired first before the mass food preparation could start. The hurricane had damaged the school and it could only be used as a location after the roof was repaired by Dutch Genie military personnel and the kitchen was restored.
Multi-disciplinary teams of at first six and later four professionals from the Dutch festival sector travelled to St. Maarten and realised this project together with the Red Cross volunteers on the island. The festival professionals, who are all entrepreneurs and freelancers, offered their assistance voluntarily. Their task was to create a mass catering, embedded in the local culture.
Open-House is an innovation platform for the festival industry, established by Duncan Stuttenheim of the ID&T festival company and the Dutch Ministry of Economic Affairs. Together with the Red Cross, Open-House has been working for a while to discover and test new forms of emergency relief.
The idea to send the festival professionals to St. Maarten formed soon after the devastation caused by Hurricane Irma became clear. The professionals working in St. Maarten are from Backbone International, Crewfood, New Nomads, Solid Crew and Staff, De Loods and ArtFX Events.