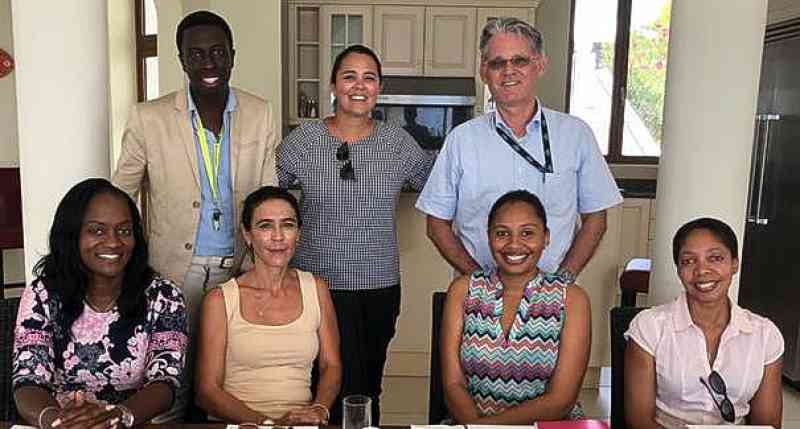 Scheduled for December 10, Belmond’s La Samanna will open her doors to again offer guests the best of the best in hospitality. The 55-acre property is perched beside one of the most spectacular private beaches in the Caribbean, offering 83 rooms and suites, 8 villas, 3 restaurants, 2 bars, 2 pools, tennis courts, watersports centre, fitness centre, spa and an events centre.

Leading up to the winter season, La Samanna will participate in the travel industry familiarization trip that is being arranged by St. Martin Tourism Director, Aida Weinum with representatives of American Airlines, Expedia and several wholesalers in attendance. The visit is scheduled to take place between November 1 and 5. The Belmond team will also attend IFTM Top Résa later this month to promote the re-opening of La Samanna and the new offerings the resort will offer.

Damaseau shared with the Belmond La Samanna team the work the tourism office is doing to attract new visitors and bring back those persons that have visited before. She spoke of the first joint partnership between the French and Dutch tourism offices that was announced earlier this year and charged to synergize on the promotion of the destination.

On behalf of the St. Martin government, she also extended an invitation to the Belmond La Samanna management team to join stakeholder meetings and to participate in the upcoming destination press conferences that will be held in Brazil and Argentina.

Damaseau used the occasion to update the team on the reopening of the ground floor of the Princess Julianna International Airport (PJIA), scheduled for the beginning of November and disclosed that already several North American legacy carriers will reintroduce service to the island for the winter season.

“We are very excited about the forward momentum and growth that is taking place for our island this year. The confirmed reopening of Belmond La Samanna is a significant step in reasserting our position as the destination of choice in the Caribbean. Working closely together with our partners and stakeholders, we are able to leverage our strength and increase our impact in the marketplace and look forward to working with Belmond La Samanna to ensure the successful debut of this new and improved legendary resort” concluded first vice president Damaseau.