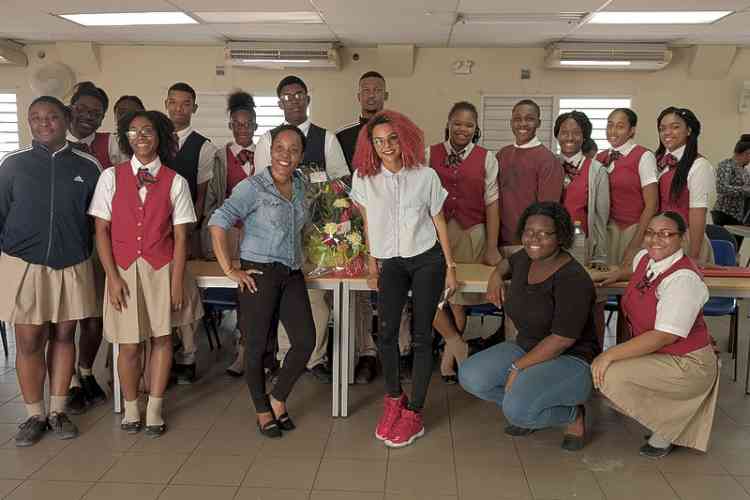 PHILIPSBURG–Dancer Bianca Dijkhoffz delivered an inspirational presentation about her journey as a dancer in the music/entertainment industry to Charlotte Brookson Academy (CBA) of the Performing Arts fifth and sixth form students recently.

CBA Performing Arts Director Nzinga Lake said in a press release that the initiative was intended for students to get ideas from a professional St. Maarten dancer about the career possibilities that they could have as artists. “Secondly, (it was an) example for CBA students to see the various ways that we can, as a community recognise and honour the amazing talented young artists that we have in St. Maarten,” said Lake.

The dancer told students that she was “told many times that dance was not a career.” She also had the support of important people in her life. “This, to date, still remains a challenge throughout our community as dance is still not as recognised as a professional career as much as the traditional career choices in academia such as doctor, lawyer, teacher, biologist, scientist, engineer, etc.,” it was stated in the release.

The dancer also said that she continued to practice and focus on her dreams because dance was her way to express herself. She told students that, “as a dancer you must be focused, disciplined and committed in both your performing arts and academically… Don’t give up, be yourself and don’t let anyone define you.”

CBA said students appeared to be “intrigued” by the 20-year-old dancer’s description of her travels and work in New York, Los Angeles, and most recently Japan.

Dijkhoffz said in her field success is directly linked to “having a strong work ethic, future aspirations, time management, and keeping up to date with the latest dance and music trends.”