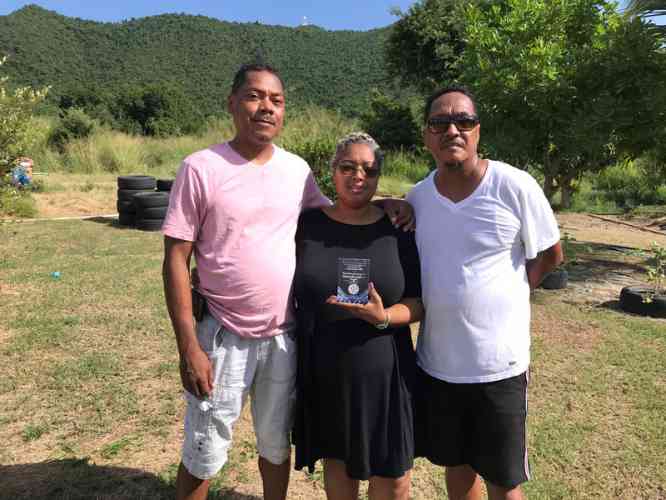 MARIGOT–Many prominent personalities, elected officials and cultural figures from both sides of the island gathered in the gardens of Bellevue on Sunday to celebrate the life and work of the late Daniella Jeffry, sharing with her family and close friends the memories and anecdotes that form part of her rich legacy.

A cultural jollification in the Bellevue gardens hosted by Ras Touza Jah Bash was a fitting venue for peaceful and joyful reflection. The afternoon was filled with songs, performances and personal tributes, interspersed with a medley of video clips of Daniella’s interviews shown on giant screens on programmes such as Oral Gibbes’ show, Profiles of the Windward Islands, and of the speeches she gave, such as at the Freedom Fighters Marcus Garvey tribute.

A portrait of Daniella accompanied by her books laid out on a table was placed at the entrance along with a condolence book for those who wanted to write personal messages.

Following an opening prayer from Pastor Eugene Hodge, Clara Reyes and Ife Badejo performed a duet of two songs, “No matter where I go,” written by Josiane Fleming, and the Lino Hughes classic, “St. Martin is my home.”

“She was able to bring all cultures together, blend traditions and had a marvellous way of interacting with people,” he said. “She was passionate about the people, the island, the culture, and she always promoted St. Martin to the fullest. She brought that special embodiment to what the island is. We hope there will be others now who will carry her torch.

“On behalf of the St. Maarten government we extend our deepest sympathy to the family. She left her mark and will never be forgotten.”

Artist and poet Ruby Bute presented three of Daniella’s children present, Jean-Marc, Tiana and Joseph, with an award on behalf of Philipsburg Jubilee Library which recently celebrated its 60th anniversary.

“Her work must be continued for the sake of one island, one people, one destiny, from the North to the South,” insisted Ruby. “It’s now more than ever that her writings and warnings must cross borders. Her boldness must call order in the courts of governance.  Daniella is our soldier for St. Martin, the mother of our nation. We are proud to salute her.”

Singer Essence performed the Bob Marley hit “Redemption Song”, and there were performances by calypso artistes Cedric Ray, King Timo and the Jolly Boys. Timo and Brat were Daniella’s favourite calypsonians. Donovan Froston played trumpet and flugelhorn at the Bellevue celebration and at the thanksgiving service on Saturday. On Sunday he played a version of Frank Sinatra’s “My Way.”

Daniella’s son Jean-Marc, known to all as Radio St. Martin’s interviewer, said he had received ideas of how to continue his mother’s legacy and suggested November 10 could become an annual Daniella Jeffry Day in Bellevue gardens, with a yellow Flamboyant tree planted in her name and a plaque with an inscription that had something to do with reading. Yellow was her favourite colour. The suggestions were well received by the audience.

It was a poignant occasion for Aline Choisy, who was Daniella’s best friend.

“She was the leader and we grew up together,” she said. “We were always together and we had a really special relationship. She was everything to me. In life you only have one friend like Daniella. She was more than a friend or a sister. We were so bonded together that I could always tell what she wanted to say. We laughed, cried and cussed together. She was a public figure but also discreet.”

Choisy thanked Bernice Brooks and Carenne Hughes who had supported her during Daniella’s sickness.