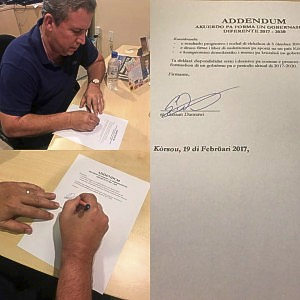 Last Friday Dannawi submitted his resignation after 10 years as a MAN member and continued as independent Parliamentarian. This came as a surprise to many, because he had announced earlier that if he ever left the party he would not take his legislative seat with him.

Another blow for MAN and its leader caretaker Prime Minister Hensley Koeiman came on Sunday, when Dannawi placed his signature under an agreement with the so-called Group of 11 to form a Government for the period 2017-2020. This created some confusion because the Governor recently signed a national decree to dissolve Parliament and call early elections on April 28.

The new majority currently comprises the fractions of MFK, KdNT, MP and PS plus independent Parliamentarians Eduard Braam (ex-PAR) and Gassan Dannawi (ex-MAN), for a total of 12 seats in the 21-seat legislature. This group now wants the dissolution decree reversed so the cabinet it plans to install can complete the existing four year governing term.

They have requested a Parliament meeting, arguing that having an election so soon after the last one on October 5, 2016, is against international treaties calling for a “reasonable period” in between, which supersedes the national decree.

The exact reason for Dannawi’s decision to abandon MAN is still unknown, but he had been unhappy with the way things were going in the party since right after last October’s regularly scheduled election. The party’s vice-president Elfried Koots suspects it’s mainly because Giselle McWilliam was chosen as –in the meantime former- Parliament President instead of Dannawi.