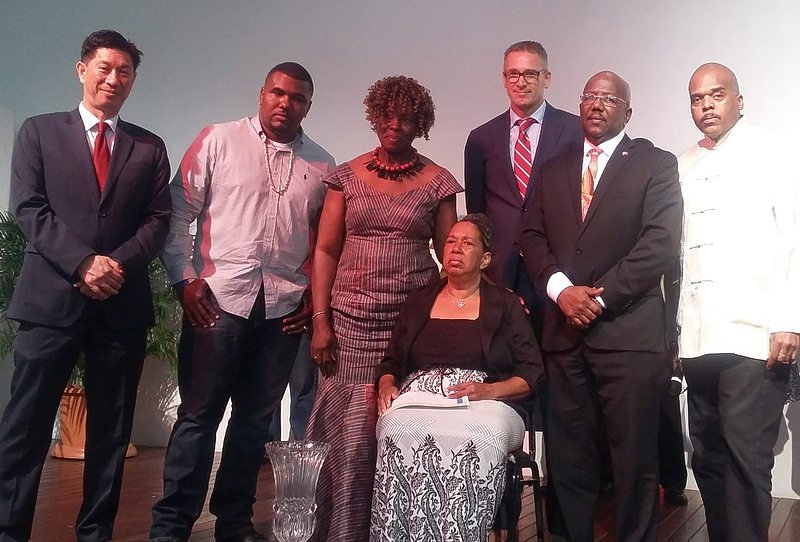 CAY HILL–It was a joyful and emotional evening at the Belair Community Centre on Wednesday when White and Yellow Cross Foundation staffer Daphne St. Rose was announced as the first recipient of the Nurse Orris Jack Bell Award.

St. Rose became emotional and shed joyful tears after she was announced winner of the award from a large group of nursing professionals working at health institutions and organisations across the country. She was congratulated by dignitaries and her son, who joined her on stage to celebrate her accomplishment.

The award was first announced during last year’s Night of the Legends ceremony in celebration of International Nurses Day. The award is presented to a nurse whose work embodies the profession with commitment and dedication to care, similar to nurse Bell, who had dedicated her life to nursing and served some 44 years in the field.

The nominees for the award were Urmiladebie Baidju and Arcides Cristina from the St. Maarten Ambulance Department; Elena Reyes and Daylinda Sevilla from Mental Health Foundation (MHF); St. Rose and Merline Maxwell from White and Yellow Cross Foundation; Emmerita Richardson from the Dutch Quarter Clinic operated by Dr. Sanchit; Claudia Yhan and Nirmala Vlaun from the Department of Public Health; and Antoine Raphael and Carmelita Boyd from St. Maarten Medical Center (SMMC).

In addition to the Orris Jack Bell Award, SMMC also honoured nursing legends who had paved the way for others operating in the profession today

Illidge received a special award for her tremendous role over the years in grooming and educating nurses in the profession and for her dedication to the field. She told attendees at the gala ceremony held at the Belair Community Centre that she is comforted in knowing that the nurses whom she helped groom are capable of carrying on the baton in the field.