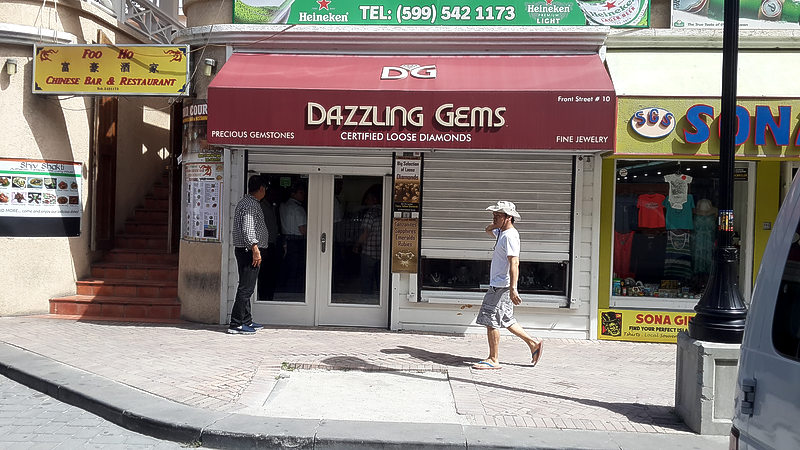 PHILIPSBURG–Police are investigating another major jewellery heist, which took place at 1:40pm Saturday when four men dressed in black entered Dazzling Gem on Front Street and pointed weapons at employees and customers inside.

According to police spokesman Chief Inspector Ricardo Henson, “Four unknown masked and armed men arrived at the store in a blue Suzuki SUV with heavily tinted windows, carrying licence plates of an old taxi. The men used hammers to smash the jewellery showcases and removed a still unknown quantity of jewellery. After committing this act, the robbers fled in the jeep in the direction of Sucker Garden.”

Several police patrols were informed about the robbery and started searching the area for the suspects and the getaway vehicle. The Special Robbery Unit is asking anyone who may have information about this robbery to get in contact with the police immediately by calling 542-2222 ext. 213- 214, or the police anonymous tip line 9300, or 911.

An island visitor videotaped the entire robbery and one of the men waved to persons outside the store before entering the getaway car and speeding off in the direction of Sucker Garden district.

The last Front Street robbery took place on November 3, 2016, when three armed men robbed AMA Jewellers. No connection was made between Saturday’s robbery and the one of last November. Front Street and Back Street jewellers again have security concerns and are hoping that police can crack down on the spike of high-day robberies.

The police need the assistance of the public to successfully carry out these investigations.