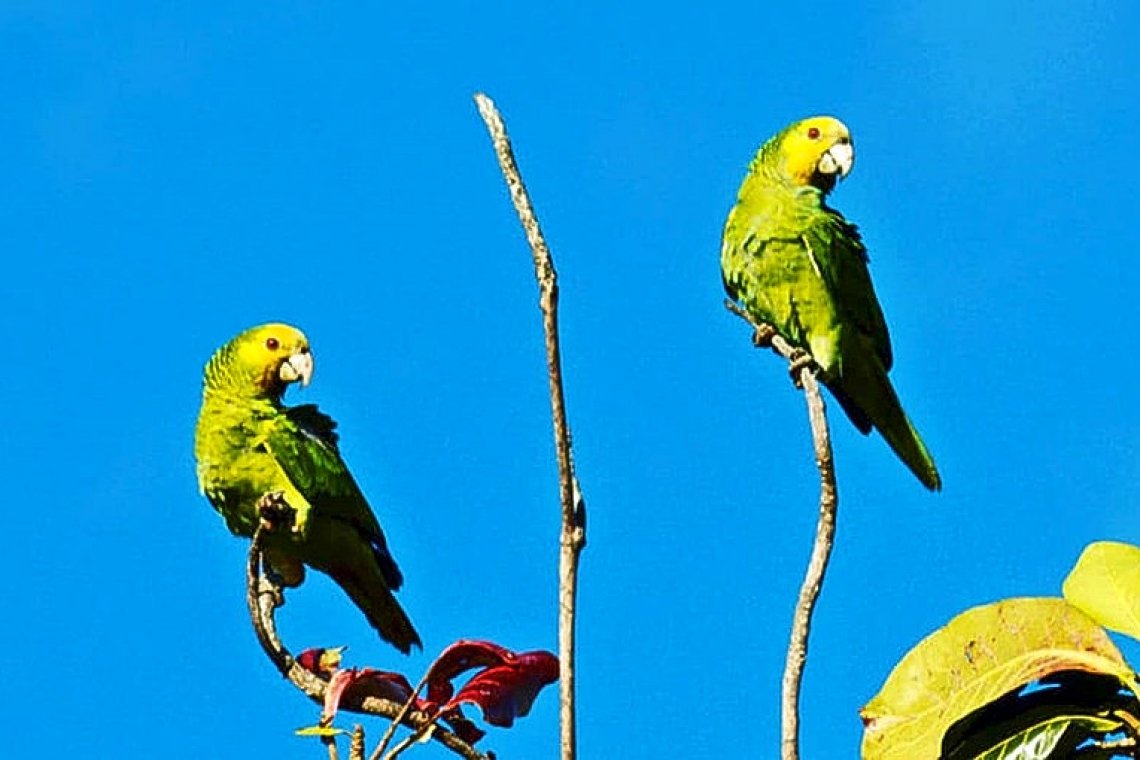 The yellow-shouldered Amazon (Amazona barbadensis) is a parrot that has found a special place in the heart of many Bonaireans. Also known on Bonaire as the lora, it can be seen flying around the island. (DCNA photo)

PHILIPSBURG–The tropical islands in the Dutch Caribbean are home to the most diverse and extraordinary ecosystems within the Kingdom of the Netherlands, from pristine coral reefs to rare elfin cloud forest. The spectacular natural world of these islands includes species found nowhere else on the planet. During today’s, Friday’s, World Environmental Day with the theme “celebrate biodiversity”, the Dutch Caribbean Nature Alliance (DCNA) reaches out to the public to ask them for their help in reporting the extraordinary biodiversity around them. Citizens can help the nature conservation organisations and policy makers by reporting marine and terrestrial animal and plant species on the following website: dutchcaribbean.observation.org.

The biodiversity of the Dutch Caribbean islands is very rich with over 8,000 species recorded. More than 60 globally endangered or vulnerable species thrive in the Dutch Caribbean, including sea turtles, parrots, sharks and whales.

Scientists travel regularly to these islands and have recently discovered seven new marine species around Bonaire. On Saba, St. Eustatius, St. Maarten and the Saba Bank there are at least 35 animal and plant species that exist nowhere else in the world: so-called endemic species. Additionally, 188 species only occur on those and the neighbouring islands. There are only two endemic species recorded in the European Netherlands, which means that the biodiversity of the islands is very rich.

Ecosystems that are rich in biodiversity are a magnet for tourists, and at the same time one of the most important sources of income for local communities. Nature on the Dutch Caribbean islands is unique and important, but it is also fragile and under several local, regional and global threats, such as pollution and climate change.

Knowledge about these complex ecosystems is deemed essential if the natural resources of the islands are to be managed wisely and sustainably so that future generations can also enjoy them.

Not only researchers, but also residents and tourists can help with gathering information. Dutchcaribbean.observation.org is a free online website to register all sightings. Anyone can register and enter observations about species on this platform, which is available in more than 40 languages. The platform is now also being translated into Papiamentu.

Observation.org also offers free apps for iPhone and Android. The species reports by local communities are valuable to nature conservation organisations and policy makers to learn about and protect the species on the islands.

Observation.org is working together with Naturalis Biodiversity Center in Leiden, the Netherlands, on automated species-identification software. Uploaded photos are of great value to make this possible. Therefore, residents are called to help gather a large biodiversity dataset for the Dutch Caribbean.