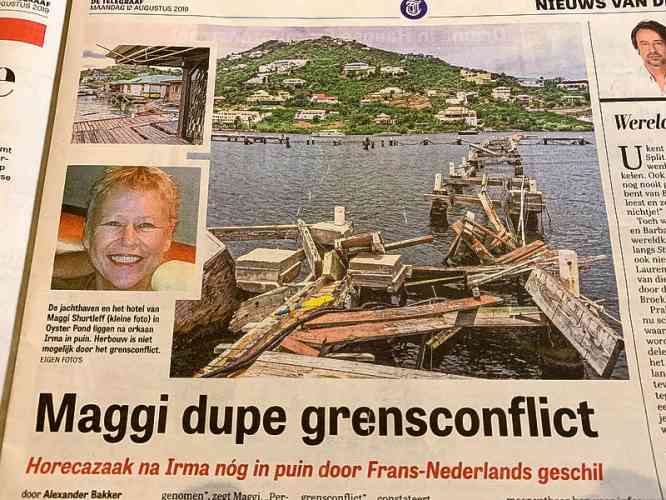 Clipping from “De Telegraaf” regarding the Captain Oliver’s matter.

THE HAGUE–The impossible situation that Maggi Shurtleff of Captain Oliver’s on the border of Dutch St. Maarten and French St. Martin has been finding herself in for several years now was highlighted in the Dutch De Telegraaf newspaper on Monday.

“Maggi victim of border conflict,” was the headline of an article that was published in Monday’s edition of the largest newspaper in the Netherlands. The Daily Herald has already dedicated several articles to the border dispute which keeps Shurtleff from rebuilding the hotel, marina and restaurant.

The heading in the De Telegraaf, “Hospitality business still in shambles after Hurricane Irma because of French-Dutch dispute” perfectly described the issue at the once thriving business at Oyster Pond. Two photos that show the extensive damage to the property confirm the urgency of the situation that De Telegraaf journalist Alexander Bakker described as “bizarre.”

In the article it is explained that the Treaty of Concordia in 1648 divided the “tropical island” into the French and Dutch sides. “However, in one area, the border was not clearly defined, and this is now causing discord between Paris and The Hague.”

Shurtleff explained how the discord had kept her from rebuilding her property. Her partner Oliver, who has since passed away, received permits for a hotel on the French side of Oyster Pond in the early 1980s, but had to turn to the authorities on the Dutch side for the marina and the restaurant.

More than 10 years later, things go wrong; the French authorities claim that the northern part belongs to them. A border conflict between the French Republic and the Dutch Kingdom was born. A status quo was eventually set, but tension rose again when French authorities raided the property in 2016, explained Shurtleff. “I was taken by force. Staff were arrested for not having French permits,” she said.

In September 2017, Hurricane Irma ruined Captain Oliver’s and rebuilding the property in an area that is claimed by two countries was simply not possible. “Before Irma, tourists took photos of the charming Franco-Dutch Captain Oliver’s. Since Irma, they take photos of the sad ruins that cannot be repaired due to an old border conflict. It is unjust to say the least,” said Shurtleff.

The distressed owner, who said the situation has had an adverse effect on her health and her finances, has been trying to sell the complex, but that has also proven impossible because potential investors have dropped out due to the border dispute.

The Netherlands and France have been negotiating for several years in an attempt to reach an agreement, but according to insiders, no solution has been reached as yet. The Ministry of Foreign Affairs in The Hague doesn’t want to react prior to a formal response to the written questions that Member of the Second Chamber of the Dutch Parliament Ronald van Raak of the Socialist Party (SP) has posed.

Van Raak said he wanted to see a solution. “This must be resolved as quickly as possible so that this part of the island can also be rebuilt. What is so difficult about this? It is very strange that we have such a border conflict at all.”