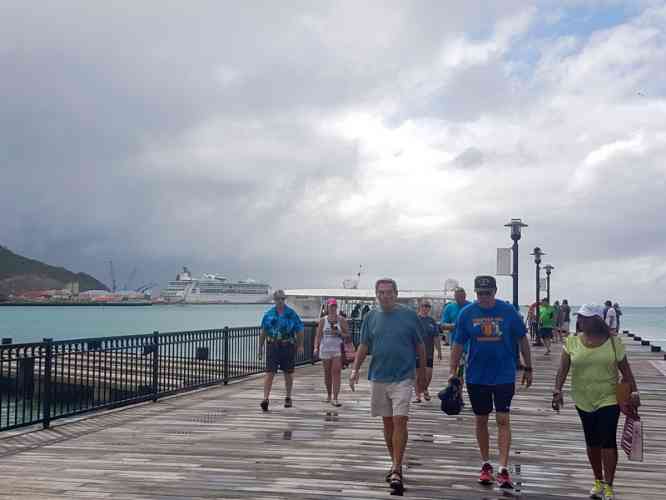 Journalist Alexander Bakker, who was part of the group of Dutch and Belgian media representatives who visited St. Maarten/St. Martin last week on the invitation of St. Maarten Tourist Bureau (STB), described the situation on the island eight months after the devastating hurricane.

Bakker wrote about the large cruise ships mooring and the all-important contribution of the passengers to the island’s economy. “A lot of work has been done since the crisis month September to erase the memories of Hurricane Irma. There are so many excursions and culinary adventures to be enjoyed that one day is not enough for the tourists. Some restaurants and hotels on the boardwalk, such as the well-known Holland House, look good. But looking up to where once there were roofs, one will see blue tarpaulins in many areas. They are scars of an unprecedented natural disaster.”

The article featured several residents, such as St. Maarten Harbour Security Chief Roberto Levenstone, who talked about the importance of cruise tourism for the entire island, the clean-up of the harbour and the quick return of cruise ships.

De Telegraaf journalist mentioned the state of Princess Juliana International Airport and the fact that currently only 29 per cent of hotel rooms are available, though this will increase to 50 per cent by the end of 2018.

In Backstreet, the journalist spoke with June Peters, a 64-year-old grandmother who lives with her daughter Tamara since the hurricane. She showed what was left of her house. “This was my living room and there was my kitchen. It was a beautiful home. Everything is gone. My furniture, my kitchen utensils, washing machine and TV. The concrete walls collapsed just like that,” she said. Still, she was hopeful that with some help, she will rebuild.

The article made mention of the hospitality training programme for dismissed personnel from the hotel and restaurant sector. With the financial assistance of the Dutch government, several hundred persons receive an education, which means an investment in their future. The hotels and restaurants in turn will benefit from employees with an education.

The 19-year-old Adriel from Jamaica explains how he lost his job as a waiter in a large hotel after the hurricane and how he could not find work. He told the newspaper he liked the training programme and he was happy to learn about providing service to tourists.

STB Director May-Ling Chun spoke of the improvements that were being sought to make St. Maarten more resilient. “Buildings are being repaired, restaurants are changing their concept and small hotels are being turned into boutique hotels. The island is getting a new face,” she said in the article.

De Telegraaf closed off the article with a positive message about the renewed cooperation with the French side: “Disasters also bring people together.” Chun had the last quote: “Together with the French, we will put the island on the map as one. We want to get back in the top five of Caribbean destinations.”