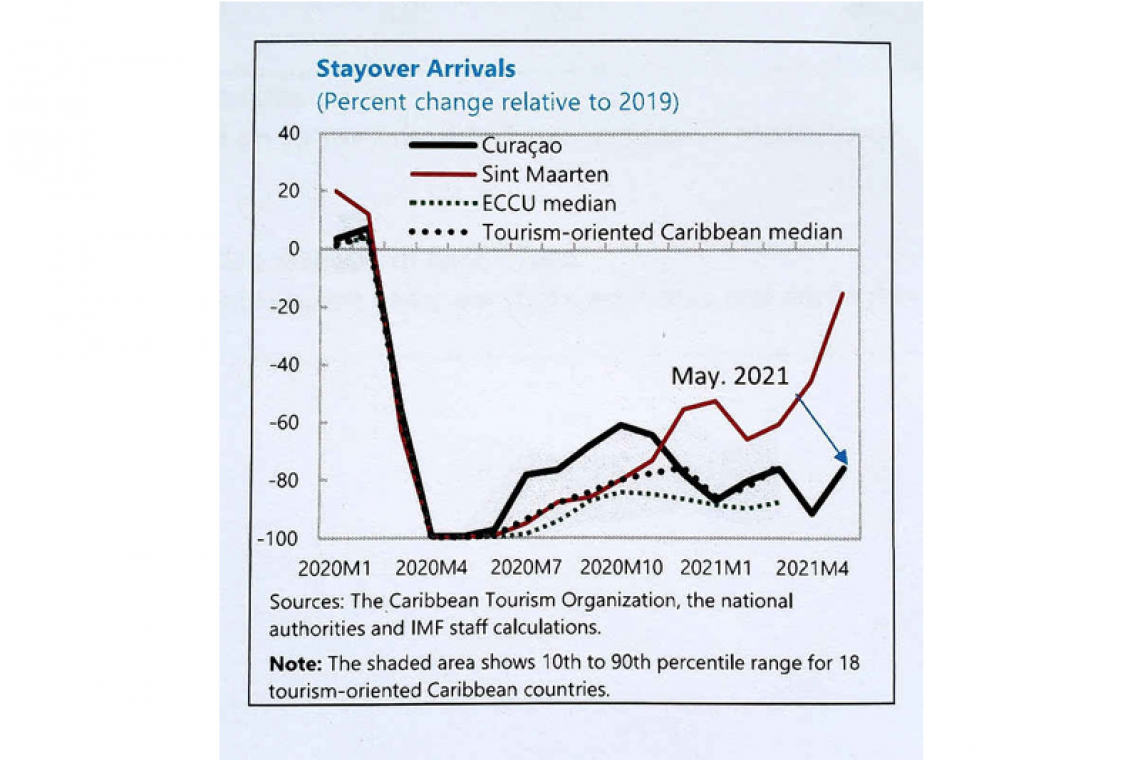 PHILIPSBURG–St. Maarten “is clearly on the rebound” as arrival numbers are on the rise and “practically going through the roof,” former Tourism, Economic Affairs Transportation and Telecommunication (TEATT) Minister Ludmila de Weever said in a press release on Sunday.

The former minister and now Member of Parliament (MP) said the country is “outperforming” 18 destinations in the Caribbean, including Curacao, according to data presented by the Caribbean Tourism Organisation based on the national authorities surveyed and International Monetary Fund (IMF) staff calculations.

De Weever looks back with great satisfaction at her short, but what she called “productive” period in office. She said in the release that “the extraordinary performance” is based on the actual 2021 figures from Princess Juliana International Airport (PJIA). The traffic numbers started slow, but the last three months have shown significant recovery beyond expectations. Despite new restrictions and additional travel requirements imposed due to the manifestation of new variants of the coronavirus. The 2021 average in arrival numbers is just above the expected 50 per cent average of 2019, with 1.5M in passenger movements.

“Compared to almost all other tourism-oriented islands in the Caribbean, St. Maarten experienced the fastest-growing stay over tourism recovery rate since the start of the COVID-19 pandemic,” she said.

“Moreover, as the graph prepared by IMF staff demonstrates, St. Maarten vastly outperformed nearly every island in the region by a wide margin, almost reaching pre-pandemic levels of arrivals by May 2021.”

The recovery policies set in place by De Weever as TEATT Minister, are directly responsible for the growth numbers achieved during her term in office, it was stated in the release.

“At the beginning of her term, De Weever prioritised the restoration in particular of US arrivals to ensure the survival of the country’s hotel industry. Part of this strategy included reopening the airport as early and safely as possible to US carriers and establishing entry protocols that facilitated ease of entry while maintaining the safety of the local community. In addition, the careful and constant balance of the economy and public health kept St. Maarten a relatively

attractive place to visit compared to many other destinations in the region.”

“The data collected so far is a clear demonstration of the success of De Weever’s policies and set St. Maarten back on a path to economic recovery and growth.”

The former Minister of TEATT thanked stakeholders involved and says she remains connected and will continue to dialogue with the relevant executives in the industry.