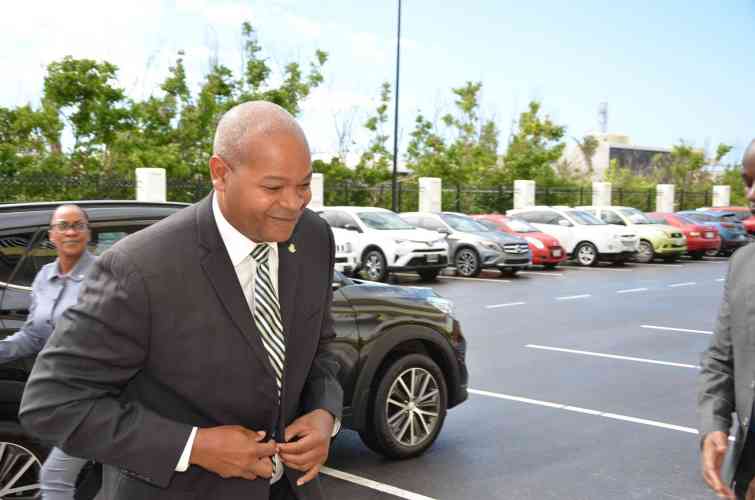 PHILIPSBURG–The St. Maarten Consumer’s Coalition petition calling on government to revisit its decision to not provide motor vehicle tax payers a payment extension until June 1, 2019, will not be honoured.

Justice Minister Cornelius de Weever said on Wednesday that the leniency provided to motorists last year was done given the circumstances in the country post-Hurricanes Irma and Maria and it will not be done this year.

He said the petition submitted by the Coalition to Government last week had been received and had been discussed in the Council of Ministers meeting on Tuesday. He stressed that motorists had had “ample time” preparing for their road tax payment.

“I understand that there will always be some who will not be able to afford [the payment – Ed.], but knowing that you have a car, you have to know that you have to pay road tax, insurance and make sure that your car is inspected and worthy to drive on our public roads,” the minister said, advising motorists to “follow the law and do the right thing.”

In its petition, the Consumers Coalition called on government to cancel the fines police had issued to 21 motorists for non-payment of the 2019 motor vehicle tax and to allow these motorists to make an arrangement to pay this tax in accordance with an announcement made by Finance Minister Perry Geerlings that taxpayers can make such an arrangement.

The Coalition also called on government to refund motorists who have paid fines associated with their vehicles being towed and stored.

“Treat all taxpayers who owe outstanding taxes equal regardless which tax they owe, providing all with a payment plan opportunity of four to 18 months,” the petition read. “Stop harassing and hunting the small man and actively pursue the millions outstanding by companies who owe government taxes and SZV [Social and Health Insurances] social premiums.”

The Coalition bases its arguments in part on statements made by Geerlings that motor vehicle tax payments would not be extended as government needed the funds, and less than a week later he announced an extension to businesses for unpaid taxes in a press release.

Geerlings said a day later at the Council of Ministers press briefing that the extension was “also applicable” to “all citizens.” He had also said there was no distinction on the type of taxes for which an extension can be granted; as long as it is outstanding taxes, the option is there for everyone to make a payment arrangement with the Tax Department.

The Coalition says that motor vehicle tax is a tax and should also fall under the extension announced by the minister.

According to the Coalition in its petition, the decision to fine 21 motorists who owed road tax contradicts the offer made by Geerlings “that everybody who owes outstanding taxes (there is no distinction on the type of taxes) can go and arrange a tax payment plan with the Receiver’s Office.” The Coalition said that by fining the motorists who owe road tax and confiscating their vehicle, motorists are not given the offer like all other taxpayers who owe taxes to go to the Receiver’s Office and make an arrangement plan to pay their motor vehicle tax.

The Coalition also argued that a four-month extension was granted to the small man for payment of motor vehicle tax until June 1, 2018 and the same should also be done this year. It should be noted that the deadline by law to pay this tax was February 28.

The Coalition said government had based its decision in 2018 on the fact that many in the community were still facing serious hardships and choices had to be made such as fixing one’s home, awaiting settlements from insurance companies and awaiting parts/or repairs for their vehicles. The extension had been granted as a form of relief to the community which was still suffering from the effects of the 2017 hurricanes.

The petition was signed by Coalition representatives Claire Elshot-Aventurin and Raymond Jessurun, and endorsed by more than 60 persons.