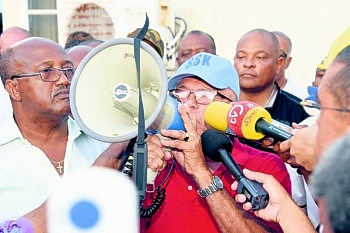 WILLEMSTAD–The agreement that ended Curaçao’s general strike Thursday was put in writing and signed the same night after an urgent meeting of the social partners had led to a solution.

National dialogue chairman Stanley Betrian who led the talks in the Tula Hall of Kura Hulanda read out the “Kòrsou ta Avansá” (Curaçao Progresses) accord at the signing ceremony between Government, the platform of unions and the local business community represented by VBC and the Chamber of Commerce. The private sector made 1.8 million Antillean guilders available for the employees of contractors working at the Isla oil refinery that had been on strike close to three weeks and didn’t get paid during that time.

Their union SGTK and contractors’ association AAV had already hammered out a two-year Collective Labour Agreement (CLA) effective 2017 with annual pay hikes of 6 and 3 per cent. However, SGTK also wanted a one-time compensation of NAf. 3,000 for the lack of a CLA in 2015 and 2016, while AAV said it could give only NAf. 500. The amount transferred to the unions’ lawyer on Friday bridged that gap to break the impasse.

One of the main reasons why the dispute turned into a national strike by 23 unions was a law passed in Parliament supposedly limiting Government-owned companies, foundations and other public sector entities in their freedom to negotiate employment conditions and benefits with their personnel. It was agreed to discuss the matter in a national dialogue for one month at the most and hold back the formalisation of the draft ordinance until then.

The public order decree banning crowds with the intent to disturb the peace was also lifted once the strike ended, although the unions still want a ruling in their injunction against Justice Minister Nelson Navarro on the measure for future reference.

The good news came after a day of widespread power outages and frustration among both locals and tourists. Shops and restaurants in downtown Willemstad remained closed as did local schools. Motorists had to be careful because the traffic lights were not functioning.

The electricity cut affected about 60 per cent of the island, because most production and distribution workers of utilities provider Aqualectra were on strike. Power was restored when they again showed up for the nightshift as also ordered by the judge in an injunction of the Government-owned company against the three unions involved SEU, STK and STKO.