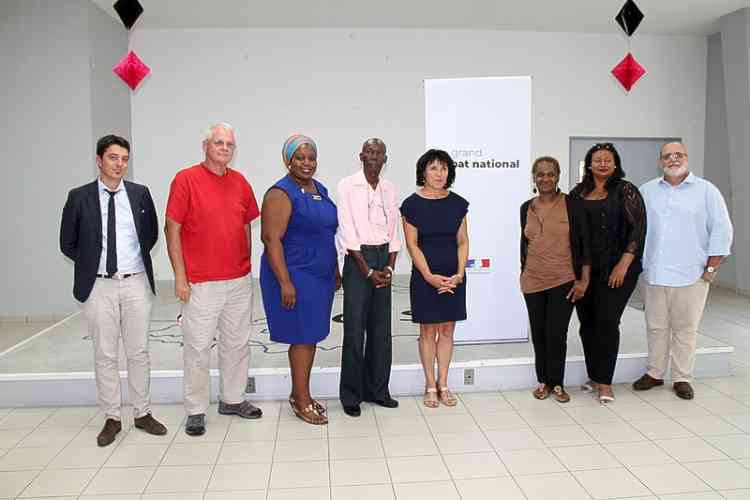 MARIGOT–The six members of the Citizen’s Participation Group held the first of their meetings in the Chamber of Commerce on Tuesday to debate four selected topics related to the Grand National Debate initiated by President of the French Republic Emmanuel Macron in mid-January.

The National Debate was initially conceived to address the grievances of the yellow jackets movement “Gilets Jaunes” and to allow the public to give their input to assist the government with its responses and decisions. The initiative was then opened up to the national and overseas Collectivités, hence the formation of a voluntary Citizen’s Participation Group in St. Martin. Some associations and the Advisory Council of the Collectivité have already debated on some topics.

The members of this participation group were selected a week ago through a draw. From the 16 (six men and 10 women) who applied, six were drawn. The objective was to have a man and a woman from each of the four District Councils. Unfortunately, much to Préfète Déléguée Sylvie Feucher’s regret, no applicants came from the Sandy Ground District. She noted that it is still possible for volunteers from Sandy Ground to be included.

The six who were chosen are Frédérique Poirier and Michel Taylor from Grand Case, Nadine Francis and Didier Bouillon from St. James and Jimmy Gumbs and Maryse Lafleur from French Quarter.

The four themes for the first debate were Ecology Transition, Citizen Democracy, Organisation of State and Public Services, and Finances and Public Spending. The idea is that issues, grievances, opinions and suggestions are forwarded to Paris not only regarding the State, but also from the local level (St. Martin) to show how policies in France impact the overseas territories.

Gumbs described the first meeting as “fruitful.” Carti noted there was no political interference. The group was only given an introduction at the opening and some guidelines about the debates.

“A résumé of this debate will be given to each member of the group and all have to agree on what was said or decided before they can move on the next debate,” explained Carti.

Assistant Cabinet Director for the Préfète Stephanie Le Gagne is coordinating the debates and compiling a report on the exchanges.