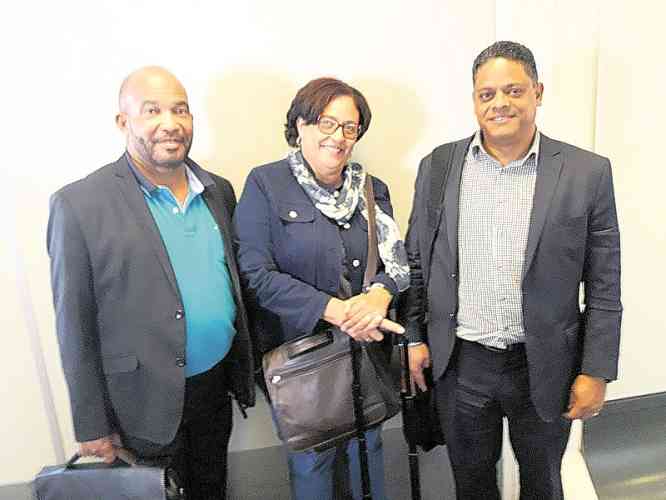 Curaçao ministers upon arrival in the Netherlands.

THE HAGUE–The Kingdom Council of Ministers seemed set to give Curaçao a budgetary instruction during its meeting today, Friday, unless a ministerial delegation from the Dutch Caribbean country can make them reconsider.

The intention is to bring Willemstad’s financial management in order and balance the budget. The local government is struggling with huge deficits, partly caused by the crisis in neighbouring Venezuela.

Previous advice from the Committee Financial Supervision CFT has not been sufficiently followed. Although some meaningful steps were taken, this has not prevented another deficit.

For the third consecutive year, Curaçao has not met the legal norm agreed upon during the Antillean debt restructuring in 2010. The Schotte Cabinet also received instructions for the same reason in 2012.

In total, the deficit is about 120 million euros over the last three years. In addition, Curaçao’s debt ratio rose to 46 per cent of the gross national product (GNP) in 2018, well above the maximum 40 per cent considered sustainable. The liquidity position has also fallen to a worrying level.

The CFT foresees eight additional measures being necessary to comply with the standards of the consensus Kingdom Law Financial Supervision. The aim is to maintain the healthy starting positions of Curaçao and St. Maarten in 2010 and to prevent debt problems, such as those of the former Netherlands Antilles.

From as early as 2016 the CFT indicated in its advice to keep in mind disappointing tax revenues, noting income from the sale of goods and services were also down compared to budget projections, while expenses were higher than budgeted.

The kingdom council will strongly suggest considering eight points and implementing them. One of these points include not taking on any new commitments.

Curaçao must implement tax reform in a budget-neutral manner by January 1, 2020. This includes improving tax collection and introducing a general spending tax.

Measures must be taken to further strengthen public administration and its associated government-owned companies as well as to increase productivity and efficiency. This means that personnel costs within the collective sector must be reduced in the coming years, while the salaries of civil servants and trend-followers must be frozen. The subsidy policy must also be revised.

Should money remain after the deficit compensation, this should be spent on creating frameworks for economic growth, spending on education and reducing tax-increasing measures.

The measures envisioned in the policy areas of medical specialty, international medical services and medicines must be fully implemented to cover the operating deficit of the new hospital.

The AOV retirement age must also be raised to 66 years, while the basic reduction and the elderly person’s allowance must be limited accordingly. Additional measures are also needed, whereby forms of personal payments in healthcare, among other things, must be considered.

The Kingdom Council of Ministers has taken note of the negotiations between Curaçao’s government and the government of the Netherlands in order to reach a mutual settlement within the so-called covenant and has encouraged both governments to follow up on these negotiations.