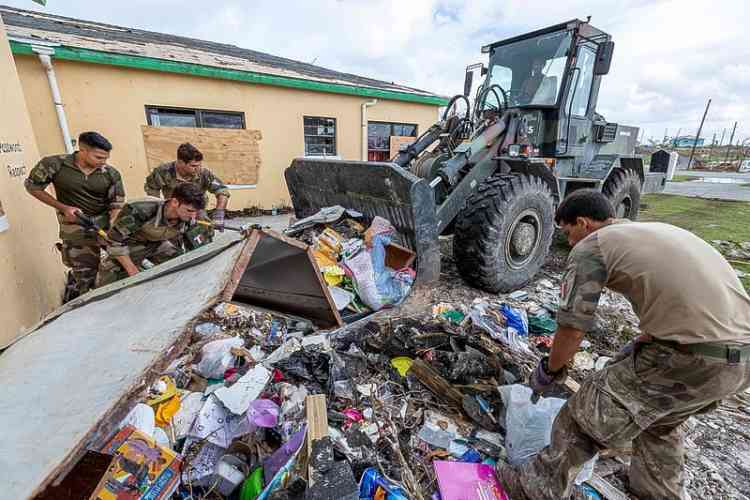 Engineers of the Dutch Marines repair a collapsed bridge that connects the northern and southern part of Abaco. (Dutch Defence photo)

THE HAGUE–The emergency operation of Dutch Defence in the Bahamas ended on Thursday. After the first emergency assistance, the island group, ten days after Hurricane Dorian’s mass devastation, will continue the reconstruction.

In total 550 Dutch Defence personnel, along with 50 French and 50 German Defence personnel, worked hard this week, lending a helping hand all over Abaco island. Due to bad weather, brought on by Hurricane Humberto, Defence started returning its personnel and equipment to the transport ship HMS Johan de Witt. The hydrographic research vessel HMS Snellius already started heading back to Curaçao on Wednesday.

Defence staff offered emergency assistance, distributed food, repaired vital infrastructure and provided medical aid. The civil engineers of the Marines, the Genie, repaired a collapsed bridge that connects the northern and southern part of Abaco. The harbour was cleared of debris under and above water.

Water and electricity were restored at the hospital and the government building. Medical personnel received assistance from Defence medical specialists to restart the hospital’s operations. Electricity and cooling were restored at the morgue, highly necessary to keep the fatal victims of Hurricane Dorian. The military personnel helped to clear roads with their heavy equipment and cleaned up around schools and other public buildings.

In the first days of the mission which started September 11, thousands of litres of water and fuel were taken to unreachable areas of Abaco and surrounding islands with Defence helicopters. Wherever military personnel could reach by foot and by vehicle, food, water and sanitary supplies were handed out to residents. A leaking fuel depot was repaired.

On Tuesday, members of the Royal Netherlands Marechaussee went on patrol with Abaco authorities, assisting the local police in its search and rescue task. Also, some detainees were escorted to the airport from where they were transported to Nassau. The Marechaussee participated in the mission with four members, three of whom are stationed in Curaçao and one in St. Maarten.

Eight days after the mission started, it was concluded that reconstruction was on its way and, therefore, the members of Dutch, French and German Defence could leave. During the mission, Defence worked closely with local authorities and relief organisations.

“We feel that the government is getting Abaco’s situation under control. We are leaving behind something good that local authorities and the people of Abaco can continue to work on,” said Captain Roland van den Akker of the Civil Military Interaction Command. At the Emergency Operations Centre, local authorities, relief workers and Defence coordinated all activities.

Hurricane Humberto and its high waves caused challenges in getting the military personnel and equipment, many of them trucks and all-terrain vehicles, back from Abaco onto the HMS Johan de Witt. This transport takes place with amphibious vessels, which were hard to operate due to the heavy swells.

Through the HMS Snellius, which mapped the bottom of the sea surrounding the southern part of Abaco, a safe location was found where the amphibious vessels could land. The operation to withdraw was sped up with the threat of Hurricane Jerry that will pass close-by over the weekend.