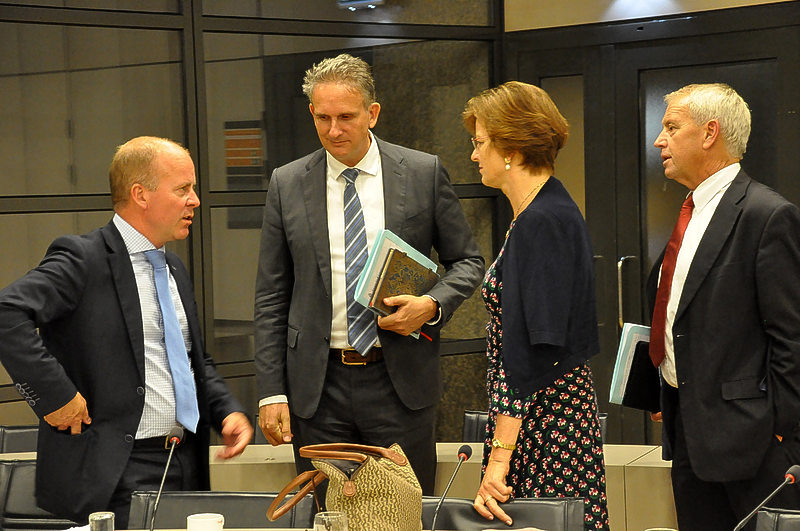 THE HAGUE–The Second Chamber of the Dutch Parliament has urged Dutch Minister of Defence Jeanine Hennis-Plasschaert to keep a sharp eye on the developments in Venezuela, and if the need arises, to increase the military presence in the region.

During a meeting Tuesday evening, to discuss the 2015 annual report and the 2016 annual plan of the Dutch Caribbean Coast Guard, Members of Parliament’s Permanent Committee for Defence expressed deep concerns about the situation in Venezuela and the adverse effects that total anarchy in the South American country will have on especially Aruba, Bonaire and Curaçao with a possible mass migration to the islands.

“Venezuela is a volcano ready to erupt,” said Member of Parliament (MP) Raymond Knops of the Christian Democratic Party CDA. “And, what does the Dutch cabinet do? It sits back and relaxes. The cabinet is naive. We are getting nice words, but no action.”

According to Knops, instead of taking drastic measures, the government has been taking cost-cutting measures at the Dutch Caribbean Coast Guard which have led to a higher workload. He pointed out that little had happened with the June 2015 adopted motion initiated by Knops and MP Han ten Broeke of the liberal democratic VVD party, that motion called for measures to secure regional stability.

Knops said that while the Dutch Government opted to send frigates to the Mediterranean Sea to mitigate boat refugees and to Somalia to prevent pirating, The Hague was apparently not willing to have a frigate stationed in the Dutch Caribbean to safeguard the interest of the islands, which, he noted, were after all part of the Dutch Kingdom.

MP Raymond de Roon of the Party for Freedom PVV asked what the Dutch Government was going to do to prevent mass migration. He mentioned media reports about the rising number of illegal immigrants from Venezuela trying to reach Aruba, Bonaire and Curaçao by boat, which has increased the workload of the Dutch Caribbean Coast Guard. “When the tsunami from Venezuela materialises, will we have a frontline or a shuttle service in place?”

MP Ronald Vuijk of the liberal democratic VVD party said his party was deeply concerned about the situation in Venezuela and the risk that it presented to the safety of the islands. He too mentioned the increased illegal immigration by boats and the drug smuggling criminals who destabilise the region.

MP Angelien Eijsink of the Labour Party PvdA mentioned the importance of having a strong Dutch Caribbean Coast Guard with the increased tension in Venezuela. The cost- cutting measures at the Coast Guard have an adverse effect on the workload of that organisation and the people who work there.

Minister Hennis-Plasschaert said Venezuela was also a “source of concern” of the Dutch Government, but added that for now the sovereignty and security of the Dutch Kingdom were not at stake. Refugee figures had not shown a steep increase either, she stated. She did note that there was always a possibility that this could change.

Hennis-Plasschaert denied that the Dutch Government had a laid-back approach. “We are not leaning back. We are keeping a keen eye in the situation. If there is a need, we will surely take measures.” She explained that the situation was closely monitored and that there was frequent contact between the four governments in the Kingdom.

According to Hennis-Plasschaert, In August 2016, more than 20 persons from Venezuela were arrested at sea near Curaçao. It is generally known that many more refugees have been reaching the islands’ coasts and that they took up illegal residency, with some turning to crime to sustain themselves. “Not all refugees come with good intentions,” said MP De Roon, who called for the immediate deportation of these refugees.

The Minister explained that according to international law, refugees caught at sea were handed over to local authorities who would decide what to do with these persons. In most cases the illegal Venezuela immigrants are sent back to their country. De Roon said he was not assured by the Minister’s answers, and announced that he would request a follow-up debate on the matter for next week.

During a procedural meeting of the Permanent Committee for Kingdom Relations on Wednesday, it was decided to schedule a general debate in the near future to discuss the developments in Venezuela and the effects on the Dutch Caribbean.

Invited will be Acting Minister of Home Affairs and Kingdom Relations Stef Blok and Minister of Foreign Affairs Bert Koenders. The debate will be organised in conjunction with the Permanent Committee for Foreign Relations.